#71 Light of Truth Chapter One


We have not forgotten this blog; rather our focus has been on normalizing our life in these magnificent western North Carolina mountains, this glorious portion of our Father’s creation.  In the many months since the last posting we have settled in somewhat and taken a short journey.  We have also made some modifications to our little lodge in Poplar Cove.  And in the midst of all this, the book, “Light of Truth,” has expanded until it currently has more than 107,000 words.

Our quotation naturally relates to the book.

There is but one law to obey — that is the command to go forth proclaiming the gospel of the kingdom. Cease to fear men; be unafraid to preach the good news of eternal life to your fellows who languish in darkness and hunger for the light of truth. (Urantia Book, 2049.2) 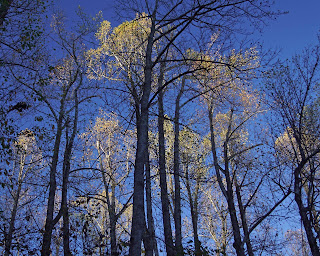 Light in the Trees

One of the joys of life in this cove is watching the interplay of light and shadow.  Every moment there is a shifting shadow or an interesting display of light.  It is fascinating to watch the light of the sun setting behind the ridge above our house as it illuminates trees in our cove.  This is truly a magical space in our Father’s creation.

I have been tracking the weather in Poplar Cove, recording the temperature extremes and rain accumulation.  For example, we have received 35.5 inches of rain in the first six months of this year and more than 57 inches through the last twelve months.  Since we arrived here in late November 2015 we have not had a single temperature reading above 89 degrees.  We have also been tracking the position of the sun, how it changes throughout the year.  There are many aspects of our natural world that continue to amaze us; it is up to each one of us to seek an understanding of our surroundings.  It is through our seeking to understand physical reality that we can also grow in our awareness of spiritual reality because both require a desire to learn truth. 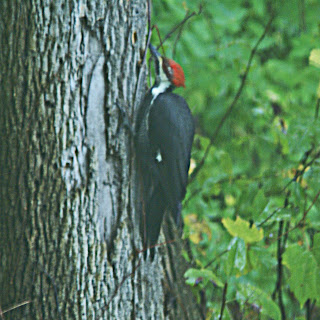 Just yesterday I was sitting at my desk in mid-morning when I looked at my reflection in the window.  Something appeared to be moving; it took me a moment to realize that a young bear had climbed the post on the veranda railing, had his head and front feet above the railing and was looking in at me from about six feet away.  We watched as he casually climbed down, went around to the back of the house, sniffed around the fruit trees then scampered up the bank and into the woods.  We were certainly glad that we were inside and little bear and mommy (wherever she was) were outside.  These hills have belonged to them far longer than they have belonged to us. 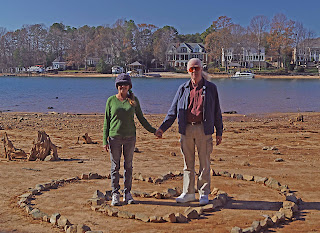 We took a short journey to Charlotte to visit friends; as you can see from our attire this was not recent, actually we went there a few days before last Christmas.  Jetton Park on Lake Norman is a 106 acre park on the lakeshore and is an excellent place to get fresh air and enjoy the out of doors.  We had a great walk along the lake, but as can be seen, the lake level was a bit low.

There is a vibrant Urantia Book study group in Charlotte, but the timing of our visit did not allow us to attend their meeting.  We did meet with the group leader and his wife at Freshwater Restaurant in Charlotte.  We truly enjoyed an evening of music, food and friendship at this lively establishment.

The remainder of this posting is a condensed version of Chapter One in the book “Light of Truth.”  More excerpts will be forthcoming in future posts.

Five hundred thousand years ago our planetary prince, Caligastia, arrived to take over leadership of this planet and to guide its inhabitants toward a fuller understanding of themselves, the nature of God and His creation (UB 741.2).  While Caligastia is invisible to mortals, he brought with him one hundred physical beings who were similar in appearance to our ancestors and were therefore able to interact with the mortals of the realm who had been evolving for about five hundred thousand years at that time (UB 742.3).

Caligastia’s superior in the local government, the system sovereign, was a brilliant being.  After passing through the universe training schools his boss was ranked number 37 out of more than seven hundred thousand similar beings (UB 601.1).  He subsequently became the sovereign of our local system.  More than two hundred thousand years ago he went into open rebellion against higher authority.  Caligastia’s boss was Lucifer and the assistant was Satan, you have heard of them from the Bible.  Caligastia joined the Lucifer rebellion against the universe government.  This event was a disaster for the nascent civilization on our planet. 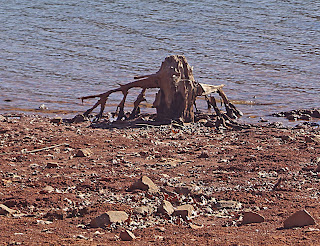 The Monster Rising out of the Lake

(I found this stump in Jetton Park to be compelling; it looked like some monstrous apparition crawling out of the lake.  Somehow it fits here.)

Lucifer, the system sovereign, was the instigator of the rebellion.  Nobody suggested anything of the sort to him; the rebellion originated totally in the mind of Lucifer (UB 603.1).  Not only did the rebellion originate with Lucifer, there were no specific problems in our system that could have been a catalyst for a rebellion; there were no glaring deficiencies that needed correcting.  Lucifer could have originated his rebellion wherever he might have been stationed (UB 602.5).  He was a brilliant personality and this deceived many because they could not understand how anybody that magnificent could lead them astray.  Depending blindly on authority can be a risky business for anybody.  Instead of some “authority,” our allegiance should be given to our Heavenly Father.

Self-assertion was his rallying cry (UB 604.4); he declared that each of us must assert our rights and seek our own personal liberty.  This doctrine of selfishness and greed has appeal even to some in our own times.

There is no error greater than that species of self-deception which leads intelligent beings to crave the exercise of power over other beings for the purpose of depriving these persons of their natural liberties. The golden rule of human fairness cries out against all such fraud, unfairness, selfishness, and unrighteousness. Only true and genuine liberty is compatible with the reign of love and the ministry of mercy (UB 614.3).

Before this rebellion our planet had made progress, the light of truth was being gradually introduced.  But as a result of Caligastia’s betrayal, the cultural gains that had occurred since his arrival were mostly lost and the consequences are still being felt by all of us today.  An understanding of this betrayal is necessary for us to comprehend the problems of our existence on our native sphere in these times (UB 754.1).  We all have lived with the consequences of his actions and all human history has been altered (UB 752.4) in such a way that this abnormal planet appears to us to be the way things should be.  It is as if we lived upside down all our lives and are certain this is the natural state of things.

Caligastia succumbed to the lure of pride of self and personal glory, as a result everyone born on this planet since has been given an inaccurate image of truth; the mass of society has sought out materialistic gains over spiritual gains.  We seek short term goals instead of eternal goals.

When we make the slightest compromise with evil, when we make the slightest assertion of our own rights over those of others, this constitutes falseness.  Evil may reside in the smallest of decisions and if we follow these small decisions we will be heading into falseness or possibly worse.  Caligastia chose to follow Lucifer in open rebellion.  Caligastia thought God’s plan could be improved upon and the result was total disaster.

His betrayal precipitated world-wide confusion and robbed all subsequent generations of the moral assistance which a well-ordered society would have provided (UB 382.4).