There has been a slight change in the name for this blog: it is now the Wandering UrantianS.  Betty Lou and I have purchased a house not far from Asheville, North Carolina.  Since the last posting we went to the Parliament of the World’s Religions in Salt Lake City and hopefully the next blog will present something of our experiences and impressions from that exhilarating gathering, but this posting is about our new house.  We still plan to travel and visit Urantia Book study groups, but now we will live in a fixed home instead of having to drag our house around the countryside behind us; we can still stay in campgrounds by renting a unit in areas we which to visit.  Let’s get started exploring our new dwelling space.

We know that we were led to this place and guided by faith to reside here at this time.  There have been too many “coincidences” for us to believe otherwise.  For this reason the theme for the quotations in this posting is living faith.

Man cannot cause growth, but he can supply favorable conditions. Growth is always unconscious, be it physical, intellectual, or spiritual. Love thus grows; it cannot be created, manufactured, or purchased; it must grow. Evolution is a cosmic technique of growth. Social growth cannot be secured by legislation, and moral growth is not had by improved administration. Man may manufacture a machine, but its real value must be derived from human culture and personal appreciation. Man’s sole contribution to growth is the mobilization of the total powers of his personality — living faith.  The Urantia Book (1097.4) 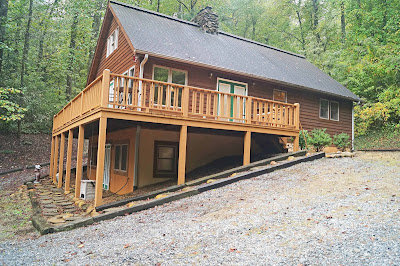 A side view of our house


Not long after we agreed to get the house I called my brother in Florida and told him I did not need the lawn mower and he could pick it up when he visits in the spring.  This photo shows why, also neither of Betty Lou nor I have a fondness for extensive lawns.  Technically the house has only one level.  The lower level has two bedrooms, one of which will become an office, but they are below grade, have no windows and do not therefore qualify as an occupied level.  There is also a loft that has two queen size beds and into which we hope to get exercise equipment someday. 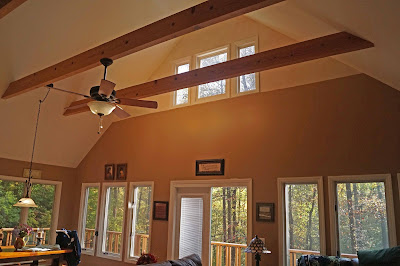 On the main floor the entire front of the house is one open room.  One side has the dining table while the other has the entertainment center and another office is in the corner.  Between them is a large fireplace, while the kitchen is behind the dining area.  There are four doors to the outside and loads of windows.  Elsewhere on the main level there is a tongue and grove ceiling with exposed beams, even in the bathroom!  The previous owner left many things for us, including a well-stocked kitchen (neither of had ever seen such a large toaster). 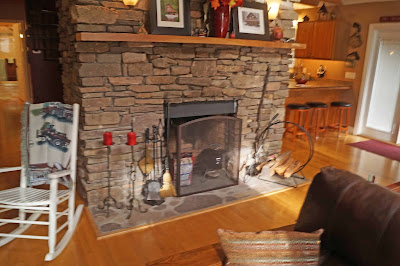 The natural stone fireplace is magnificent.  The two photos of the house in summer and with snow on the ground on the mantle were left as were several photos of a black bear walking around the house.  The final bear photo shows him walking calmly down the middle of the driveway on his way out.  The rocking chair was not left, so we will need to find another. 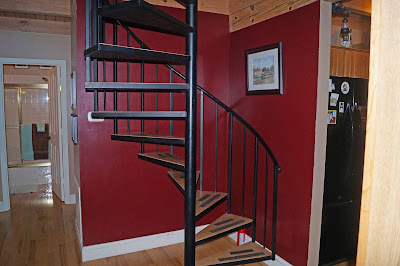 Stairway to the loft

These stairs are surprisingly easy to navigate and lead to the loft.  It would be nice to be able to exercise in the loft on cold winter days.  The other day I did a power walk of about four miles from the house; I went through a nearby campground and then onto a trail through the woods.  This is beautiful country. 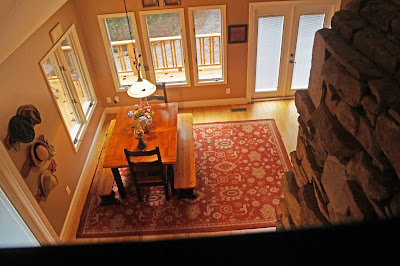 View of dining room table from the loft

The colors used throughout the house are excellent; the previous owner had good taste in selecting them.  There was some question as to whether she would leave this fine table but in the end it was there when we took possession.  It even has an extra leaf that swings up from underneath in the middle of the table. 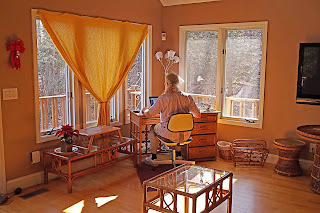 At work in the Office

One corner of the great room has been converted into an office.  From there I have a view of the driveway out one set of windows and one of the hillside out the other windows.  We are still in the process of organizing things and we need a couple of chairs, but things are definitely looking better.  By the way, the small poinsettia on the table by the window was a present from the bank loan officer.  She stopped by at closing just to give it to us. 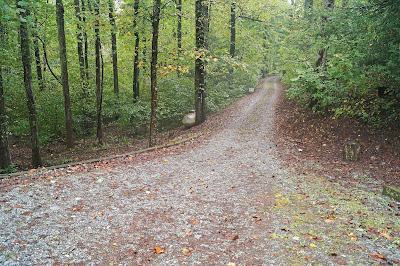 How is this for a driveway?

The first photo shows that the house has a veranda on three sides; this one is the view of our driveway from the veranda.  The closing was late in the afternoon of the day before Thanksgiving and we were determined to stay in the house that night.  It was dark when we got there, but we made it inside without incident.  We fired up the propane furnace and soon were cozy.  Most of the above photos were taken in late October when the trees had their leaves but by Thanksgiving the leaves had fallen.  That first night in our new house there was a full moon with clouds drifting past.  We stood on the veranda, surrounded by the bare trees reaching upward and marveled at the wondrous sight.

Your religion shall change from the mere intellectual belief in traditional authority to the actual experience of that living faith which is able to grasp the reality of God and all that relates to the divine spirit of the Father. The religion of the mind ties you hopelessly to the past; the religion of the spirit consists in progressive revelation and ever beckons you on toward higher and holier achievements in spiritual ideals and eternal realities.  The Urantia Book (1731.2)

To receive a notice of future postings send me an email at: wanderingurantian@disciples.com.