#21: Since my last posting I have moved from Highlands, Texas back to Livingston, Louisiana and on to Jacksonville, Florida.  While in Louisiana I visited the Bayou and did a bit more exploring.  I am now in Ladson, South Carolina, which is west of Charleston, just off I-26.  I expect to stay here until the end of this month when I will continue northward; I am in no great rush to go farther north just now, it was 43 degrees here last night.  Last time I told about visiting a study group at the home of Ralph and Linda in Texas and the magnificent dining room table they have; Ralph was kind enough to send me a photograph of the table (thank you), in the background is the ‘throne’ I was seated on.  That is certainly a Texas sized table!  Next year I hope to spend more time in that fine state. 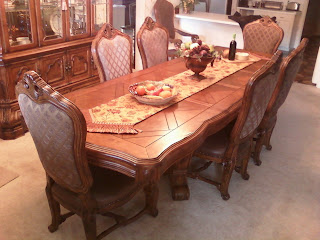 “Material evolution has provided you a life machine, your body; the Father himself has endowed you with the purest spirit reality known in the universe, your Thought Adjuster. But into your hands, subject to your own decisions, has been given mind, and it is by mind that you live or die. It is within this mind and with this mind that you make those moral decisions which enable you to achieve Adjusterlikeness, and that is Godlikeness.”  The Urantia Book (1216.5) (111:1.4)

A brief explanation is in order for those who are not readers of The Urantia Book.  The Adjuster, or Thought Adjuster, is a part of God that resides within each normal minded human being.  It is the interaction between the Adjuster and the human mind, based on our free will choices, that brings into being our potentially eternal soul.
The only incident I had returning to Louisiana from Texas was when I attempted to fill the fuel tank on the Monster (Ford F350) and the credit card was denied.  After calling the card company (twice, with waiting each time) the problem was that I had used it the day before in Texas, I guess it is OK to go from Louisiana to Texas but not to return to Louisiana.  I had to give them a list of all the states I might be visiting this year, but how would I know? 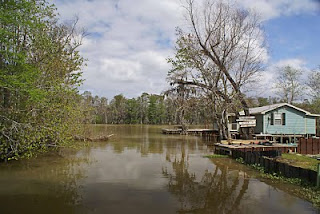 Once the credit card allowed me to continue I made it back to Livingston, Louisiana where I stayed a few days.  I visited Anthony on the Bayou for the day.  We had hoped to get out on the water but his outboard motor did not cooperate.  To search for outboard motor assistance we drove eight miles along Four-mile Swamp to a group of buildings nestled alongside the waterway that included a snack bar, picnic tables, loud music, a gas pump for the boats and marine repair facilities.  The boat mechanic took time out from fixing burgers and French fries for his customers to listen to Anthony’s description of the motor’s difficulties and instantly rendered the verdict “fuel injector problems.”  That being settled we spent the afternoon at Brian’s house, located directly on the waterway.  Brian had prepared Jambalaya and I, being no connoisseur of such things, thought it excellent.  Anthony however, thought it a bit too ‘something or other.’
The only other exploring I did was a short trip to Lake Martin, it was interesting to see Great White Egrets with breeding plumage filling the Cypress trees but it was a bit far, 160 miles round trip! 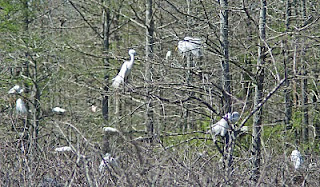 Before I left Louisiana, the Baton Rouge group came to the Wyoming (the fifth wheel I live in) in the campground for their meeting.  This time the web camera and software worked perfectly and Charles was able to broadcast the meeting.  Before starting to read Virginia told viewers they were meeting in my 'house.'  They meet every other Wednesday and web cast their meetings, send me an email if you want information.  This time we read Paper 122, Birth and Infancy of Jesus.  Peter brought another King Cake, which we enjoyed.  The next day I started on my journey toward Jacksonville. 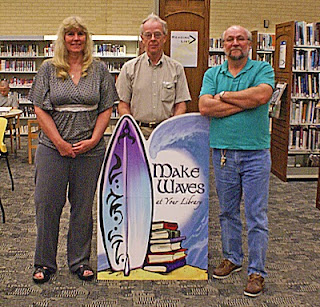 The Jacksonville group used to meet in Paula’s apartment but she has moved, they now meet in the Library, which has small meeting rooms for the purpose.  During the meeting we read the first half of Paper 110, Relation of Adjusters to Individual Mortals.  Again, I enjoy just talking with fellow readers about the revelation.  After the meeting I got my camera equipment and set up to take the photograph.  The library was quite full, with the Internet computers being especially busy; I set up the tripod and camera without asking permission and nobody said a word.
Next time South Carolina!
“Be not discouraged; human evolution is still in progress, and the revelation of God to the world, in and through Jesus, shall not fail.” The Urantia Book (2097.1) (196:3.33)