I am currently preparing to give a plenary presentation at the 2014 Study Group Symposium in Madison, WI next week; this will be a new experience for me.  Since the last posting I visited an excellent study group in Charlotte, NC for the first time; I also revisited the Asheville, NC group.  I did a bit of exploring in the Smokeys and then moved on to Virginia where I visited Dick and Janice in Lynchburg.  While there I also did a bit of exploring in the woods where I saw both Mountain Laurel and Rhododendron in blossom and followed a Black Racer snake down the path.  After Virginia I moved on to my summertime parking place in southwestern New York State at the Hidden Valley Camping Area near Jamestown.  After a muddy parking experience my house on wheels is now situated for the summer.  Let’s get started!

The visit with the Charlotte group was such a spiritual joy that this is the subject of this posting’s quotes.

Jesus made it plain that he had come to establish personal and eternal relations with men which should forever take precedence over all other human relationships. And he emphasized that this intimate spiritual fellowship was to be extended to all men of all ages and of all social conditions among all peoples. The only reward which he held out for his children was: in this world — spiritual joy and divine communion; in the next world — eternal life in the progress of the divine spirit realities of the Paradise Father.  The Urantia Book (4593.6) (141:7.5) 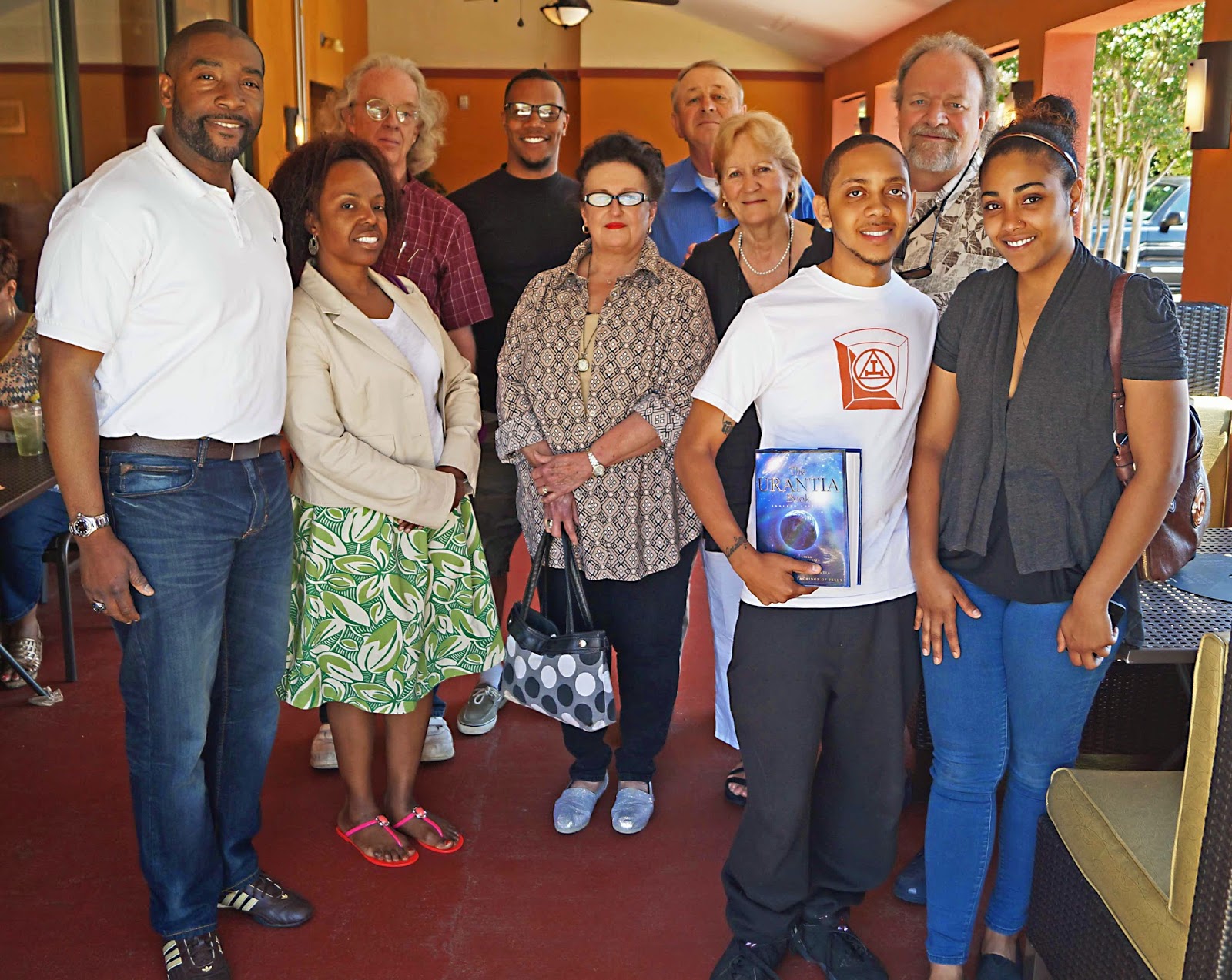 Left to right: Markel, Balerie, Wandering Urantian, Moses, Cynthia, Manning, JoiLin, Chavon, Eric, Estephania.
While my house on wheels was parked near Asheville, NC I drove to Charlotte to visit the study group there.  This was truly a spiritual joy to participate in; I cannot remember many meetings that I have enjoyed more.  This group currently meets on Saturday mornings in a Panera Bread restaurant.  Manning and Cynthia drove up from near Charleston, SC to join me for the meeting.  As can be observed in the photograph, the group is mainly black and has young members; there was one other member who could not stay for the picture.  Everyone seems to have joy on their faces; this was a natural outcome of the meeting, not something forced afterward.  The week before this meeting the group did community service at a nearby food bank; Moses commented to the group on how satisfying this experience was for him.  This is what we all should be about, manifesting the fruits of the spirit.  The group said a prayer before and after the meeting which sets a spiritual atmosphere that is beneficial to all.  We read Paper 127, The Adolescent Years (if I understand my bookmarks correctly) and the bustling of the other patrons in the restaurant did not bother us at all.  There was a good dialog and sharing, but it was the feelings of brotherhood and joy that most impressed me.  It was a two hour drive back to Asheville and I was on a spiritual high all the way back; at one place I had to exit the road I was on to see where I was. 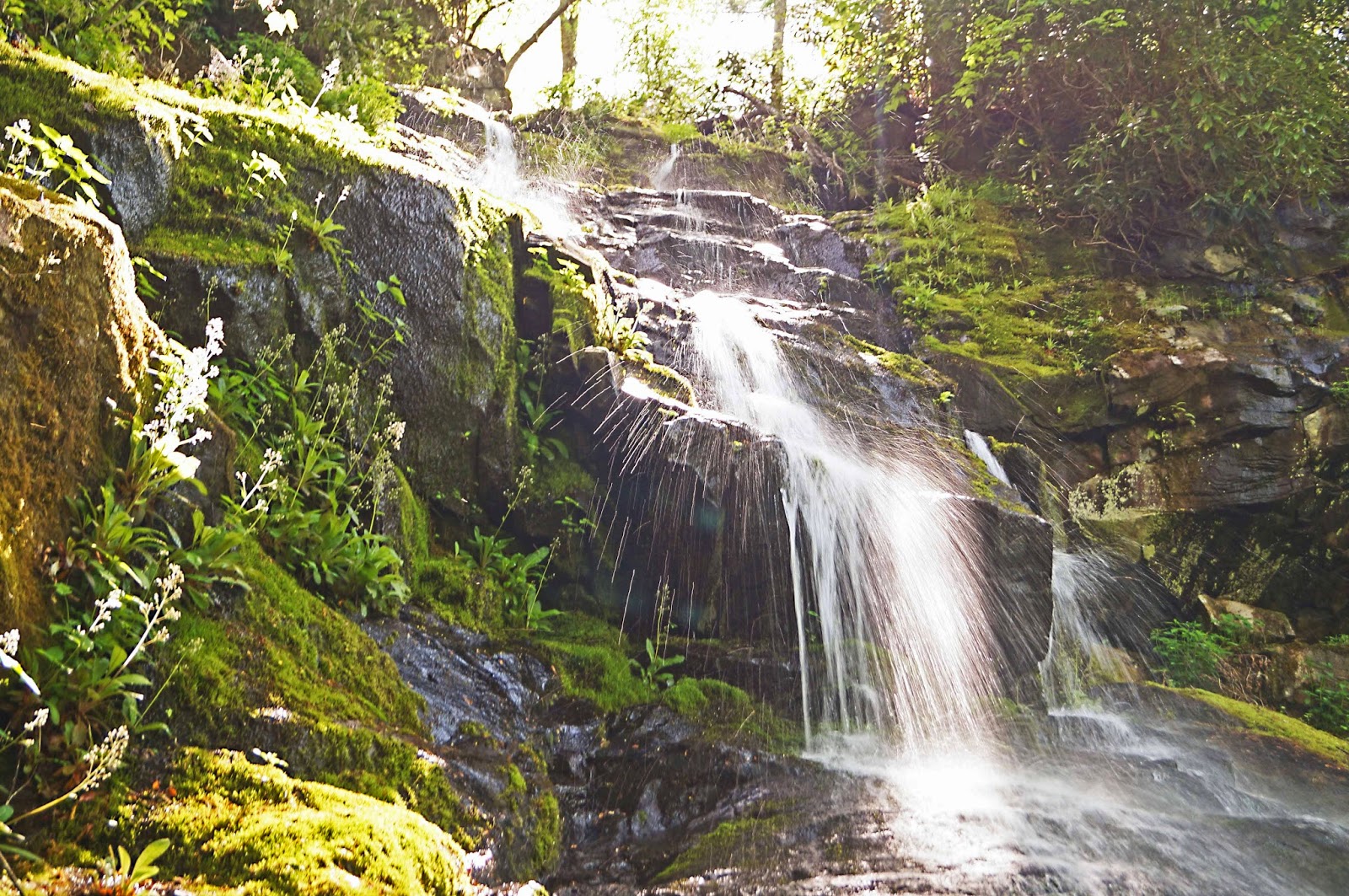 I also attended the Asheville group where we read Paper 196, The Faith of Jesus. As usual, this group had a good meeting.  Neither of these groups knew about the other; now they expect to visit each other on occasion.  After the meeting Debralee and I went to the Straightaway Café for some live music.  We also briefly visited the Light Center near Black Mountain. Their Vision is “To provide an environment that supports individual and universal transformation through effective prayer, compassionate education, service, and creating Good moment by moment.” This is truly a peaceful place.

I also took out a day to explore a bit, including a hike to Hen Wallow Falls.  I had been on that trail a couple of years ago and decided to repeat the hike.  It is a somewhat strenuous climb, but not bad and the falls are picturesque. 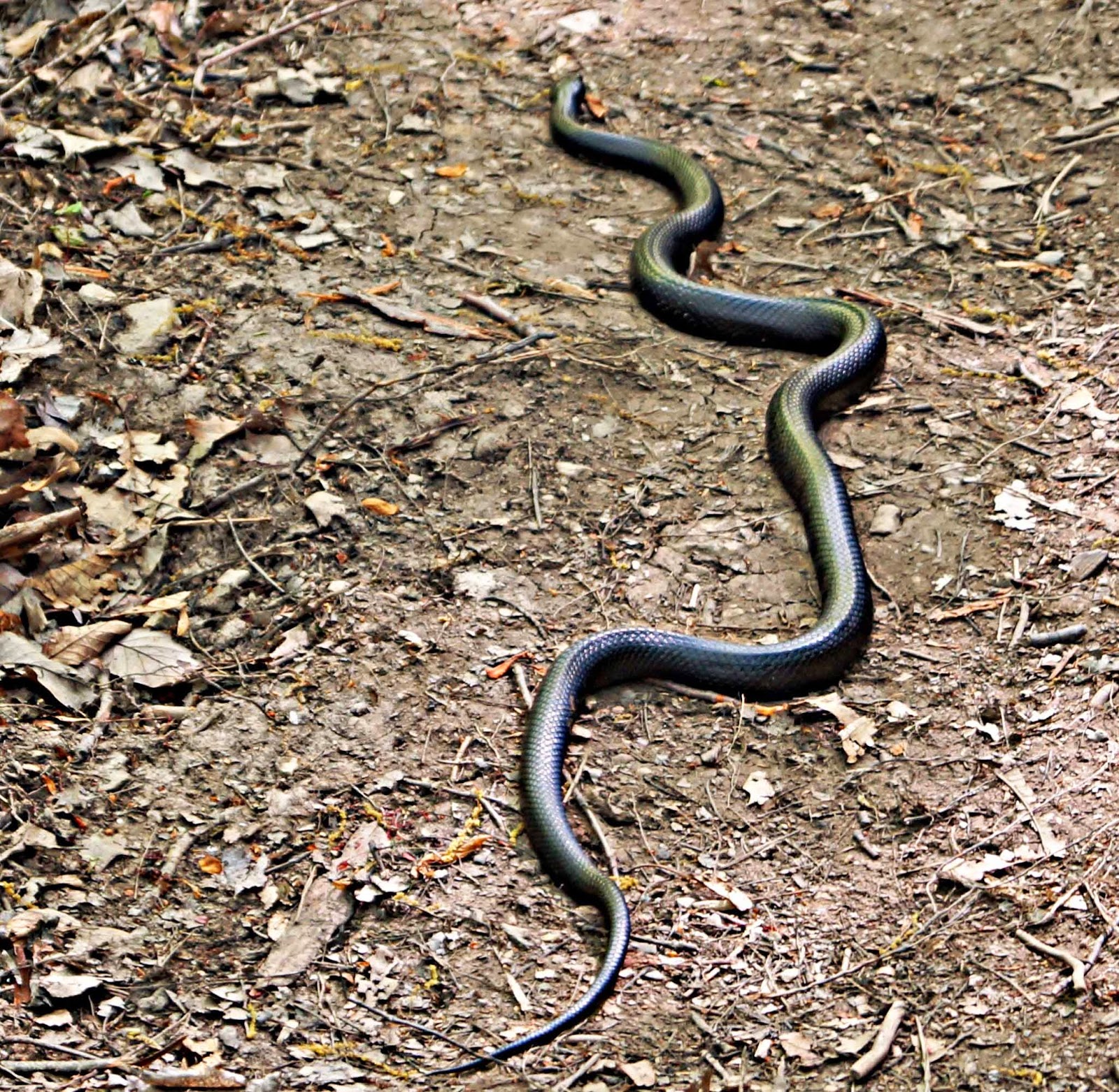 As I was climbing back down the hill this handsome fellow appeared right in front of me on the path.  At this point the path was a bit narrow so I had to follow him for a while until we came to a place where I could go around.  The Black Racer snake is not poisonous, but it can be aggressive and is known to bite so I thought I would bide my time and catch my breath while I waited for a passing lane.  I guessed him to be about three feet long or so. 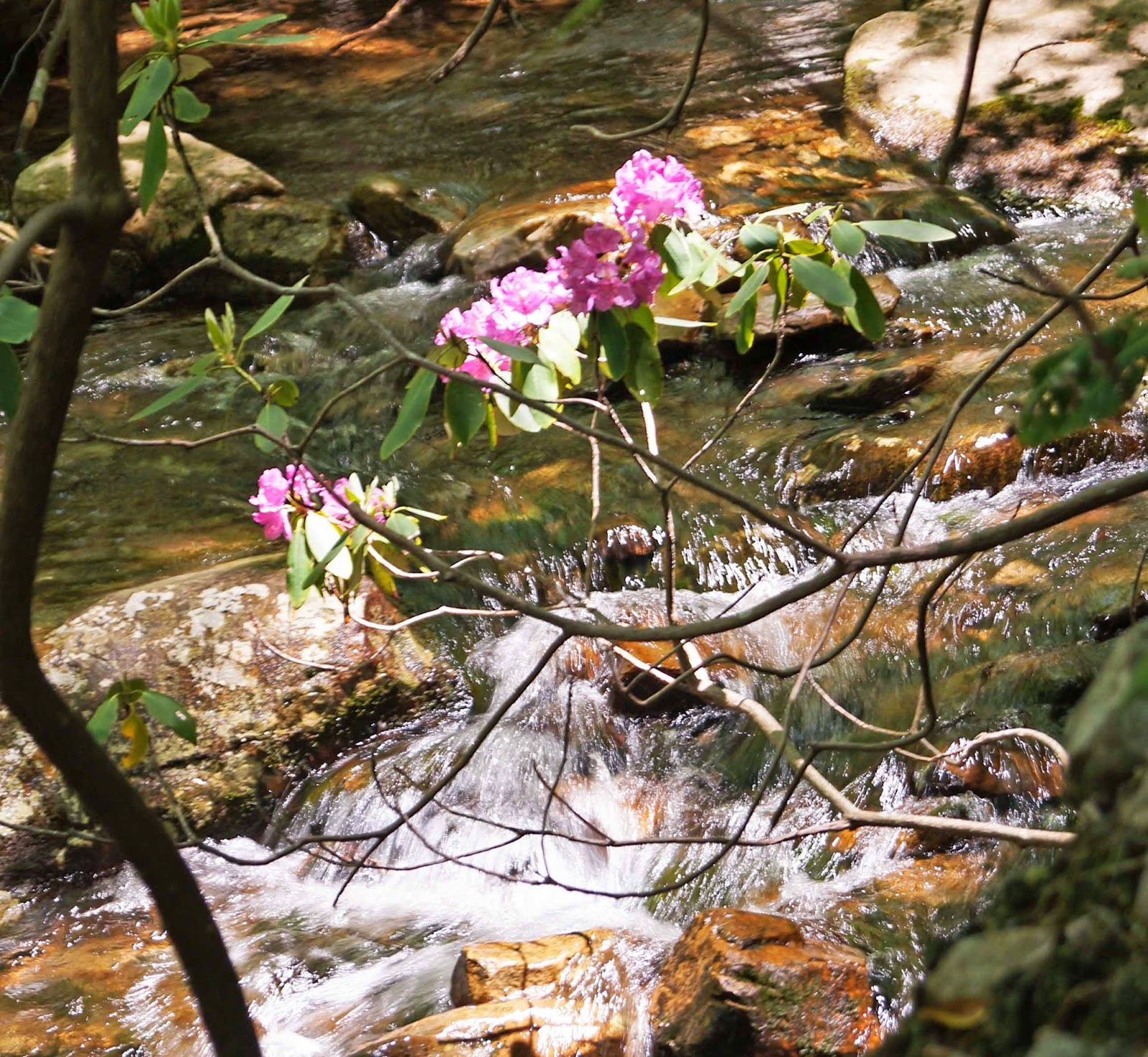 Frequently while in Virginia I park at a Yogi Bear campground not far from Natural Bridge; once a few years ago I discovered an interesting trail behind the campground that I like to follow.  This year I took a different branch of the trail and saw both Rhododendron and Mountain Laurel in blossom at the same time.  Naturally they were not next to each other but they are beautiful to observe in the wild.  Rhododendrons are frequently seen in gardens and they are picturesque in those settings, but finding them in their natural habitat is even better; this is their natural state. 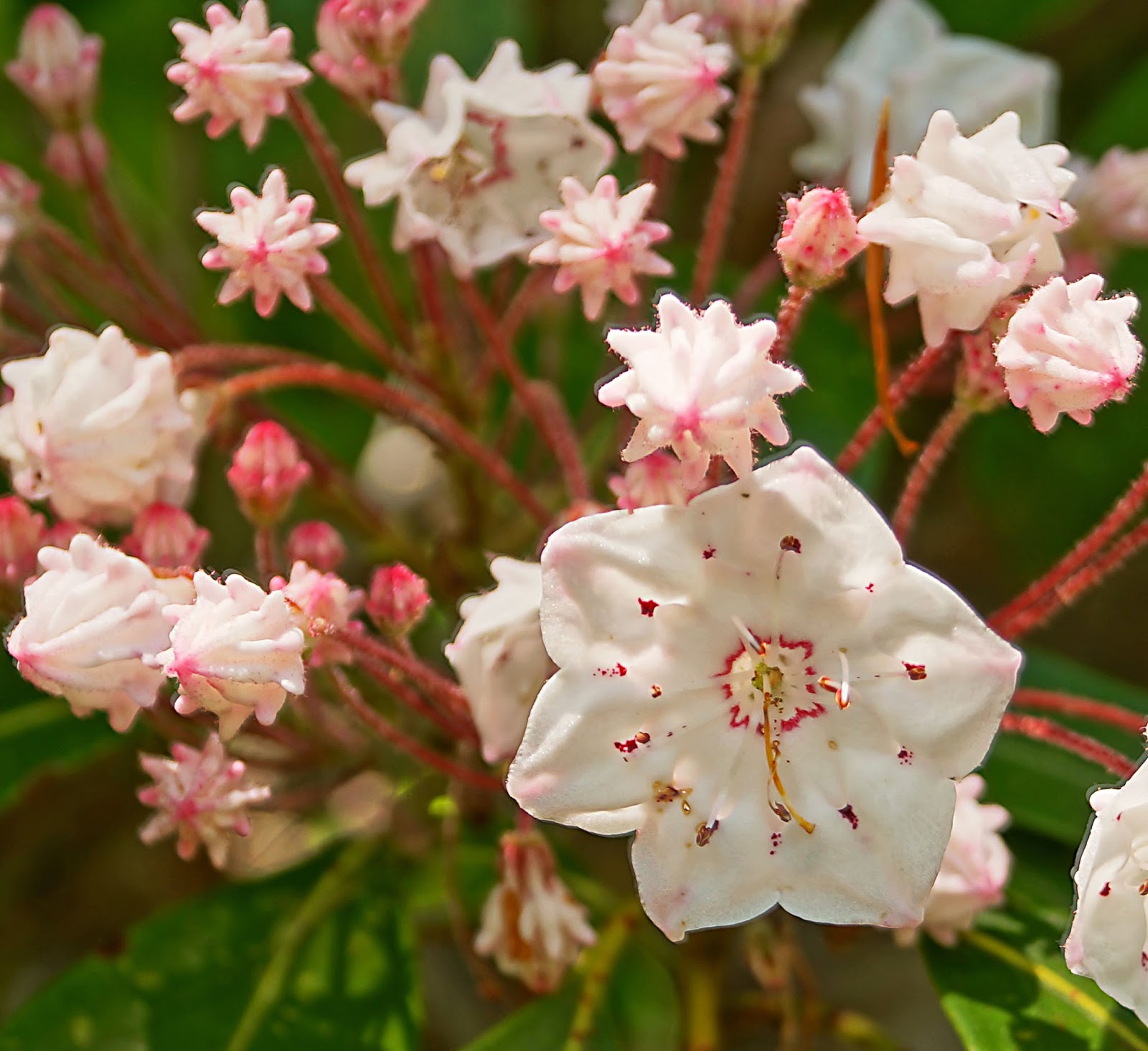 I arrived at my summertime parking area the day after a substantial rain storm; just before getting to the campground I had to take a detour because the other road was flooded.  Before starting out that day I had been afraid I might get caught in a storm during the move based on weather reports.  That did not happen but parking my “house” was an adventure.  It is a tricky spot to get into even in the best of times and I do not attempt it.  Eventually it did get parked but not before a few deep ruts appeared in my lawn and my deck was moved aside.  I am well parked for the summer but the tires on my camper look as if they drove through quicksand.  That is not very far from the truth.

Next time: the symposium.

The old Passover commemorated the emergence of their fathers from a state of racial slavery into individual freedom; now the Master was instituting a new remembrance supper as a symbol of the new dispensation wherein the enslaved individual emerges from the bondage of ceremonialism and selfishness into the spiritual joy of the brotherhood and fellowship of the liberated faith sons of the living God.  The Urantia Book (1942.1) (179:5.2)