#23:  After a few months of wandering I have at last arrived at Hidden Valley Campground and am settled in for the summer, more or less.  The journey northward from Florida to Louisiana, Texas, South Carolina, Ohio and finally southwestern New York State has been a pleasure.
I received an email yesterday from Anthony who lives in Morgan City in the Louisiana Bayou in response to my inquiry about the status of the waters in his area.  He said they have not been asked to evacuate yet but they have plans just in case.  It is terrible to think that the beautiful areas I just visited there might soon be inundated by floodwaters.
Before I begin describing the last leg of the northward journey, I recently received an email from George who has an excellent web site, Urantia Book Related Web Sites, which contains links to many interesting and informative sites, including this blog.  He asked for my mailing list; I am considering sending him such a list after removing those of you who are not Urantia Book readers.  If anybody has a problem with this please let me know.
“Most of what a mortal would call providential is not; his judgment of such matters is very handicapped by lack of farsighted vision into the true meanings of the circumstances of life. Much of what a mortal would call good luck might really be bad luck; the smile of fortune that bestows unearned leisure and undeserved wealth may be the greatest of human afflictions; the apparent cruelty of a perverse fate that heaps tribulation upon some suffering mortal may in reality be the tempering fire that is transmuting the soft iron of immature personality into the tempered steel of real character.”  The Urantia Book (1305.4) (118:10.9) 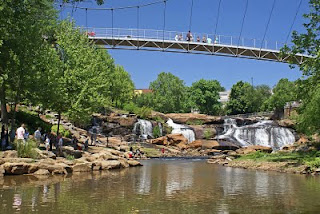 In the last blog I mentioned that I would go to Greenville SC to explore; after posting it I received an email from Pamela of the Lakeland FL group saying she grew up in that part of the country.  The truly amazing thing about Greenville is that right in the center of the city is a beautiful park, Falls Park on the Reedy River.  Words and pictures cannot do justice to this lovely park in the center of a vibrant city.  It is based on two levels; the upper level has green lawns and a unique curved pedestrian bridge while on the lower level are rocks and the falls.  I was there on a sunny Saturday afternoon and it was a joy to see it being used by families with children, people with their dogs, wedding parties taking photographs, young girls rolling down the grassy banks, boys climbing rocks and teenagers wading across the river.  It was a pleasure to be there and observe the people enjoying this beautiful space.
The reason I go to that part of South Carolina is that Lamar grew up in Laurens and I stop by to visit with his cousin and aunt.  I also pause in remembrance at his marker.  While waiting for his relatives to arrive I took pictures of the quaint town square in Laurens (I think I have enough photos for this posting).  It is a neat, well-tended typical southern town square that has been left behind by larger stores on the outskirts of town, even the stately courthouse is no longer used as such.  And just around the corner is a self-proclaimed Redneck Museum. 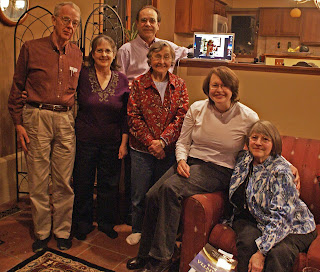 From South Carolina I went north, stopping at Wytheville VA one night and then going on to Columbus Ohio.  The reason for stopping there was to visit Scott’s study group who happened to meet the night I arrived.  At Scott’s suggestion I had dinner at a Chinese restaurant, Ming Flower, and was well pleased with the meal.  The driveway to his house is narrow, long and lined with trees as his house is well off the road.  It turns out that Scott and his brother also attended Allegheny College; I feel that I met his brother there (long story).
This meeting was in memory of a vital member of their group, Daryl, who has recently been diagnosed with a serious form of cancer.  It was an inspiring meeting where we prayed for him and read passages in the Urantia Book dealing with healing and faith.  Even though I did not know Daryl, I felt privileged to attend.  Susie could not get there so she participated by Skype; her image is on the computer screen above.  There was more discussion than many groups have and I was told that they used to just read; sharing views is an important aspect of a dynamic study group. 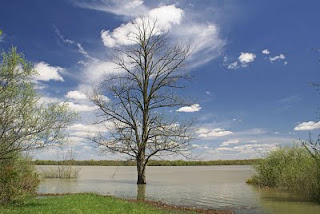 I did not stay long in Columbus, but I did take time to explore Alum Creek State Park.  I had planned to stay in that park, but when I saw the sites I felt I would have problems getting into the spaces and they did not even have water hookups.  Fortunately there was an excellent place just down the road.  Near the park offices there are many trails where I explored the woods.  It was a fine early spring day to walk and explore.  As the photograph shows the water was slightly high.  The dogwoods were in blossom and the trees were just starting to put out leaves.  One snake paused on the path in front of me just long enough for me to take his photograph, but I feel that the above tree is much more picturesque. 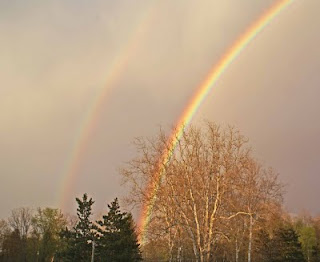 Before I started north my brother asked me to bring the sun with me, well I did!  The above rainbow was observed not long after I arrived and we had a full week of sunshine; unfortunately that week is now over and they are forecasting a week of cold rain.  Oh well, that gives me time to get this blog out.
“You are destined to live a narrow and mean life if you learn to love only those who love you. Human love may indeed be reciprocal, but divine love is outgoing in all its satisfaction-seeking. The less of love in any creature’s nature, the greater the love need, and the more does divine love seek to satisfy such need.”  The Urantia Book (1739.6) (156:5.11)

#22:  First a bit of housekeeping:  I recently moved this mailing list into Outlook and noticed that for many email addresses I do not have a name or contact information.  If you wish, I would appreciate it if you would send me such information, as sometimes it is difficult to correlate a name with the email address.  If anybody is interested in this blog, please send me your email address so you can be notified of future postings.  Also, if you have any topics you would like discussed here, please let me know.

I have just moved from Ladson to Joanna, South Carolina, which is about fifty miles southeast of Greeneville, South Carolina.  I plan to visit friends in Laurens and possibly explore Greeneville, as I understand it has been revitalized and is an interesting city.  Next I will head northward, but instead of going directly to my summertime parking space in southwestern New York State I will stop in Columbus, Ohio to meet with a study group there.  I hope I am not going northward too early, my brother has been in the New York State campground for a couple of weeks and he says it has rained nearly every day and the temperature barely gets over 60 degrees.  But before going into all that I had better account for the five weeks spent in Coastal South Carolina. 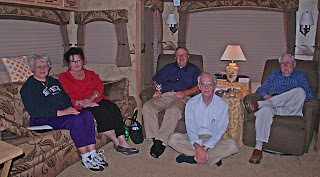 “Men all too often forget that God is the greatest experience in human existence. Other experiences are limited in their nature and content, but the experience of God has no limits save those of the creature’s comprehension capacity, and this very experience is in itself capacity enlarging. When men search for God, they are searching for everything. When they find God, they have found everything.”  The Urantia Book (1289.2) (117:6.9)
While I was parked in Ladson our group met nearly every Sunday evening.  We read Paper 130 “On the Way to Rome” and started the following paper on “The World’s Religions.”  The first of these is one of my favorites as it has much inspiring teaching as well as describing the way Jesus interacted with those around him.  Our group goes out to dinner before our meeting, once we went to a nearby seafood restaurant.  While we were waiting for our table we started talking with another customer who is a third generation Chinese American and was in town (Charleston, Fort Sumter, etc.) from the west coast for the Civil War anniversary events.  He appeared interested as we talked about the Urantia Book, hopefully he will seek more information about it.
Most of the time I was parked in Ladson I did little exploring, but I took one day to visit the “Ernest F. Hollings ACE Basin National Wildlife Refuge.”  This is the third NWR I have visited on my northward journey this year. 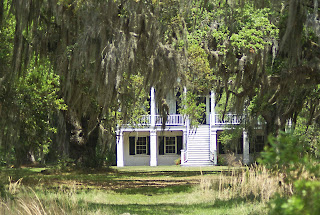 The offices for the NWR are located in a plantation house that was built in 1828 and is only one of three antebellum mansions in the area that survived the Civil War.  I did take photographs of the front but I thought the above view looked more mysterious.  I got a kick out of the old slave cabin, it appears they treated their slaves well; there is even a satellite dish right next to it! 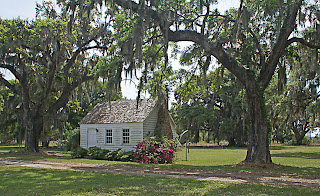 The walk through the NWR was most enjoyable, I saw only a few birds but the air was filled with the sound of singing birds; at times it sounded as if I were deep in the jungle.  At one point the trail went along the top of a levee between old rice fields, when the trail ended at the river the levee continued along the river but the trail was not maintained any farther, making it truly a ‘road less traveled.’  The top of the levee was covered with dry cracked dirt and a few old dried weeds; there was no trace of previous travellers whatsoever.  Feeling somewhat adventurous I continued along the cracked levee.  There were ducks in the river, Fiddler Crabs in the tidal mud and alligators in the ditches along the old rice fields.  I had visions of stumbling over a root or tripping on a deep crack in the hard surface of the levee, then sliding downward into the waiting jaws of those alligators.  Cheery thought.
On my way out I found this lily and couldn’t resist it. 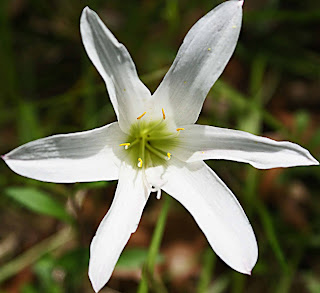 "Let not the discussions of the humanity or the divinity of the Christ obscure the saving truth that Jesus of Nazareth was a religious man who, by faith, achieved the knowing and the doing of the will of God; he was the most truly religious man who has ever lived on Urantia."  The Urantia Book (2090.2) (196:1.1)