I have safely returned to southwestern New York State from an uplifting Urantia Association conference in Leavenworth, KS.  The conference was hosted by the Kansas local association and was well attended; also there were a number of young people, which was most encouraging.  I did give my presentation and well, details of that are given below.  Not long after returning from Kansas I drove to Waverly, New York to attend a study group meeting at the home of Ralph and Betty Zehr.  The format they use should be effective in transforming a “reading group” into a true study group.

The theme for the quotations in this posting is fellowship, which is after all one of the main aspects of a conference such as this.

“The characteristic difference between a social occasion and a religious gathering is that in contrast with the secular the religious is pervaded by the atmosphere of communion. In this way human association generates a feeling of fellowship with the divine, and this is the beginning of group worship.” The Urantia Book (1133.1) (103:4.1) 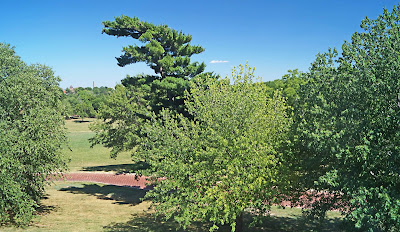 The national conference of the Urantia Association of the United Sates was held at the University of Saint Mary in Leavenworth, KS, which has a beautiful campus.  At the last moment I requested a private room instead of the shared room I had signed up for.  It took a couple of days to realize that I also had a private bathroom.  Generally there are two in each room and two rooms share a bathroom.  The room was Spartan and the floor was very hard when I did my morning exercises but the view could not be beat; the above photo was taken from my window on the third floor.

The theme of the conference was “Relationships: Human and Divine.”  There were about 90 people attending plus a few children; it was heartening to see the little children and the young adults, frequently at conferences such as this a majority of attendees are grey heads like me.  There were also two attendees from Montreal, Canada.

The conference began Thursday evening with a dinner followed by the opening program and a social gathering.  Chris Wood, who was recently elected President of UA International, introduced the programs.  Both Friday and Saturday morning there was a plenary session followed by study group meetings; everyone was assigned to a group at registration and after lunch each group reported their findings to the assembled people.  Friday we studied Paper 110 “Relation of the Adjuster to the Individual Mortals” and Saturday it was Paper 99 “The Social Problems of Religion.”  Sunday morning we explored “Family Relationships.” 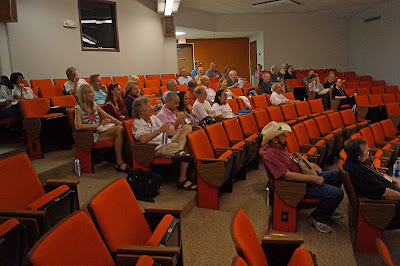 Friday and Saturday afternoon various workshops were presented.  Among those presenting the first afternoon were Marta Elders, Jeff Wattles, David Kulieke, Gard Jameson and Ken Kaiser.  I attended one by Nick Stefaro and Barb Newsom, “Michael’s Plan;” Chris Wood and Charles Oliver assisted them.  This was an interesting presentation of the dedication and the acrimony associated with this honest attempt to develop and share “Michael’s Plan,” which was directed at more closely following the guidance of the Revelators who gave us The Urantia Book.  The documents associated with this project are now available on the UAI website.

My presentation, “The Urantia Book and Perfection Hunger,” was given in the auditorium shown above; I was hoping for a smaller space but this room was the only one with a projector, which I needed to show the quotations used as well as photographs that reinforced the feelings being discussed.  Unfortunately the pictures did not show up well on the screen, but then there were only five in the audience.  I guess they appreciated it but I found the experience somewhat underwhelming for my first presentation at such a conference.  Later I had an opportunity to talk with Charles Oliver, who gave a moving presentation at the final plenary on Sunday morning; he once gave a presentation where there were only two in the audience and three people presenting. 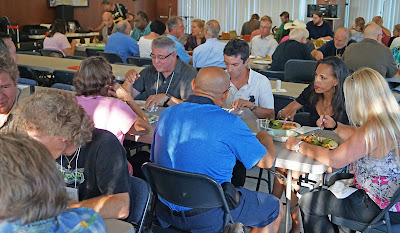 The meals were all prepared by the host group and volunteers; the food was ample and satisfying; the barbeque Sunday noon was a scrumptious feast.  It was interesting to sit with various individuals and discuss the revelation, truly a communion.

The highlight of the conference was the entertainment Saturday evening held in the Mead Walnut Room, which had a Steinway piano on a raised stage.  David Glass recited two poems, “Unity” and “A Better World.”  The second poem ended “…and we are blessed / To know that even as our world is quaking, / It is a better world that you are making.”  Lee Armstrong acted out a short story, presenting it in voice as the various characters, a dramatic rendering that was well done indeed.  Next was the first public showing of a painting that was commissioned by Lee and his daughter Ozanne that depicted his late wife Roselyn Armstrong, this portrait was done by Tonia Baney.  I never met Roselyn, but the portrait shows her holding a Urantia Book and standing against a background of galaxies, she appears ready to step forth into them.  The evening was culminated by Bob Solone at the piano in a memorable performance that began with an intricate piece that had various themes from the movie “The Graduate” delicately woven into the music; at the end of the piece “El Condor Pasa” was also woven into the music—fitting tribute to a “graduate.”  It was a joy to witness the extraordinary talent displayed this evening.

The greatest benefit from such a conference is the interactions, the casual meetings and discussions that take place throughout the conference, as the above quote states “a feeling of fellowship with the divine….” 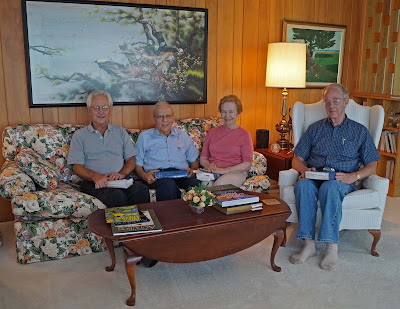 A few days after returning from Kansas I drove to Waverly, NY (about a three hour drive) to attend a study group meeting at the lovely home of Ralph and Betty Zehr.  I was impressed by the manner in which this meeting was conducted.  We were instructed to read Paper 189 “The Resurrection” before the meeting and each participant was assigned a section to discuss at the meeting; the first section “The Morontia Transit” was assigned to me.  The paper was not read during the meeting, except for isolated passages, but was instead discussed.  This makes it a true study group, not the usual reading group; it is a good format for other groups to investigate.

“No matter what upheavals may attend the social and economic growth of civilization, religion is genuine and worth while if it fosters in the individual an experience in which the sovereignty of truth, beauty, and goodness prevails, for such is the true spiritual concept of supreme reality. And through love and worship this becomes meaningful as fellowship with man and sonship with God.” The Urantia Book (1089.12) (99:4.4)

All photographs used in blog postings were taken by the Wandering Urantian, Doug Cable.