We returned safely from our tour of Ireland with the South Carolina Public TV Endowment group and our subsequent journey into Great Britain.  There were a few “issues” along the way but overall it was a fantastic excursion.  This posting will cover the first half of the Ireland tour including Dublin, the National Botanic Gardens of Ireland, an estate named Powerscourt, the English Market in Cork, Millstreet County Park with red deer and a ride in a jaunting car pulled by a stout pony named Mickey Mouse, all topped off by a boat ride through the lakes at the Gap of Dunloe.  The rest of the tour will be described in the next installment.  Even though it was a fantastic journey it took a while for me to recover from it, that is why this posting has been somewhat delayed.

There were no Urantia contacts during the Ireland tour, but later we did attend a study group meeting in Reading, England.  Since this posting is about traveling to foreign lands and meeting other peoples, the quotations deal with brotherhood.


Economic interdependence and social fraternity will ultimately conduce to brotherhood. Man is naturally a dreamer, but science is sobering him so that religion can presently activate him with far less danger of precipitating fanatical reactions. Economic necessities tie man up with reality, and personal religious experience brings this same man face to face with the eternal realities of an ever-expanding and progressing cosmic citizenship.  Urantia Book (1093.3)

We (Betty Lou and I) arrived in Dublin a day early to give us a day to acclimate ourselves to the change in time zone before the rest of the group arrived and the formal tour began.  A few others also arrived a day early so we took a walking tour of Dublin.  Before going to the old part of town we had lunch in a diner that looked as if it was straight out of the 70’s.  After lunch we walked along the River Laffey toward the old part of town.  Our informal tour included Christ Cathedral, established about 1030 by the Norse King Sitriuc Silkenbeard.  They were about to have services so we could not go into the cathedral.  We also walked to St. Patrick’s Cathedral, which was established in 1192 and which also was not open.  There was a fine grassy park around the later cathedral and families were enjoying the sunny day with their children and dogs.  In fact we had very little rain during our visit overseas; we were prepared for rain but the weather was mostly delightful.  Our leisurely stroll this first day was a peaceful interlude before the tightly scheduled tour.

The window of our hotel room looked out over Dublin and one of the most interesting sights we enjoyed there was to watch a family of Common Gulls on a nearby rooftop.  One adult was always on guard watching the chicks.  There are three small chicks, in this photo one is partly hidden by the adult in the foreground.  The first thing we did each morning and the last thing in the evening was to see what was happening to this family. 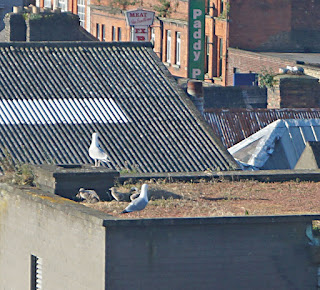 The next day the formal tour began and in addition to the 50 or so in the tour, we had a naturalist, Patrick McMillan who does the PBS show “Expeditions,” as well as a local tour director, Patrick Riordan, who made things interesting with a steady stream of descriptions of the countryside we were traveling through and its colorful history.

It was difficult to select only a few photos to include in this blog, so several stops do not have photos in the postings.

The next stop was at the National Botanic Gardens of Ireland where it was delightful to stroll the grounds and greenhouses listening to Patrick the naturalist telling us about all the interesting plants.  Among the photos I obtained there was one of a black iris, not a common sight. 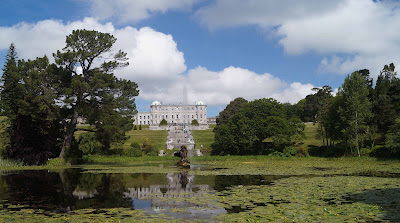 The house at Powerscourt was rebuilt in the 1730’s and at the same time the gardens were extensively rebuilt.  The mansion and grounds was overseen by a series of Viscount Powerscourt.  It was an impressive sight but we could not help but think of the large number of workers that were necessary to keep the extensive gardens and manicured lawns pretty for a few noblemen.  Nevertheless the visit to the grounds was enjoyable.

We also went to the Irish National Stud Farm and Gardens.  The mares were out in the pasture while the studs had comfy lodgings in a barn.  Again the gardens were lovely, while there I obtained a photo of a swan sitting on her nest.  From there we drove through the Wicklow Mountains National Park to our hotel, which was in Colonmel.  All the hotels on the tour were fine places to stay.  The only difficulty was the tight schedule we were under, frequently we would arrive late in the afternoon and need to be on the bus by 9 AM the next morning.

The next day we were taken to Cork City where we had a chance to explore the English Market.  This indoor market has been in operation since 1788 and was a delightful place.  The food, most of which was organic, was attractively presented and everything was clean.  We naturally did some shopping, buying dates, cherries, olives and white dulse seaweed. 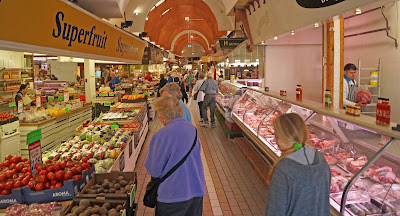 Near Cork City is the Blarney Castle.  Some in our group stood in long lines so they could climb up narrow stars in dim light, lean backwards in an uncomfortable position and kiss some rock (the Blarney Stone) that hundreds of tourists have previously kissed.  Not for us.  Instead we explored the grounds and took a tour through the Manor House which was completed in 1874 and is still inhabited by the current owners.  One interesting sight on the grounds was a large Redwood tree that had two strange curvy trunks; we were informed that the tree was only 75 years old.  There was also a poison garden with many poisonous plants that also included many we do not think of as being poisonous such as rhubarb.

Another interesting stop was at Millstreet Country Park where we had a local guide in addition to our own naturalist.  Among the interesting sights were Red Deer, what we call Elk.  One pasture held the does but they were too far away to photograph well.  The stags on the other hand were in another pasture near the path and taking it easy. 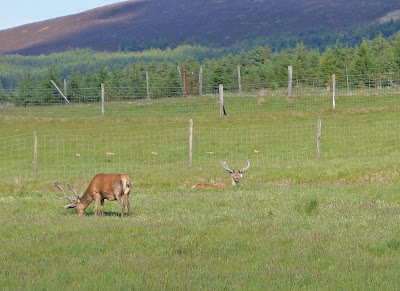 Our next hotel was in Killarney, which is a lovely little town that we fell in love with.  It had an air of happiness and comradery; it did not have the feel of a tourist town, which in fact it is.  We stayed in Killarney two nights.

Our first morning in Killarney we rode along the Gap of Dunloe; looking down on the three lakes that separate two highlands.   Our adventure this day was riding in a small cart, called a jaunting cart, pulled by Mickey Mouse, our stout pony.  The ride took a few hours; at one place the incline was too much for our pony so we got out and walked.  Our pony is in the background in the photo, but it does give an idea of what the cart looked like.  Each cart had four passengers plus the driver, who occasionally walked. 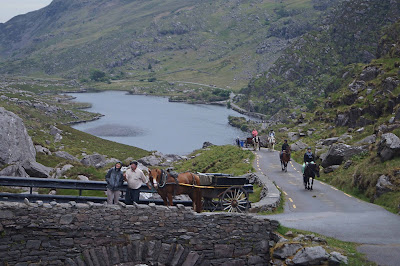 Jaunting Carts in Gap of Dunloe

After lunch at the far end of the lakes, we went by boat to Ross Castle at the end of the three lakes, a journey of a few more hours.  These boats were fairly small with about six or eight passengers each.  Along the way we saw mountain goats and the scenery was impressive.  One small island had a lovely cottage that would be an excellent place to get away from it all.  There was a considerable amount of Rhododendron along the shore and it is pretty but it is an invasive species here, spreading across the land.

The second installment of our Ireland excursion will be coming soon.  I also have exciting news but this blog is long overdue, so that will wait until another posting, hopefully much sooner than this was.

Pentecost endowed mortal man with the power to forgive personal injuries, to keep sweet in the midst of the gravest injustice, to remain unmoved in the face of appalling danger, and to challenge the evils of hate and anger by the fearless acts of love and forbearance. Urantia has passed through the ravages of great and destructive wars in its history. All participants in these terrible struggles met with defeat. There was but one victor; there was only one who came out of these embittered struggles with an enhanced reputation — that was Jesus of Nazareth and his gospel of overcoming evil with good. The secret of a better civilization is bound up in the Master’s teachings of the brotherhood of man, the good will of love and mutual trust.  Urantia Book (2064.4)