#32 :  Our Urantian Odyssey is on the road!  Betty Lou Wallace, president of the Florida local of the Urantia Association, has graciously consented to accompany me as I travel from Dade City Florida to Jacksonville by way of Louisiana and Texas.  I picked her up at the Amtrak station in Orlando, and brought her to Dade City, which is northeast of Tampa.  A couple of days later we headed out in the Wyoming, my house on wheels, toward the first stop at Defuniak Springs in the Florida Panhandle.  While there we met with a dynamic study group in Panama City that would make an excellent model for other groups and with friend John at the Glendale Memorial Nature Preserve.  Next we moved to Livingston Louisiana, which is east of Baton Rouge.  While there we met a free spirit in southern Mississippi and joined an invigorating gathering of Urantia Book students in Baton Rogue.  There is so much going on that it may be difficult to squeeze in everything!

“Love of adventure, curiosity, and dread of monotony — these traits inherent in evolving human nature — were not put there just to aggravate and annoy you during your short sojourn on earth, but rather to suggest to you that death is only the beginning of an endless career of adventure, an everlasting life of anticipation, an eternal voyage of discovery.”  The Urantia Book (159.6) (14:5.10) 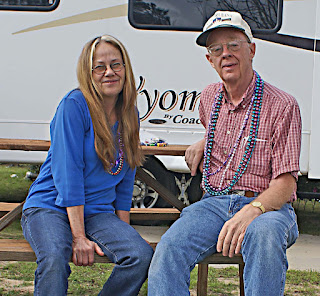 I drove to Orlando to pick up Betty Lou at the Amtrak station.  The parking lot was full and double parked as people were waiting for the arrival of two trains; it was a struggle to squeeze in the Monster (Ford F350 dually).  I am pleased that she has consented to join my westward swing meeting Urantian students; it is a joy to have her along, as she is a real buddy and companion to this gay guy.  On the way to Dade City we stopped at Panera Bread for lunch.  While eating we were unwilling spectators of a life and death struggle between two lizards (black with two rows of white dots along each side) fighting behind the shrubs outside the windows next to our table. 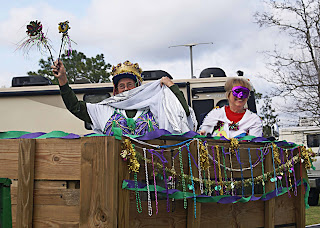 After we were parked in the campground in Defuniak Springs in the Florida Panhandle we noticed people setting up chairs along the streets; soon there was a Mardi Gras “parade” with decorated golf carts and wagons, a guy in drag, and ladies in fancy costumes throwing out beads, miniature Moon Pies and candy.  Turns out that was Fat Tuesday.  What fun! 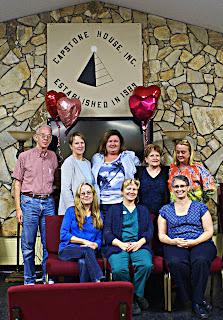 That afternoon we drove to Panama City.  The study group met at Capstone House, a futuristic learning center that has studies in everything from Ecology, to Cosmology, Parapsychology, and the Urantia Book.  Meda Arbour delicately directed the discussion of the study group.  Most study groups have a specific goal such as “We will read all of Paper X no matter what happens!”  This study group read Paper 37, “Personalities of the Local Universe,” but only Section 9, “Permanent Citizens of the Local Universe.”  After each paragraph she paused and explained each unfamiliar concept since most members had only been exposed to The Urantia Book after learning about her study group that started last fall.  As she explained, hers is a study group, not a reading group.  Meda also explained that the group started reading at part 2, The Local Universe; this was based on her understanding of the attendees, some of whom had unfortunate experiences with organized Christian religions but were open to the enlarged concepts of The Urantia Book.  It was a joy to answer the honest seeking questions of the members.


This suggests a promising way to find candidates for the study of these teachings: locate a center that studies esoteric subjects, places where Seekers gather and start a study group there, introducing such open minded individuals to the epochal revelation.
There were two small meetings, one before we left Florida and the other after our arrival in Louisiana.  We met Urantia Book reader and friend John and his buddy Carl at a country restaurant and then we went to the Wyoming for an evening of interesting conversation.  Carl even gave me a bag of kumquats, bite sized bits of sunshine.  In Louisiana we drove to Mandeville to meet with a study group at Vianne’s Tea Shop.  In two stops there I have not been able to get a decent picture, perhaps next time. 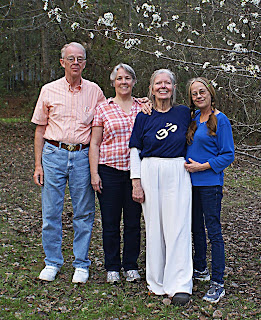 Wandering Urantian, Virginia, Annette, Betty Lou
Before I run out of space there are two more stops to cover quickly.  The first was in Osyka MS to meet Annette.  Virginia drove us to just inside the MS state line where a sign beside the driveway proclaimed “Ashram Old Path.”  Annette is a delightful soul who is certainly in touch with “Pappa” (our Heavenly Father).  The pages of her copy of The Urantia Book are covered with tabs and notes to related passages.  The photograph hints at the way she positively glows. 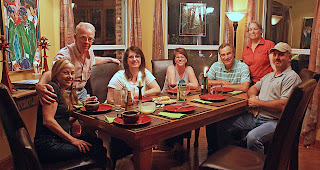 We drove to Baton Rogue to the lovely home of Virginia and Charles for a gathering of Urantia Book students.  We got there early enough to enjoy the grounds that Charles has landscaped so that they appear to be totally natural woods, in a subdivision no less.  Soon Brian and Cheri arrived, between dinner and conversation, it was about five hours before we left.  The spiritually uplifting discussion included the topic “How has The Urantia Book changed your life?”  It is truly invigorating to be part of these gatherings.
Since we are now in Texas, I guess there will be another blog soon to get caught up.  This has been a totally joyous experience; this morning two Blue Birds, a male and a female, were pecking at our windows as if they wanted in to have a chat, or possibly be inside before last night’s storm that really rocked my house on wheels.
“It is not so much what you learn in this first life; it is the experience of living this life that is important. Even the work of this world, paramount though it is, is not nearly so important as the way in which you do this work.”  The Urantia Book (435.6) (39:4.13)
Posted by Doug at 7:44 AM No comments: