My book “Light of Truth” is finished except perhaps for a final editing; next comes the business of getting it out to our sisters and brothers in need of a spiritual uplift.  While the book has been our main focus for quite a while, we have done a bit of exploring.  We visited a waterfall that is only about three or four miles from our home.  There is one even closer, but we have not yet made it there.  We spent some time at the church camp where Betty Lou lived as a teenager. And yes, we have snow pictures.  It is amazing how a coating of snow makes things look so much better, as long as you have no pressing engagements down the mountain someplace.  We also have an excerpt from chapter two of “Light of Truth.”

Later this month I will have booklets available consisting of quotations from the book.  I will let you know when are ready to send out.

We depart somewhat from our usual procedure and start with a quotation from “Light of Truth.”  The distinction between true and false liberty is vital to our gaining a full understanding of the various implications of our revelation.  There is a wider discussion of this topic in my book.

‘True liberty acknowledges everyone has value, that everyone has a spark of God within.  This presence of our Heavenly Father within each normal minded individual has astounding implications;  this means that each one of us has a chance for eternal life, to go to Paradise and meet our Father in person.  It also means that if anybody is degraded for any superficial characteristic then it is God Himself who is being degraded.  If any individual loses freedom because of any sort of bigotry then God is the subject of such unfair treatment.  How can we subject the creator of all things and beings to such unfair treatment, to bigotry?’ 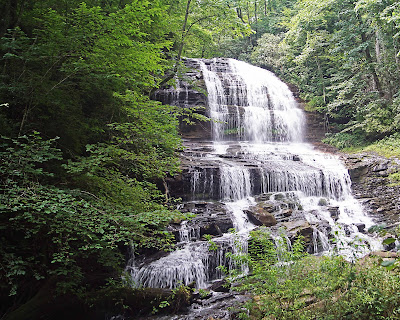 {Pearson falls, less than three miles from our house, but it took us nearly two years to visit it.}
We have been so busy that we have not explored our immediate surroundings very much, there always seems to be something else to do.  Late last summer we did take time out for some exploring and visited these falls, which is a lovely place to spend time.  I remember I had a particularly nasty case of poison ivy then, but what else is new?  Pacolet falls are even closer but we have not been there yet.  They are on private property but just over the ridge from our lodge in Poplar Cove.


Last fall Betty Lou and I went to central Tennessee where she grew up.  We stayed about a week at the church camp where her dad was the camp manager.  Bethany Hills covers 265 acres and the valley is fed by four springs.  Naturally things have changed since she lived there, but the place still has the charm that only a quiet place in the wilderness can have.  The buildings had shown wear over the years, but one can feel the spiritual vitality of this place.  One can imagine decades of exuberant youngsters swarming throughout the woods exploring and learning lessons to last a lifetime. 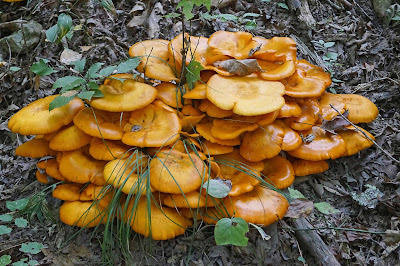 We went up one of the trails until it was lost in the changes of time.  Along the way there was a circle of these clumps of mushrooms that were quite distinctive.  The small outdoor chapel by the lake was still there, as well as the activities building where she would sneak to shoot hoops.  We helped clean the hall for a wedding scheduled to take place just after we left.  We also drove a couple hours west to the town where she lived as a young girl; we also attended the church they attended at that time.  A couple of weeks ago we returned to Bethany Hills for a ceremony in honor of the current camp manager who had just retired; this is a special part of a special region of our country.

As long as we have no reason to go down the mountain, snow can be a beautiful experience.  When there is a forecast of snow we stock up a couple days ahead so we can sit back and enjoy the view.  The snow on the feeder shown below gives an idea of how deep the snow got; we measured 11 inches of snow on the veranda table.  It was fun to walk the trails with the camera and to fully appreciate the beauty of this space.

We have a small network of trails through our woods.  The inner network is nearly complete; I just need to spread wood chips on part of them.  The current trail goes to a small spring.  We also plan a longer trail around the back of the property.  There is always something to do here. 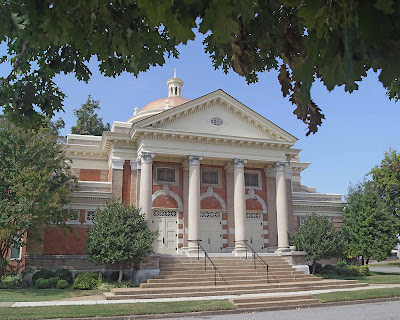 {First Christian Church (Disciples of Christ), Union City, Tennessee}
{Following is an excerpt from Chapter 2, Second Bringer of Light: Adam and Eve in “Light of Truth”.}

[1] Urantia Book, one column edition, page .paragraph; 821.1, all references are to The Urantia Book unless otherwise noted. 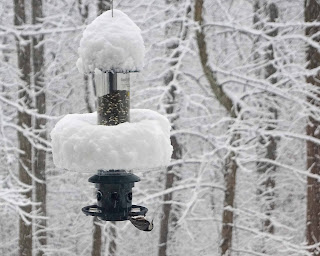 {Snow on the bird feeder with upside down nuthatch}
However our planet is not normal.  Our planetary prince had betrayed the trust placed in him and was openly working against them, which created problems for our Adam and Eve.  They were cut off from the system lines of communication and were opposed at every turn by Caligastia {our planetary prince until he joined a rebellion against universe authority} and his followers.  Their task on our planet was exceedingly difficult.

The Garden of Eden had been prepared for them by Van who was a loyal member of Caligastia’s staff and who had remained on Urantia until the time of Adam and Eve.  The Garden was well laid out and prepared for their arrival which took place more than 37,800 years ago.  Just for fun, let’s compare the Garden in its day with our state of Maine today.

The Garden had space and facilities for a population of one million.[1]  Our state of Maine today has a population of 1.3 million[2].  The Garden had more than twelve thousand miles of paved paths and roads[3] while Maine today has 22,830 miles of roads[4].  Imagine what archaeologists would say if they found an area roughly the size of Maine (30,800 square miles) that nearly forty thousand years ago had half as many miles of paved roads and paths that Maine has highways today.  One final thought on this subject, there is ample area in the eastern Mediterranean Sea for a peninsula the size of Maine.  Perhaps there are remnants of the Garden there.

Adam and Eve struggled mightily to bring civilization to Urantia but there was very little to build these advanced teachings upon.  The major problem was the establishment of law and order in a world of savages, barbarians, and semi-civilized human beings. Aside from the cream of the earth’s population, assembled in the Garden, only a few groups, here and there, were at all ready for the reception of the Adamic culture.[1]  Even some of those dwelling in the garden believed in Caligastia’s teaching of unbridled personal liberty[2] and this sophistry continues down to our very own times.
Caligastia offered crafty and effective opposition to the Adamic mission; … this archrebel, by a wily stratagem, outmaneuvered the Edenic pair and entrapped them into a violation of the covenant of their trusteeship as the visible rulers of your world. The traitorous Planetary Prince did succeed in compromising your Adam and Eve, but he failed in his effort to involve them in the Lucifer rebellion.[3]
[1] 833.4
[2] 833.6
[3] 583.3 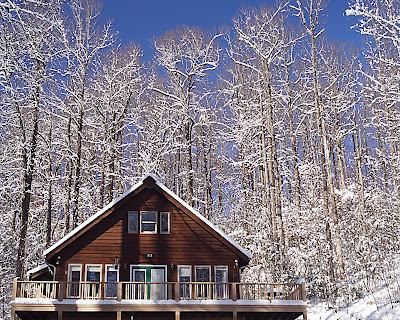 {Our magical lodge in the Smokies}

Adam had set up the Garden so that it was functioning reasonably well, but when he went outside the Garden he met with resistance that was instigated by Caligastia.[1]  This constant struggle kept Adam fully occupied.  While Adam was thus busy with affairs of the garden, Eve would meet with Serapatatia {a leader of the neighboring tribes}; these private meetings gradually increased in nature and the confidentiality of the subjects discussed.  This entire process proceeded so gradually that Eve was caught off guard.[2]  Over history how many times has someone taken a series of innocent little steps and at the end of this process become the antithesis of who he or she really desired to become?

Serapatatia worked diligently for the affairs of the Garden, even becoming the associate chairman of the Edenic commission on tribal relations.[3]  He also had many meetings with Adam and Eve discussing ways to improve their methods; during one of these talks, which more frequently involved only Eve, Serapatatia got the idea of doing something to immediately help the needy tribes without waiting for large numbers of the violet race to be ready.[4]  He wanted to make a shortcut in the plans, to seek the easy way out and mix the violet race with the evolutionary races before they were ready.  He fully supported the long-term goal but he was impatient and wanted to see something in his lifetime.[5]  Again the process was quite gradual; these plans were secretly discussed for five years before Eve agreed to meet Cano who was a handsome and sincere spiritual leader of the friendly neighboring Nodites.[6]

Without laboring the point any further, the deed was done.

The shadow of a hair’s turning, premeditated for an untrue purpose, the slightest twisting or perversion of that which is principle — these constitute falseness[7].