# 67 Parliament of the World's Religions


This posting is mainly concerned with thoughts about our recent trip to the Parliament of the World’s Religions held last fall in Salt Lake City, Utah.  We will examine interesting parallels between this meeting and a journey Jesus took before he embarked on his public teaching tours with the apostles.  The Salt Lake City gathering was thrilling and satisfying on many levels; each of us experienced encounters with people of different cultures.  Next there is a short commentary on an unusual tree that was along a trail in the woods not far from here and finally we have one more photo of our house, which is now looking like a home.

The theme of the first quotation is “human unity and mortal brotherhood,” while the theme for the second is well, see below.
Human unity and mortal brotherhood can be achieved only by and through the superendowment of the religion of the spirit. Racial minds may differ, but all mankind is indwelt by the same divine and eternal spirit. The hope of human brotherhood can only be realized when, and as, the divergent mind religions of authority become impregnated with, and overshadowed by, the unifying and ennobling religion of the spirit — the religion of personal spiritual experience.  The Urantia Book (1732.1)

Based upon our experiences in Salt Lake City there is hope that this process has begun, that these religions of authority are beginning the transformation toward the religion of the spirit. We pray that such changes continue. 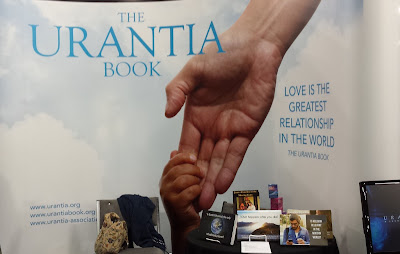 Urantia Book Booth at Parliament of the World’s Religions

One thousand nine hundred ninety years ago Jesus stopped at a place called Lake Urmia and gave a series of lectures at an amphitheater dedicated to the spirit of religion (1485.3). The title of these lectures was “The Kingdom of God” and the “Kingdoms of Man.”  Recently we attended the Parliament of the World’s Religions in Salt Lake City and this gathering had goals similar to the one Jesus attended.  While there are significant differences between these events, it is interesting to compare them in an effort to ascertain how our own religious experiences could be enhanced: both our personal experiences and our interactions with sisters and brothers of different faiths.


Lake Urmia is located in what is now northwest Iran, east of the Caspian Sea and it is a salt lake similar to the one in Utah not far from the conference center where the recent Parliament was held; interestingly both lakes now have a city nearby with the same name as the lake.

The guiding principle behind the center at Lake Urmia was different religions interacting and sharing their viewpoints in a peaceful manner.  In our times the Parliament website declares: “The Parliament of the World's Religions was created to cultivate harmony among the world's religious and spiritual communities and foster their engagement with the world and its guiding institutions in order to achieve a just, peaceful and sustainable world.”  The only requirements for religions to participate at Lake Urmia were that they must believe in a God and that they interact peacefully.  The Parliament was somewhat more open minded, even atheists had a booth there.   Some numbers from the Parliament are: 9,806 participants, 73 countries represented, 30 major religions, 548 sub-traditions, 1800 presenters and more than 1000 programs.

When we looked at the photos of the opening ceremony different cultures were sitting apart from each other with little interactions, but this photo of the closing event shows cross cultural interactions.  It is these personal interactions, which were a result of the Parliament, that make such gatherings significant.


It would be impossible to attempt any depiction of the one thousand programs or the countless casual interactions during this powerful gathering.  First however, there was an interesting interaction before the proceedings began.  When we arrived at the airport we called our hotel and were told that their shuttle had just left, that we should take a taxi to the hotel and they would pay the driver.  When we were underway the taxi driver asked why we were there.  We replied that we were attending the Parliament of the World’s religions.  He said in a derogatory manner that he heard even Muslims were attending it.  (In fact a highly placed Muslim leader would speak at the gathering.)  We replied that the purpose of the gathering was to meet and interact with people of all faiths, that we are all sisters and brothers.  It turned out that he was Muslim and was testing us.  He asked what religion we followed and we said that we believe religion should be a personal experience between the individual and God.  He paused to think about that and then went into a long monolog about his faith.  Actually he was so involved in his thoughts that he missed the turn to the hotel, it took him a moment to reorient himself and find the hotel.  Perhaps we gave him something to think about.

At the Parliament there were hundreds of booths sponsored by various religious groups where we could interact with individuals of vastly different backgrounds and learn about their beliefs.  When we were not manning the Urantia Book booth we wandered through the displays.  People of the Sikh faith believe they should feed those in need, therefore every day at noon they fed thousands of those in attendance.  First they had us remove our shoes, cover our heads and sit on the floor.  The food was excellent; we later heard that the day we ate there the food was the spiciest of all and while I could not begin to describe the food, we certainly enjoyed it.  I have photos of the line on the first day, it appeared endless.  We noted the security guards on the way into the convention building, they appeared to have nothing to do and this is what the gathering was all about.  This is what our planet needs more of, people of different cultures interacting with and seeking to understand those who are different, those who have a different belief system.


Returning to Urmia, the efforts toward religious harmony there proceeded uninterruptedly for several years until after the death of the founder of this facility when his oldest son asked one of the Christian leaders to send someone to be on the faculty.  It is unfortunate that those who were sent to Urmia were inflexible and unyielding in their interactions with the other religions and as a result this center of religious harmony closed five years after their arrival.  The failure of the Urmia meetings emphasizes the importance of being flexible in our dealings with those of different cultures and religions.  Cultural interactions broaden our outlook in ways that are vital to our spiritual growth; real advancement in spiritual awareness cannot be obtained in isolation.


At our meeting in Salt Lake City we observed harmony and a sincere attitude to understand other religions and cultures.  Meetings such as this must continue and grow so that feelings of brotherhood may increase.  It is upon this spirit of intercommunication and working together that the spiritual progress of our planet depends.

On a personal level these interactions with different faiths are satisfying and uplifting.  Again, we cannot make personal spiritual growth in isolation.   We need these exchanges of belief and shared comradery that are the natural outcome of such gatherings.

The Parliament has been held infrequently, one every four years or more, but this year they announced they will hold them more frequently.  For more information about the Salt Lake City gathering and the other work the Parliament is carrying out check out their website at: Parliament of the World's Religions.  They are truly doing great work. 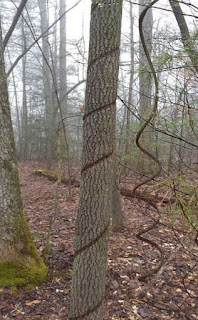 I was doing a power walk on a trail not far from our house when I spotted this interesting tree.  It has a corkscrew scar where a vine was wrapped tightly around it but the vine is now hanging loose, severed at the bottom.  This tree grew and withstood the squeezing vine long enough to leave a deep scar, however eventually the tree won when the vine lost its connection with the ground.  Zooming in reveals that the bark within the scar is intact and the bottom of the vine shows a rough end so it was not cut.  The intact bark indicates that the tree was not seriously harmed.  Whether someone helped to liberate the tree or the tree grew enough to sever the vine or whatever else may have happened will never be known.  And so it is with us, we may be squeezed by insurmountable difficulties with apparently no clear way out, but if we likewise persevere we will triumph over whatever adversity we may face.  At any rate, this is now a free tree. 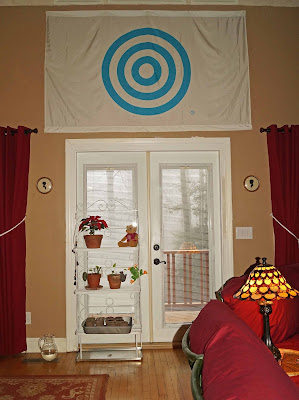 Our dwelling place is rapidly becoming a home; we proudly display this banner and acknowledge it frequently.  Outside the window the trees are barely visible, it was a foggy day and it was a delight to have a safe, warm space to be.

[T]he banner of Michael, the material emblem of the Trinity government of all creation, the three azure blue concentric circles on a white background.  The Urantia Book (605.8)

The symbol of the three concentric circles, which Melchizedek adopted as the insignia of his bestowal, a majority of the people interpreted as standing for the three kingdoms of men, angels, and God. And they were allowed to continue in that belief; very few of his followers ever knew that these three circles were emblematic of the infinity, eternity, and universality of the Paradise Trinity of divine maintenance and direction…. The Urantia Book (1016.5)

All photographs are by Doug Cable