#35:  I am once again parked in my summertime spot in Kiantone, New York.  For any newcomers this is in the Southwestern corner of the state not far from Chautauqua Lake.  To back up a bit, after the last posting I moved from Jacksonville, Florida to Ladson, South Carolina and parked a few weeks.  While there our study group met in my “house on wheels” nearly every week and I also got a tour of downtown Charleston.  From there I moved to upstate South Carolina and met with Marty in Camden.  That much will make for a full posting, so Asheville, North Carolina and Columbus, Ohio will have to wait until another posting, stay tuned.


“Under the soon-coming persecutions by those who hate this gospel of joy and liberty, you will thrive and the kingdom will prosper. But you will stand in grave danger in subsequent times when most men will speak well of kingdom believers and many in high places nominally accept the gospel of the heavenly kingdom. Learn to be faithful to the kingdom even in times of peace and prosperity. Tempt not the angels of your supervision to lead you in troublous ways as a loving discipline designed to save your ease-drifting souls.”  The Urantia Book (1931.1) (178:1.10)


On Thursday morning of his last free day on Urantia, Jesus spoke to a group of apostles and chosen disciples, this quote is from that discourse.  The “subsequent times” mentioned could well refer to our own times when many nominally accept the gospel but they have not been fully informed about its true nature.  The last sentence (emphasis added) particularly caught my attention.  How often are the “troublous ways” we find ourselves in the result of our being lazy and neglecting the Father’s business?  I suspect many of us have been so led, I know I have been. 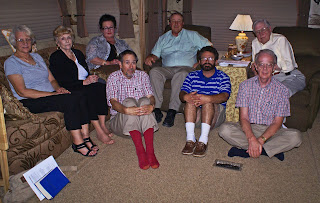 The first meeting in Ladson was on Palm Sunday (by the way, don’t you love Tommy’s red socks in the above photo of our group?) so we read Paper 172, “Going into Jerusalem” describing the first Palm Sunday.  That year, A.D. 30, the original Palm Sunday was April 2, just one day different from the date of Palm Sunday this year.  Each Sunday thereafter, except Easter when we did not meet, we read the following paper.  It is always thrilling to read about those times and discuss them.  They were truly stirring times, if only our brothers and sisters of today knew the true Jesus. 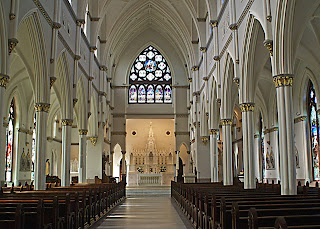 Tommy offered to give me a tour of downtown Charleston.  I lived in the area for thirty-eight years, but I don’t believe I ever had a proper tour of the historic district.  Tommy is a history buff and seems to know the story of who lived in each house.  I parked the Monster (Ford F-350) on the Battery and as we walked about the old part of the city he kept up a lively banter about the historic places we passed.  Our first stop was the Nathaniel Russell house, completed in 1808 and it has been fully restored, giving an idea how the wealthy lived in those times.  Lunch was at the Blind Tiger Pub (no, I just had water and a sandwich thank you) and then to St. Stephen’s Episcopal Church, shown above.  It is the oldest free Episcopal Church in Charleston, meaning the parishioners did not have to pay for their pews.  Another place of interest was a visit to the Aiken-Rhett house, built in the 1820’s and greatly expanded in the 1830’s.  This house has not been restored; one item of interest was in the slave quarters where more than one coat of paint was visible in places on the walls; apparently an effort was made to make these living quarters presentable.  Finally we walked back to the Monster, it was a long walk but a pleasant way to see that historic city.

From Ladson I moved to Joanna, South Carolina where the first visit was to meet Martha Daniels in Camden, which is northeast of Columbia.  She invited me to visit and to show me the area; her book, “Mary Chesnut’s Illustrated Diary” is recently out, Web site.  Mary Chesnut wrote a well-known diary during the Civil War and its aftermath, Marty discovered photographs related to that time period and published them along with the diary as a two-volume set.

For a small city Camden has a significant amount of history, for example two Revolutionary War battles were fought there and many fine old homes can still be seen.  Camden is also well known for its horse races, the Colonial Cup in the fall and the Carolina Cup in the spring.  The above photo was taken in the National Steeple Chase Museum there. 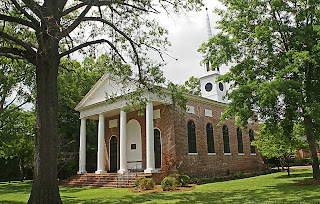 This posting is already a bit long, but I want to share two more photographs from the Camden visit.  This one is of the Bethesda Presbyterian Church, designed by Robert Mills and built in 1822.  In the rear is a distinctive crisscrossing staircase.  After our tour of beautiful Camden we had dinner at the Indigo Jones Restaurant, they even gave us a room in the back to ourselves so I could show her pictures of my travels while we ate. 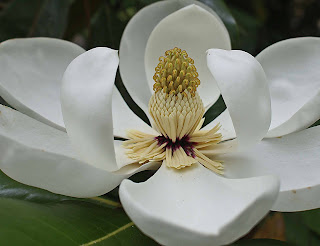 The next morning I went for a short walk in the woods.  As I started out I noticed a magnolia bud just starting to open, but when I returned an hour later it was fully open.  I had no idea they opened so fast.

“Do not allow the magnitude of the infinity, the immensity of the eternity, and the grandeur and glory of the matchless character of God to overawe, stagger, or discourage you; for the Father is not very far from any one of you; he dwells within you, and in him do we all literally move, actually live, and veritably have our being.”  The Urantia Book (139.1) (12:7.12)