# 24:  One more posting before I head north to Alaska!  I have not been to any Urantia study groups recently but I understand there is one in New Castle, PA and one near Pittsburgh, both of which are over 100 miles away.  I will check them out when I get back late this month.  I took the following photograph while sitting on my deck, the leaves have filled in more but it is just a lovely spot.  I can sit at my table and watch the birds at the feeders or just enjoy the surroundings.  Come on up and visit, but not all at once please!

I heard from Anthony in the bayou at Morgan City, LA.  Even though there has been devastation farther north, he had very little trouble from the floods.  However, I understand the snow in the mountains is at record levels and has yet to melt.  There is always something to worry about if you are so inclined.
“Modern men and women of intelligence evade the religion of Jesus because of their fears of what it will do to them — and with them. And all such fears are well founded. The religion of Jesus does, indeed, dominate and transform its believers, demanding that men dedicate their lives to seeking for a knowledge of the will of the Father in heaven and requiring that the energies of living be consecrated to the unselfish service of the brotherhood of man.” The Urantia Book (2083.2) (195:9.6) 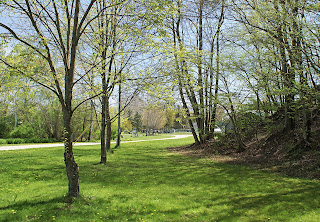 One day I took a ride with my sister and three nieces.  At one place my sister said that her husband had run out of gas near that spot about fifty years ago.  He went to a house nearby for gas and met a couple of limited means; the lady said she had a vision that someday there would be a religious camp there.  Somehow she made it happen and the day we were there that camp, Miracle Mountain Ranch Missions, was having an open house.  There were riding and shooting exhibitions and tours; there was one corral where a mare was running around with her colt, they seemed to be enjoying themselves.  There were no trainers there; they just felt like running. 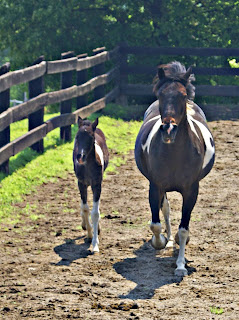 On the way back we were riding along a country road when I suddenly asked my niece to stop the car, the Buttercups were in full bloom and I couldn’t resist taking a picture.  It was a beautiful day to ride and enjoy the countryside.  I have seen many lovely parts of this great land of ours, but somehow this area where I grew up seems best of all, like a comfortable old pair of shoes that fit just right.  In the late summer there are Golden Rods in the fields and later still are the fall colors in the woods. 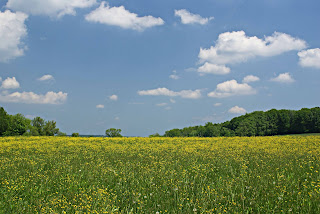 Yesterday we went to a birding conference at the nearby Roger Tory Peterson Institute.  Roger Tory Peterson was born and grew up in Jamestown; for those who do not know, he published the first field guide to birds that enabled casual naturalists to identify birds, bringing into existence the birding avocation.  There were lectures and exhibits, many of which were aimed at children, see below.  The lecture I was interested in was by the nature photographer Michael L. Smith; his photograph “Mad Bluebird” enabled him to quit his job and go into photography full time.  It is impressive how much work he did to set up his photos, which are impressive.  One series showed Ospreys catching fish, freezing them in the act.  The conference also had a bird banding session; it was a joy to see the children hold the birds and marvel at them.  After they were finished holding and looking they were allowed to release the birds.
In addition to the institute, which is about ten miles away, there is a National Audubon Sanctuary less than two miles away from where I am parked.  A few days ago I went there early in the morning; I did not get any great photographs, but the experience of being in the fog-shrouded wilderness watching the deer, the birds, and other wildlife was a real treasure. 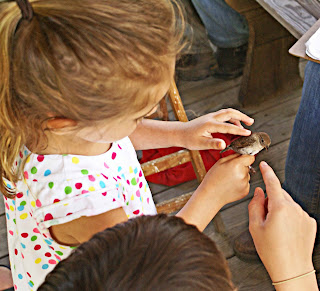 See you after I return from Alaska!
“It is the business and duty of society to provide the child of nature with a fair and peaceful opportunity to pursue self-maintenance, participate in self-perpetuation, while at the same time enjoying some measure of self-gratification, the sum of all three constituting human happiness.”  The Urantia Book (794.12) (70:9.17)