We returned safe and happy after a memorable and absolutely fabulous excursion to Costa Rica!  Our naturalist on the tour was Patrick McMillan, I recommend watching his show “Expeditions” on Public TV (PBS); this trip was like being inside one of his shows for nine days.  His knowledge and passion for the natural world which he willingly shares is part of what made the journey such a joy.  Betty Lou and I flew from Miami to San Jose, Costa Rica; that flight was, well see below for details.  The next day on our way out of town the tour stopped at the town of Sarchi’, which has what is billed as the world’s largest oxcart and it also has many talented artisans.  We spent three nights at Las Lagos Hotel and Spa where we soaked in the hot springs one evening.  Our rooms were at the base of the Arenal Volcano, which was covered in clouds until the last day.  While there we floated on a raft down the river and hiked in a rainy rain forest.  That is about all we will have space for this posting.  Stay tuned for the next installment.

The theme for the quotations in this posting is naturally: travel.  Especially meeting with and observing other cultures during our travels.  The people we met in Costa Rica were certainly friendly, cheerful and hard working.  Our bus driver was especially expert in maneuvering our rather large and snazzy red bus around tight curves and up the mountainside.  We also had an excellent local guide, Pablo, who gave the history of the regions we visited.

While it is true that many men and women must assiduously apply themselves to some definite pursuit as a livelihood vocation, it is nevertheless wholly desirable that human beings should cultivate a wide range of cultural familiarity with life as it is lived on earth. Truly educated persons are not satisfied with remaining in ignorance of the lives and doings of their fellows.  The Urantia Book (1674.2) (149:4.6) 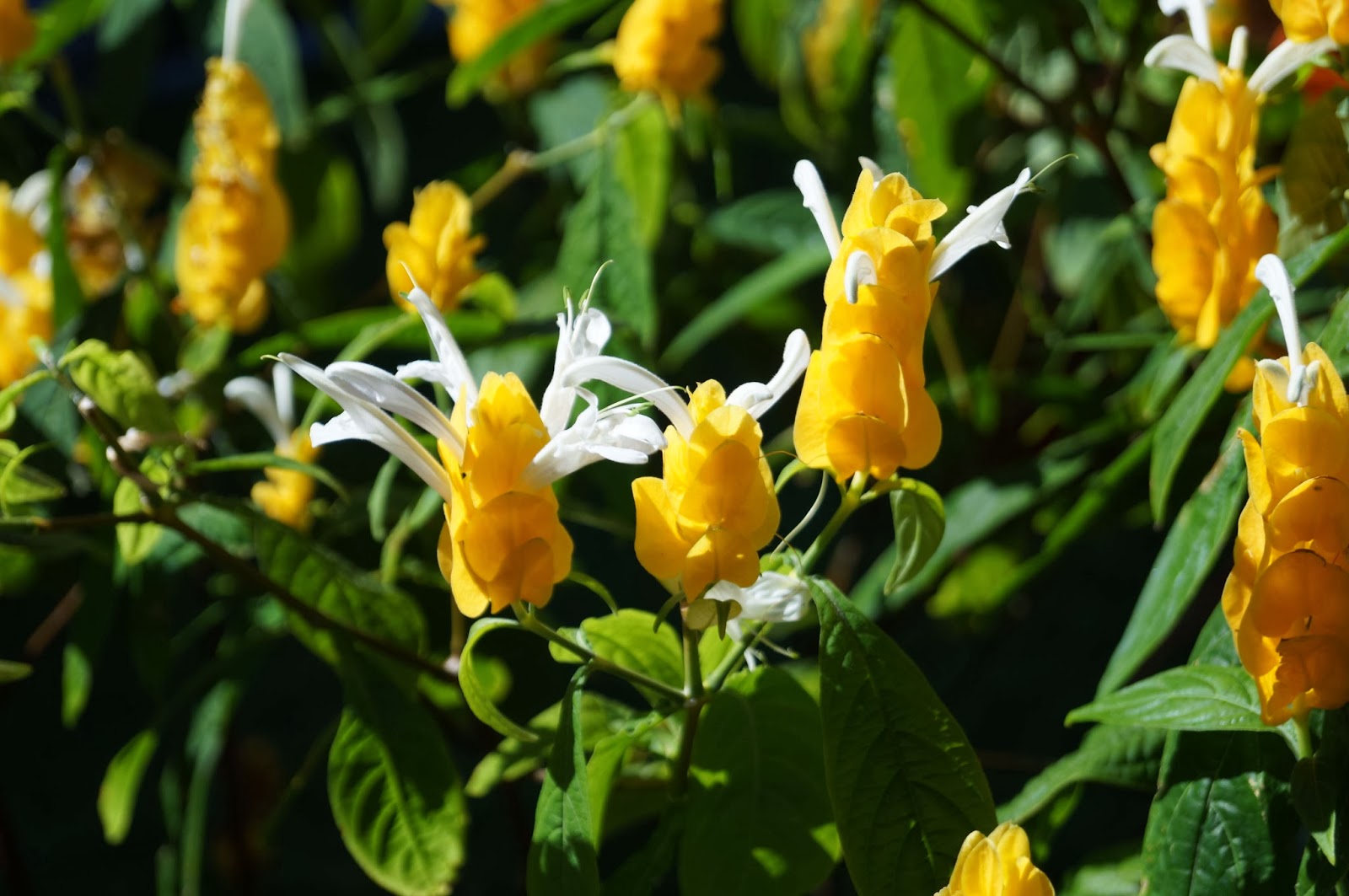 When I checked in at the counter before boarding our flight from Miami to San Jose, Costa Rica I was told that they did not have two seats together so they had to put us in first class, row number one no less.  That meant comfortable seats, Champagne treatment and an excellent meal.  What a start!

Our Hotel in San Jose was the Wyndham, a nice enough place but nothing like the other hotels we stayed at later in the trip.  Our first day we rode northwest toward the Arenal Volcano; the main stop along the way was at the small village of Sarchi’.  Furniture making started here about 1890; our tour included a look at the water powered equipment used in those days and which is still in working order.  There are skilled artisans painting various brightly colored items that have designs similar to the wheel below.  The oxcart design was based on traditional carts used historically to get produce to market and it was built in 2006 to get the town listed in the Guinness Book of World Records; the wheel of the oxcart shown below must be over six feet in diameter.  That cart would need some really big oxen to pull it. 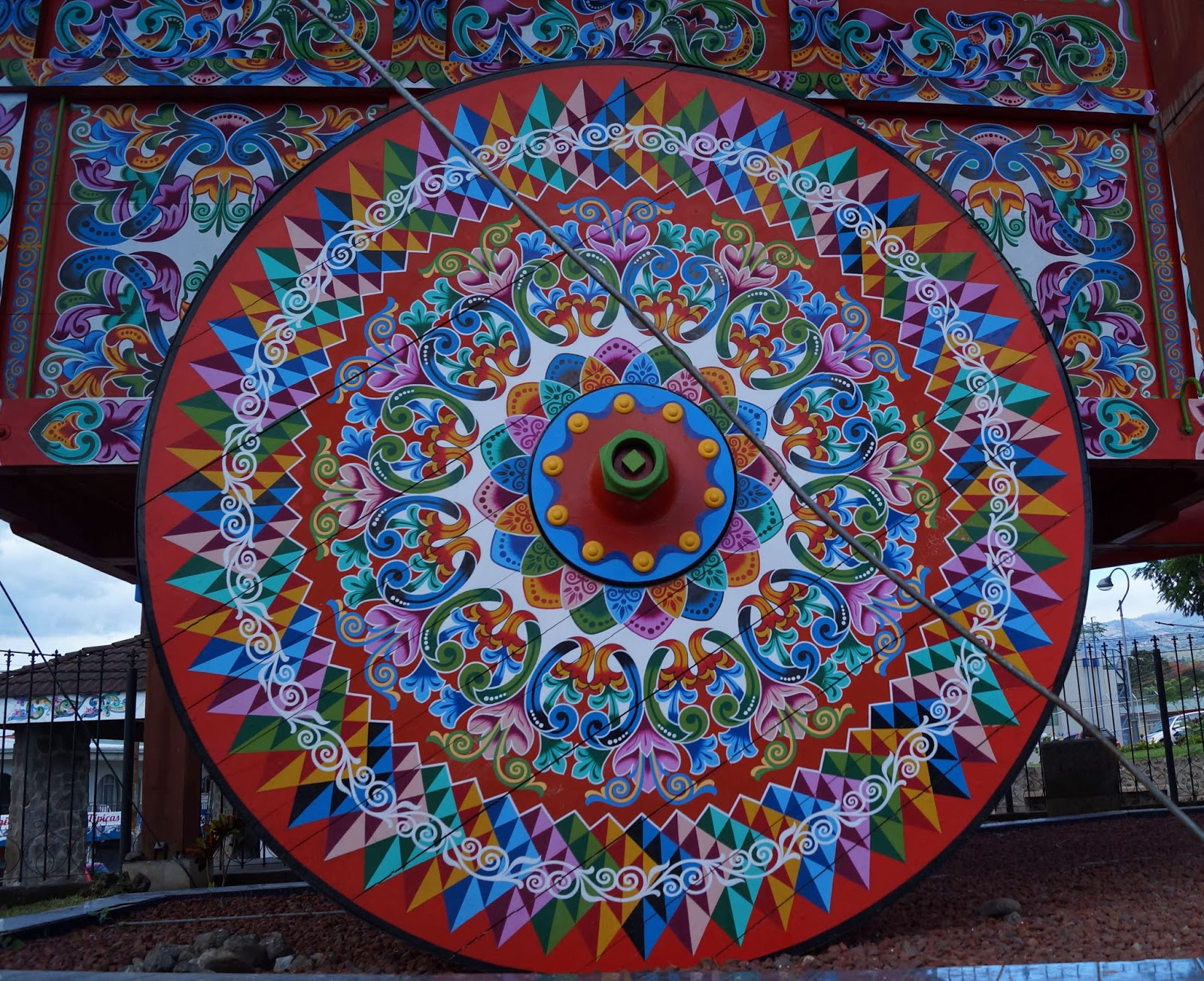 We stayed three nights at Los Lagos Hotel, Spa and Resort in La Fortuna.  As I said above, it is located at the base of the Arenal Volcano, which erupted in 1968.  The town was formerly called El Borio but when the volcano erupted the blast went the other way and destroyed two villages on the other side of the volcano.  Because this village was spared it was renamed La Fortuna, or the Fortunate.  After our travels we soaked in the outdoor hot tub, fed by natural hot springs.  This hotel had everything you could want; after we returned one day the bath towels were folded into the shape of an elephant, fancy indeed!  The dining area was open on the sides and colorful tanagers and other birds would appear for handouts as well as a few friendly lizards.  The hotel also had a butterfly garden; there were lots of things to see and do. 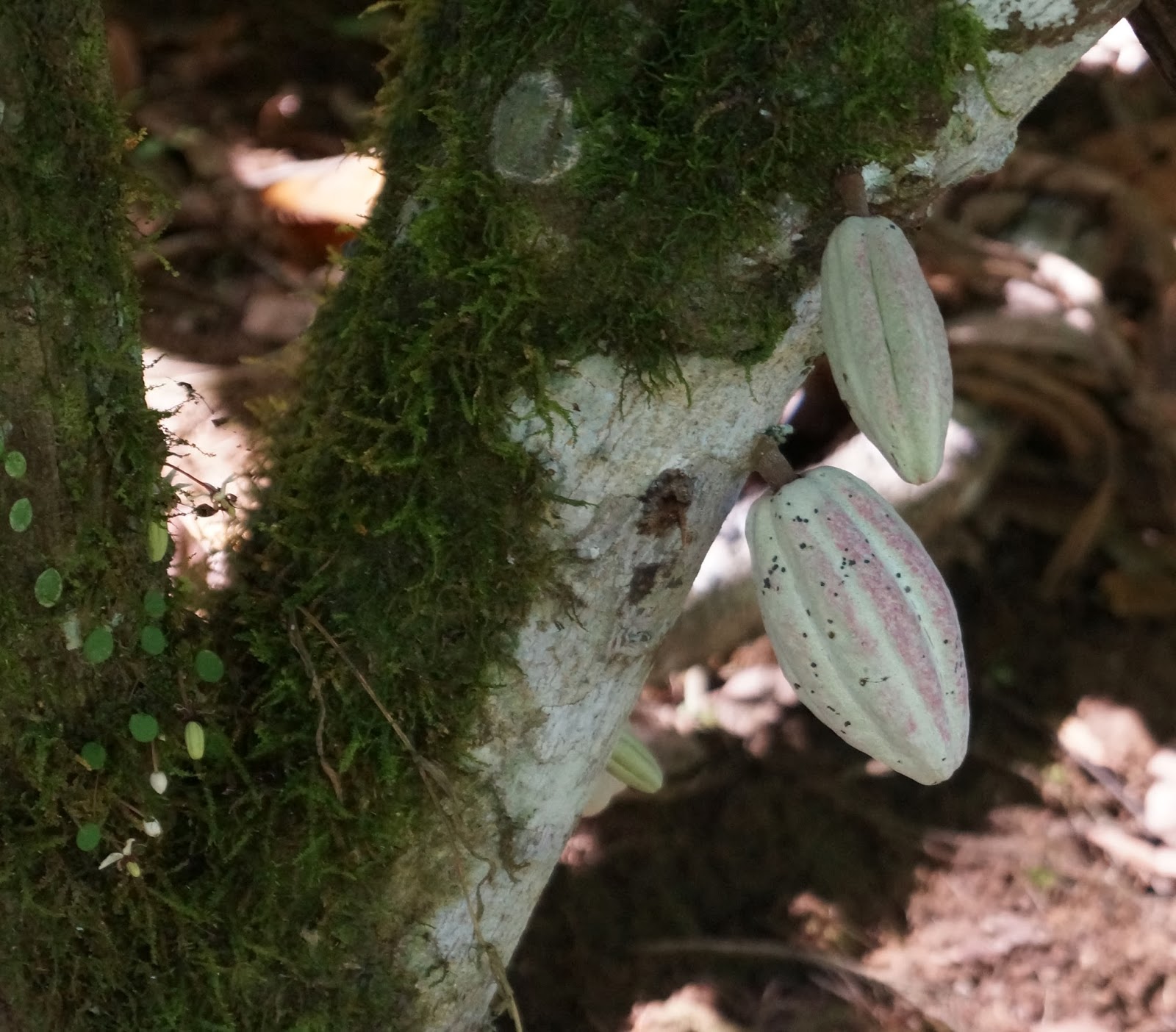 The next day we went on a raft adventure down the Peña Blancas River; each raft held six people plus the local guide.  Four passengers in each raft were asked to help with the paddling; since I had my camera they did not give me a paddle.  Betty Lou and Patrick, our naturalist each had a paddle but I did not; to make up for it I took lots of pictures, but they could not capture the feeling of being out in this marvelous place enjoying that corner of our world.  It was a joy to see the unfamiliar trees and look for critters.  We stopped along the way for light snacks at a 76 acre farm started by Don Pedro.  When he was a young man he bought the land for about two dollars (100 Colones) but it took him a full year working the land to pay for it, that being a lot of money for him in those days.  The farm is isolated and there are still no roads leading to it, only a river on two sides.  He is now 101 years old (with another birthday soon) and was present for our gathering.  He worked the farm until he fell at age 94.  A grandson now runs the farm and there were four generations of his descendants present.  Don Pedro looked frail but was very much present, he even said with vigor one of the two English words he knows: “Whiskey.”  He and Betty Lou had a short conversation with a grandson as interpreter.

Just imagine: one of our most important foods comes from pods such as shown above: Chocolate! 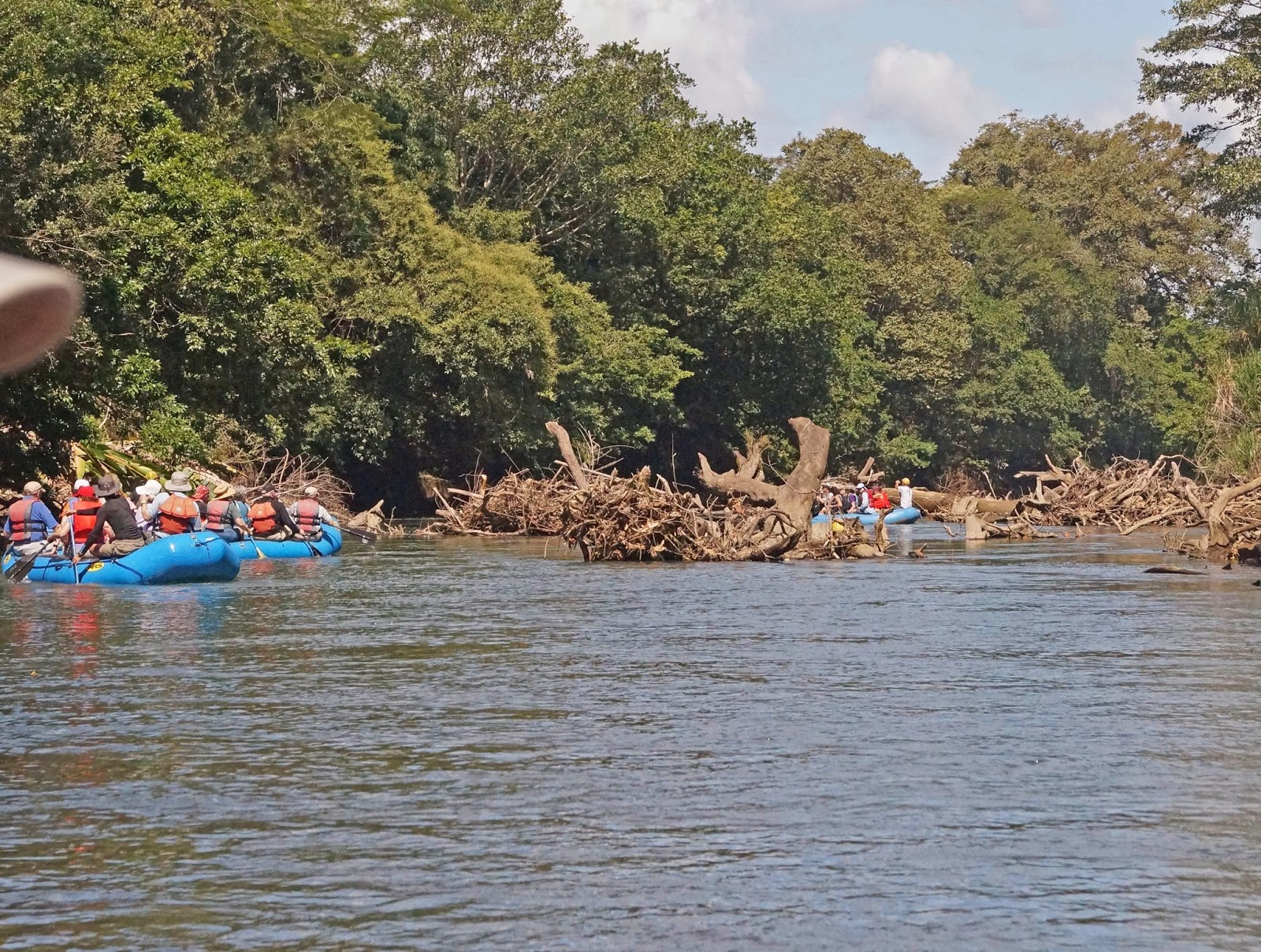 Floating Down the River

After that interlude we resumed our downriver excursion.  Along the way we saw a small Crocodile in the water, monkeys in the trees, lizards (called Jesus Christ Lizards because they move so fast they are able to walk on water, however the ones we saw were not moving at all) leaf cutter ants, and familiar birds such as the Snowy Egret and Little Blue Heron.  At one point, shown above, there were stumps in the river with roots sticking out that were a challenge to get around.  One raft got stuck and our guide tied our raft down and waded back to help free it.

Our guides were knowledgeable and hard working.  Only occasionally did they call for assistance from the paddlers.  It was an excellent day floating down the river; even more enjoyable because I was manning a camera instead of a paddle.  Eventually the drifting came to an end and we were reunited with our red bus.


The next day we drove to the Tenorio Volcano National Park for a hike into the Rio Celeste region.  The day was overcast and rainy; one of the best investments I made was to pay three dollars to rent a pair of well-fitting rubber boots and leave my new white walking shoes behind.  The path was a challenge with lots of mud and running water but this walk in a rain forest was a special experience.  There was a lovely waterfall that we climbed down a flight of stairs to see.  Nearby several types of wild Begonias were growing on the hillside.  Everyone enjoyed this hike through the rainy forest; even one lady who fell down a couple of times said she liked it.  The variety of trees was remarkable; even though they were packed tightly together rarely could you see two of the same kind of tree from any one spot.  The trunks were covered with moss and at one point Patrick pointed out a variety of moss that grew only one cell thick, we could see through it clearly.  Again, this is one of the joys of these tours, you are with people who enjoy being outside exploring the natural world and a few raindrops could not dampen our spirits. 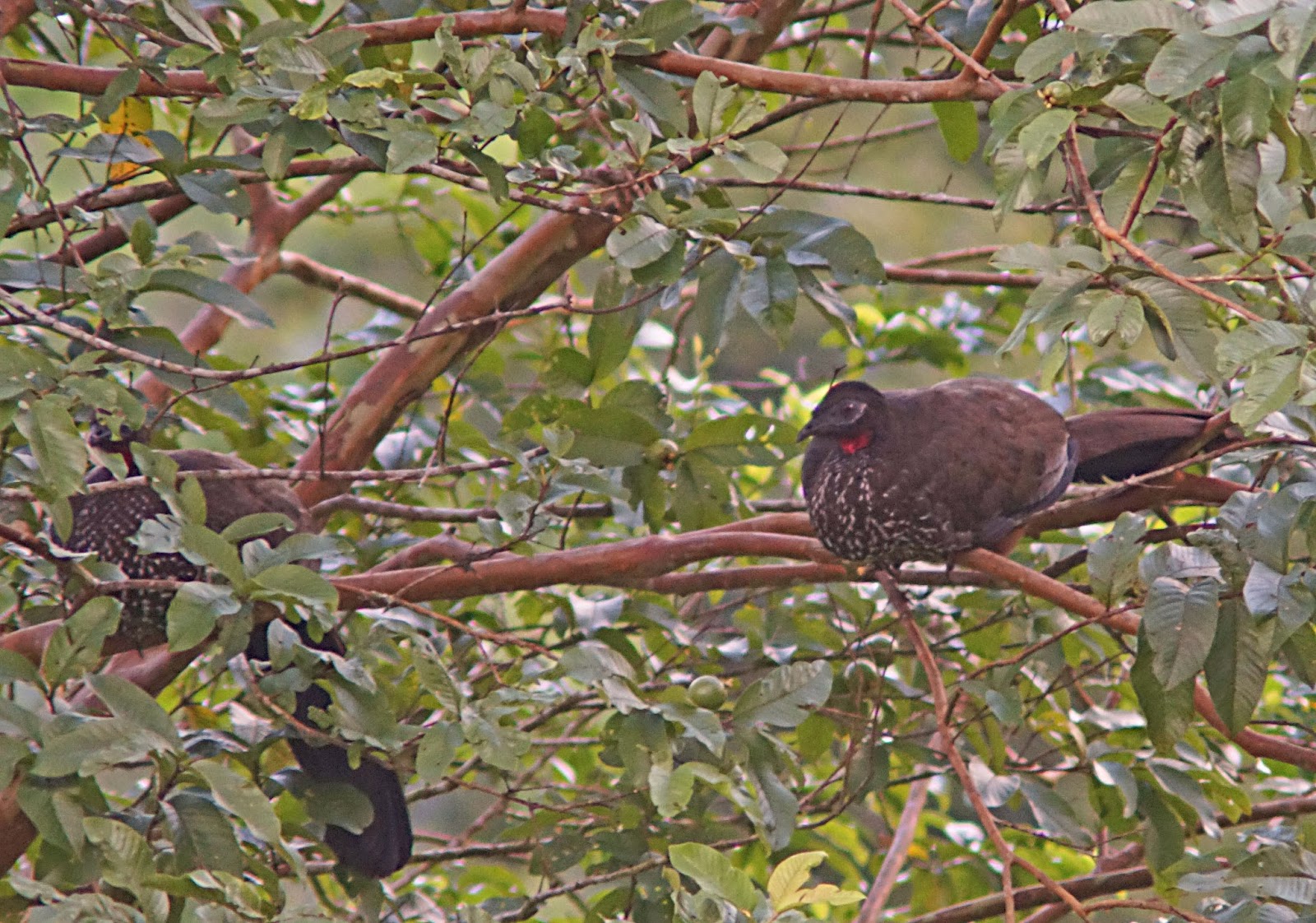 I took the photo of these birds while standing on the balcony of the room back at the hotel.  They were quite happy in their tree; at one point they touched beaks as if one were giving the other something.  The hotel had a small lake where they grew tilapia, which we had for dinner one evening.  I guess we should pause here for now; see you next time when we will move to the pacific coast and then into a cloud forest.

The greatest twentieth-century influences contributing to the furtherance of civilization and the advancement of culture are the marked increase in world travel and the unparalleled improvements in methods of communication. But the improvement in education has not kept pace with the expanding social structure; neither has the modern appreciation of ethics developed in correspondence with growth along more purely intellectual and scientific lines. And modern civilization is at a standstill in spiritual development and the safeguarding of the home institution.  The Urantia Book (909.6) (81:6.25)