Well, I’ve done it again, frittered away the time without getting a blog posted.  I am now in South Carolina having made the journey here without incident.  Since the last entry I visited a study group at Indian Rocks Beach, Florida that meets right on the Gulf, and also visited another in the Florida Panhandle at Panama City, visited friends in Louisiana, did some exploring there and then moved on to Ladson, SC.  While here I visited a nearby state park and am working on the next booklet.  Guess we had better get started.

The theme for the quotations in this posting is faith, they are among quotations I have gathered for the next booklet, “Mature Faith -- Faith of Jesus Part 3.”  I will give a notice when it is finished.

Belief has attained the level of faith when it motivates life and shapes the mode of living. The acceptance of a teaching as true is not faith; that is mere belief. Neither is certainty nor conviction faith. A state of mind attains to faith levels only when it actually dominates the mode of living. Faith is a living attribute of genuine personal religious experience. One believes truth, admires beauty, and reverences goodness, but does not worship them; such an attitude of saving faith is centered on God alone, who is all of these personified and infinitely more. The Urantia Book (1114.5) (101:8.1)

Thanks to The Urantia Book I have faith. 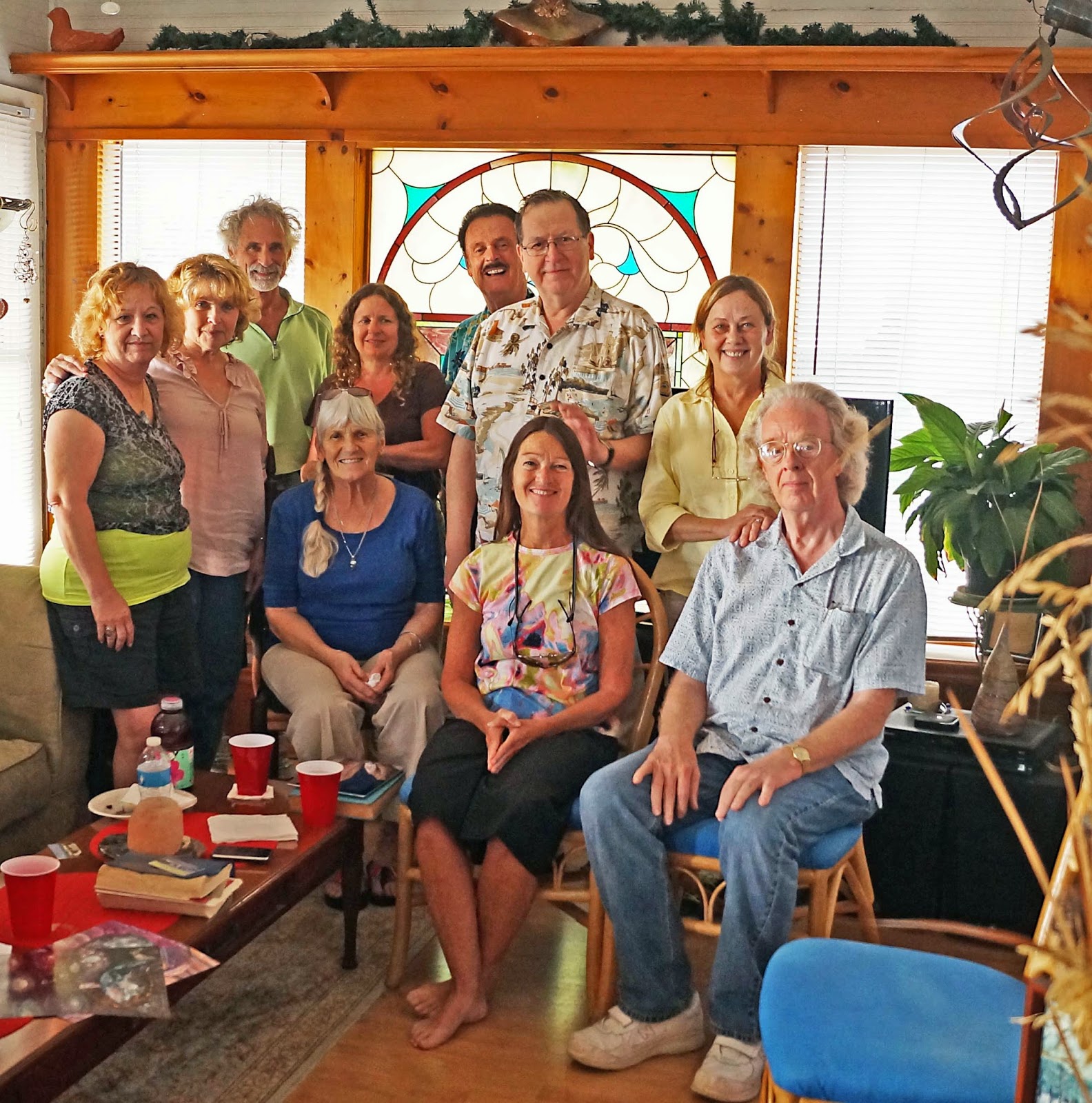 Indian Rocks Beach Study Group, Back row: Ann, Susan B, Peter, Dawn, Ernie, Joe, Betty Lou; Front row: Joan, Susan M, Wandering Urantian
Betty Lou visited me briefly in Dade City Florida to install some fancy, programmable colored LED lights inside my house on wheels (a Coachman Wyoming fifth wheel).  Her son has a small startup company, hookedup Inc. that sells the lights and a program to control the color patterns; if I get to your area stop by so I can show them off.  While she was there we drove to Indian Rocks Beach, which is west of St. Petersburg on the gulf, for a study group meeting.  As you can see from the photo it was well attended.  We read from Paper 5, “God’s Relation to the Individual,” starting at section 2, “The Presence of God.”  It was a joy to participate in the interesting discussions; this is a good group and I hope to visit them when I am again in the area.  We even found a good Mexican restaurant on the way back to Dade City.

I have visited Meda’s group in Panama City several times; they meet in a small building, called the Capstone House, which has all sorts of spiritual classes and such: including Reiki healing and meditation classes as well as a regular Urantia Study group.  Meda is an excellent facilitator, but sometimes her attendance is a bit low.  On my way there I stopped at my usual restaurant, Salty Sue’s for seafood. 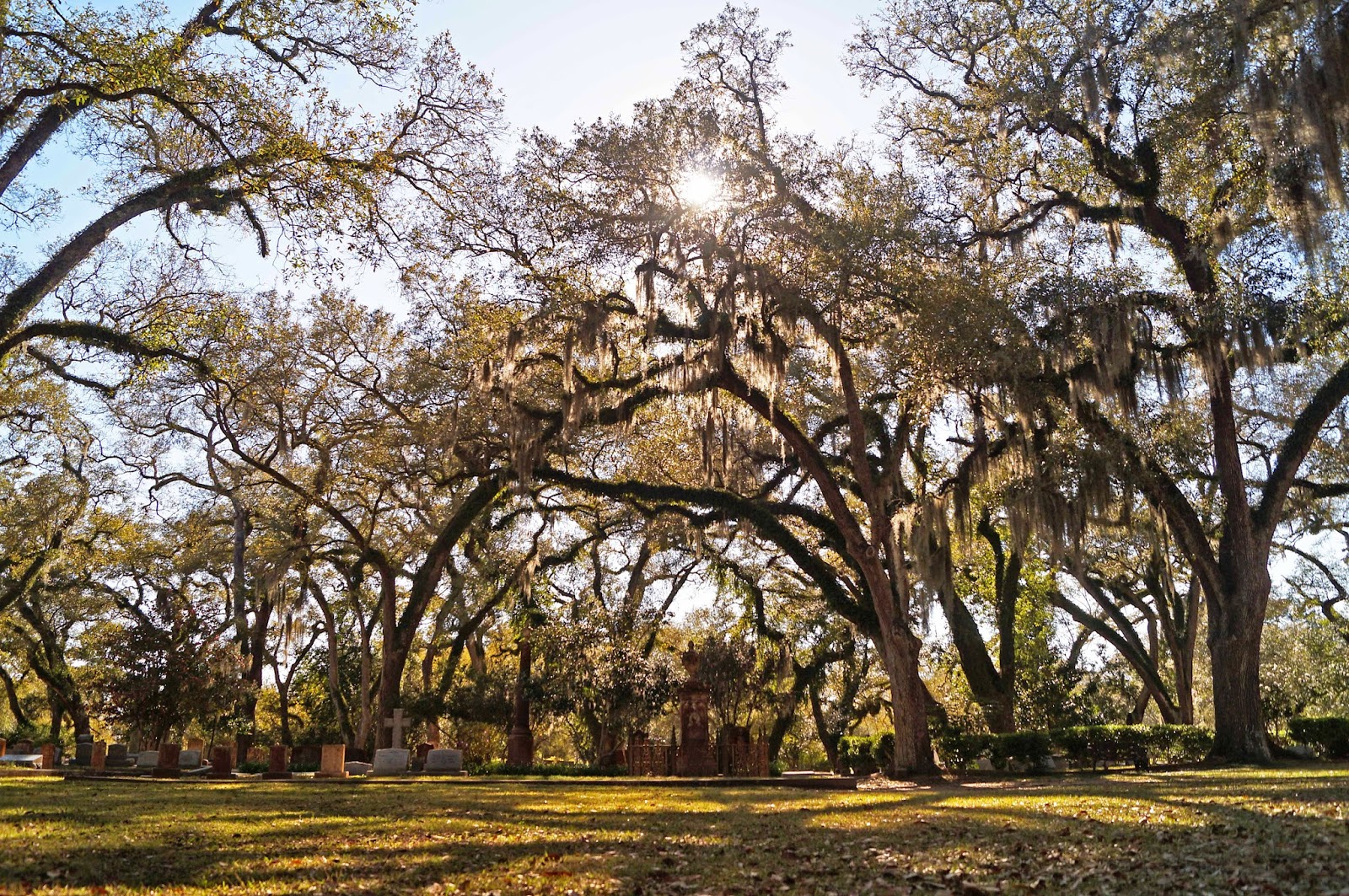 From there I moved to Livingston, Louisiana for a couple of weeks.  I visited Virginia and Charles in Baton Rouge as well as went exploring in Tickfaw State Park.  Virginia and I visited a study group in Mandeville on Lake Pontchartrain; it meets in Vianne’s Tea House, a lovely tea shop with countless kinds of tea, which we sampled during the meeting.  Peter and Ed, two long time readers, are there every week and have fascinating discussions.  Virginia and I also drove a bit north of Baton Rouge to St. Francisville to meet Michael at a small town coffee house; he is a long time reader and we had a good conversation that we truly enjoyed.  St. Franscisville is a quaint town that has been bypassed by a bridge over the Mississippi River; formerly there was a ferry near the town, requiring tourists to go through the town to get over the river.  The Grace Episcopal Church was started in 1827 and the Union general who shelled it during the Civil War is buried in its Churchyard.  We learned this from somebody we met and talked with during our visit to the church, actually he was a beekeeper, but that is a long story.  Instead of bats in the belfry they had bees in the eves.  James Audubon lived in the area and there is an Audubon museum nearby; I hope to return there on my northward trip next spring. 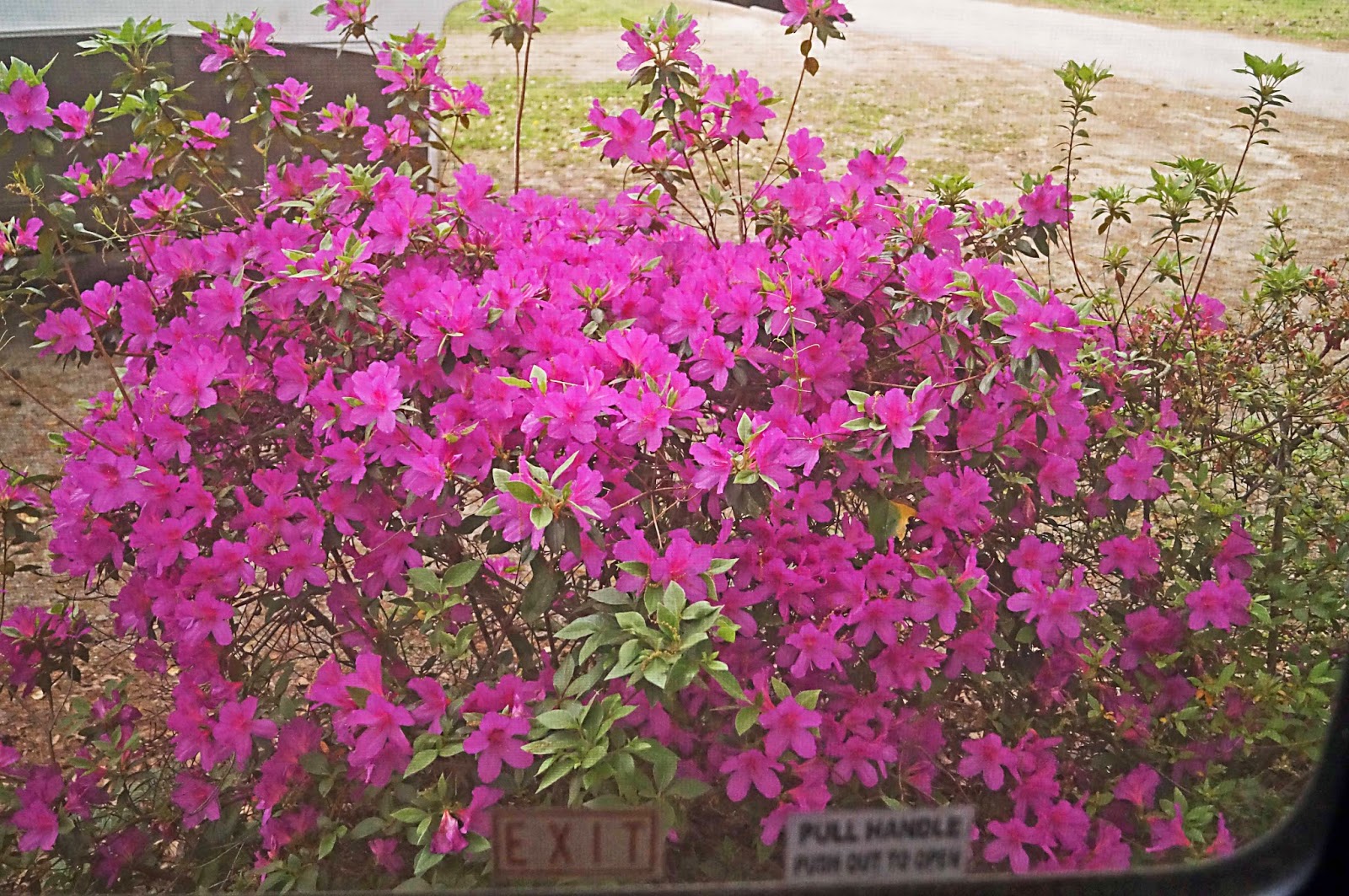 As stated above, my journey here was uneventful; that is much better than last year when I had three tires blowout on my house on wheels, thankfully only one at a time!  One interesting occurrence this time northward happened on I-75 north; I was driving in the right lane and there was a SUV ahead of me in the next lane over.  Suddenly cloud of black stuff came out of the bottom of its engine compartment and I had oil all over my windshield.  I naturally slowed down to let him pull over but my windshield wipers were squeaky for some time afterwards. The azaleas are in full bloom here, even in the campground, and that is a nice view out my kitchen window, no?  Nearby Summerville had its annual azalea festival last weekend; it can be quite beautiful there with all the spring flowers but I prefer not to deal with the crowds of visitors they have at this time. 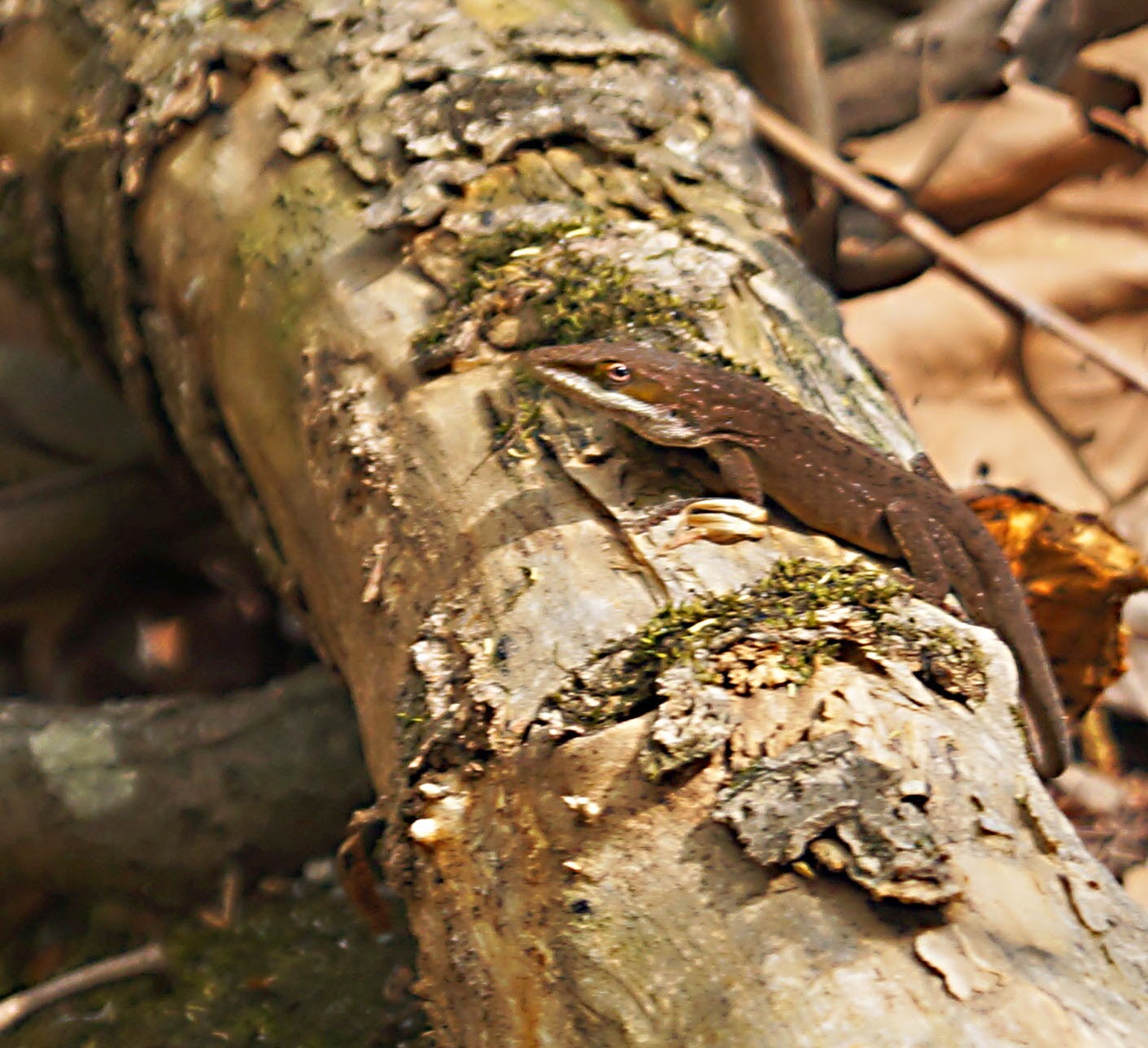 I took time out from working on the next booklet to take a walk in the woods at Old Santee Canal State Park, which is about 25 miles away in Monks Corner.  I fear I inadvertently upset this critter’s mating ritual, sorry about that.  I saw a small salamander and crouched down to watch her; she had her eyes fixed on something closer to me.  When I saw where she was looking I spotted this male showing off, doing his pushups and displaying.  I stayed perfectly still for quite a while but I guess my presence made him nervous or perhaps he was shy.  At any rate he watched me instead of tending to his business.  She lost interest and wandered away so the least I could do was take his portrait.

The consciousness of a victorious human life on earth is born of that creature faith which dares to challenge each recurring episode of existence when confronted with the awful spectacle of human limitations, by the unfailing declaration: Even if I cannot do this, there lives in me one who can and will do it, a part of the Father-Absolute of the universe of universes. And that is “the victory which overcomes the world, even your faith.”  The Urantia Book (59.5) (4:4.9)