#15:  I want to finish describing my summertime travels before I set out next week. I plan to park the Wyoming (my ‘house,’ a fifth wheel) at Bath NY for a couple of weeks so I can attend a meeting in Waverly NY and also visit Letchworth State Park. From there I plan to get on I-81 south and make a quick stop near Williamsport MD before going on to Lynchburg VA. I would be glad to meet readers in the Maryland area so let me know as soon as possible if you want to meet, otherwise I will wander onward.

"It is our sincere belief that the gospel of Jesus’ teaching, founded as it is on the father-child relationship, can hardly enjoy a world-wide acceptance until such a time as the home life of the modern civilized peoples embraces more of love and more of wisdom. Notwithstanding that parents of the twentieth century possess great knowledge and increased truth for improving the home and ennobling the home life, it remains a fact that very few modern homes are such good places in which to nurture boys and girls as Jesus’ home in Galilee and John Mark’s home in Judea... The love life of a wise home and the loyal devotion of true religion exert a profound reciprocal influence upon each other. Such a home life enhances religion, and genuine religion always glorifies the home.

"... As long as we teach the child to pray, 'Our Father who is in heaven,' a tremendous responsibility rests upon all earthly fathers so to live and order their homes that the word father becomes worthily enshrined in the minds and hearts of all growing children." Urantia Book (1922.4-1923.1) (177:2.6, 7)


I mentioned in the last blog that I flew to Charleston South Carolina, was met by three members of our Summerville study group and we went to Boone North Carolina for Michael’s birthday party.  They wanted attend the meeting, but also they wanted to see where I spend the summertime and to visit Niagara Falls.  I offered to be their chauffeur, although I suspect it has been nearly a half century since I was last at the falls.  That time we needed no passports, we were simply asked where we were born and waved on our way. 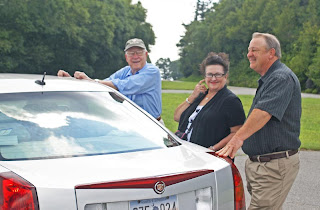 Bev Rogers, Cynthia Rogers, Manning Rogers
The shortest way north from Boone North Carolina was along the Skyline Drive, always an enjoyable journey. We arrived at the Hidden Valley Campground in Southwestern New York State where the Wyoming is parked and spent a couple of nights before venturing further.


We first went to Lockport New York to see a part of the Erie Canal and its locks. We had lunch there in a restaurant overlooking the canal. One of the waitresses had a pretty face and short blond hair, but she was dressed all in black and was so grossly overweight it would take at least three people to reach around her hips. I wondered what emptiness, what longings could drive her to such a state; was something missing in her family life when she was growing up? We see such individuals everywhere these days, a sad commentary on our times.

Another sad commentary came just as we were going through customs. The agent was processing our passports when suddenly he looked into the car and shouted “TURN OFF THAT PHONE AT ONCE!” I was expecting to see machine guns aimed at us at any instant, all because Manning answered his cell phone at the wrong time. What kind of society are we creating? 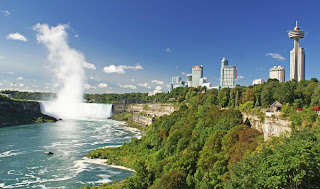 It was raining our first night at the falls so we did not see them lit up after dark, but outside of that the weather was perfect throughout.  The flowers were springlike and well tended (just for us tourists).

On a sudden impulse we got on the Maid of the Mist boat ride and were able to get a closeup look at the falls. A guide we talked to before boarding suggested I ride on the first deck as it would be less crowded than the top and he gave me pointers on how to keep my camera dry, sort of. It was a fun ride. 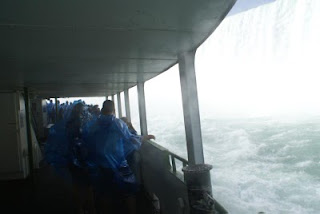 We had no set itinerary but we visited Niagara on the Lake and went on to Toronto.  There was some discussion about seeing the sights there, but I am not a big city person and there would be too much walking for Bev.

We drove along Lake Ontario and spent the night outside of Kingston. Not our favorite of motels, I didn’t even want to get on the floor to do my morning exercises there! 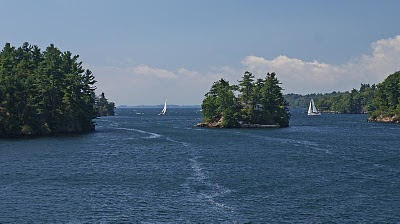 The next morning we went into Kingston which is at the end of the lake. We intended to take a boat ride into the Thousand Isles; there was one leaving at eleven which was an hour and a half long. I let the others off to get tickets while I parked the car but when I came back Manning shouted “Hurry!” It seems that the boat leaving at eleven was full but the one leaving at ten thirty had just enough spaces for us, it was a three hour tour and was leaving momentarily. It was fabulous! The shouter ride would miss the prettiest sights and our boat had a two piece band with live music!

In about a week I took nearly six hundred pictures and it was a wonderful excursion, except that we all came down with a bug of some sort afterwards. We all survived, but Bev needed a stay in the hospital. He has fully recovered now and we are all well and ready for another adventure.


By the way, in the last week a flock of about eight wild turkeys has wandered past my house several times; I will miss the wild life in this campground.
Posted by Doug at 8:11 AM No comments:

#14:  Whew! Last night I counted how many states I have visited or driven through this year, it was fifteen states and one Canadian Province. No wonder I feel a bit drained; it is time to get my batteries recharged because it will soon be time to move my house once again. This has been a fantastic year already and there are more than three months left! I have many pictures and I would be glad to show them whenever.

The following quote from the Urantia Book will need a bit of explaining but I chose it because it relates to a thought I had during the meeting near Boone North Carolina which I will discuss below. For those of you who are unfamiliar with the Urantia Book, one of its important teachings is that each of us is indwelt by a prepersonal fragment of God called the Thought Adjuster (it is also described by other names such as Mystery Monitor; one name which occurred to me is God’s Promise of Eternity.)

"The Thought Adjuster is engaged in a constant effort so to spiritualize your mind as to evolve your morontia soul; but you yourself are mostly unconscious of this inner ministry. You are quite incapable of distinguishing the product of your own material intellect from that of the conjoint activities of your soul and the Adjuster.

"Certain abrupt presentations of thoughts, conclusions, and other pictures of mind are sometimes the direct or indirect work of the Adjuster; but far more often they are the sudden emergence into consciousness of ideas which have been grouping themselves together in the submerged mental levels, natural and everyday occurrences of normal and ordinary psychic function inherent in the circuits of the evolving animal mind. (In contrast with these subconscious emanations, the revelations of the Adjuster appear through the realms of the superconscious.)"  Urantia Book (1207.2,3) (110:4.2,3)

I flew to South Carolina and met three members of our Summerville study group; we then drove to Boone North Carolina. The actual meeting celebrating Michael’s birthday was nearby at Valle Crucis, but the sleeping arrangements there were dormitory style so we stayed in Boone instead. This photograph gives an idea of the beautiful countryside and this building is where we had our meals. 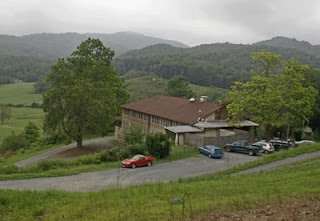 The meetings were inspirational and varied: Dick Bain showed some of the Jesus videos he has done, there were musical sessions led by an expert hammer dulcimer performer and a workshop session, more on this below. 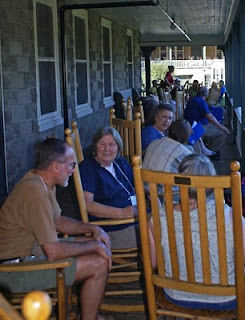 The leader of the group was Steve Law who is at the bottom left in this photograph. As usual, one of the most rewarding parts of the meeting was the time spent talking with other readers of the Urantia Book. There was also a small chapel next to the lodge, one evening there was a moving service using a fine pipe organ (unfortunately I managed to misplace my meeting notes so I cannot give the special name of this service.)

One afternoon we split into groups for discussions. I chose the one on outreach efforts since I have started doing something along this line. During the discussion the above quote was read to our little group. At that time I had the inspiration that such thoughts which arise suddenly could be tested as follows. If the thought or proposed action glorifies God then it might perhaps have originated from the Thought Adjuster but if it glorifies me or another person then it is unlikely to have a worthy source. It has happened more than once that the messenger gets glorified while the message becomes secondary. 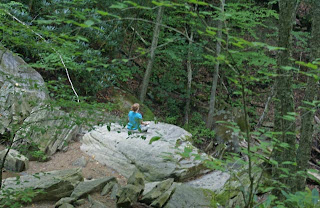 One afternoon I hiked to some nearby falls. This young lady was not part of our group, but she has the proper meditative attitude for such a beautiful place.

There were a group of young students sharing the small facility with us who were singers from the Charlotte school system, frequently we could hear them practicing. On the final night our group gathered on the above porch for a short serenade. The singers filed in quietly and the director gave an introduction. The porch was in total darkness and it would have been better if we could have seen them, but their music, accompanied only by crickets and other night sounds, was heavenly.

After the meeting the four of us drove here to Hidden Valley and then into Canada, but that is the subject of another blog.
Posted by Doug at 2:39 PM No comments: