#43:  Well! I am safely parked for a month or so in Ladson, South Carolina after a couple of bumps in the road that could have been seriously painful.  Before leaving Montgomery I did a tour of the historic sights in the city; the capital of Alabama has a rich history both for the Civil War and the Civil Rights movement.  The move from Montgomery to Madison, which is south of Athens, Georgia on I-20, was going fine until, guess I will save the gory details for later.  The highlight of my stay in Georgia was the visit with Dr. Roger Paul and his active study group.

When tempted to criticize evolutionary religion, be careful. Remember, that is what happened; it is a historical fact. And further recall that the power of any idea lies, not in its certainty or truth, but rather in the vividness of its human appeal.  The Urantia Book (1005.5) (92:3.3) 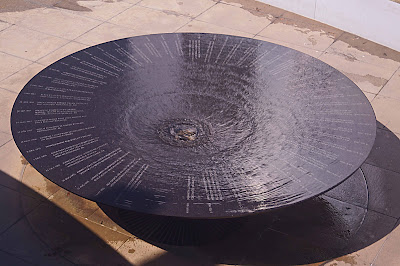 This Civil Rights Memorial is in an open plaza, accessible at all times; it is about ten feet or so in diameter and has recorded in black granite the names of martyrs and dates of significant events in the Civil Rights movement, there is water flowing out of the center and over the edge.  I recorded a video while walking around it, but it is a bit wobbly; later a guide at another stop asked if I had been there and I said yes and that I had the wet pocket to prove it.  While taking the video I had gotten a bit too close to the edge where water runs down.  Inside the memorial center building is a Wall of Tolerance where the names of people “who have pledged to take a stand against hate and work for justice and tolerance” are displayed.  This is a large screen where names scroll slowly upward; there are terminals where visitors can take the pledge and have their names entered.  I took the pledge and entered my name, which was displayed for a short time.  I took a photo of it but did not realize I was shooting a black wall with my name “in lights;” the exposure was eight seconds long so the result was quite jiggley, I did not have a tripod with me.

This tour of downtown Montgomery was entirely on foot; everything is located within several blocks so this is the best way to see the sights.  I walked past the Greyhound bus terminal where the Freedom Riders were attacked and beaten on May 20, 1961.  There is a museum inside but I was there on Thursday morning and the museum is only open Friday and Saturday afternoons.

I went into the First Baptist Church, founded in 1829, thinking it was the church Martin Luther King Jr. preached at but was informed that church is up the road.  This church does have a beautiful stained glass window, which I photographed.  Also up the road is the state capital building.  Jefferson Davis was inaugurated as president of the Confederate States in front of this building and George Wallace made some of his inflammatory speeches here. 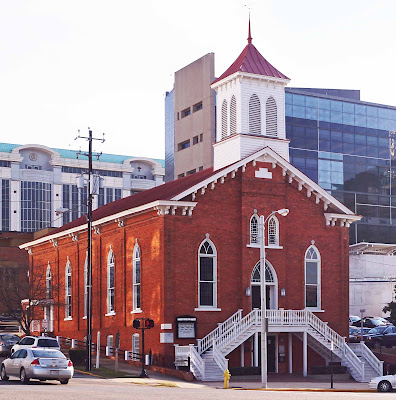 The Dexter Avenue Baptist Church is the only one where Dr. Martin Luther King, Jr. was the principle preacher; his father held that post at the church in Atlanta.  He preached here from September 1954 to February 1960 when he went on to lead the civil rights movement.  The first worship service held in the sanctuary was on Thanksgiving Day 1889.  The stained glass windows are not original but the pews have not been refinished and the wear of the years can be seen on them.  A few blocks away I also toured the parsonage where he and his wife lived and where two of their children were born.  As much as possible all the furnishings in the house are from the time he lived there.  I even stood in the kitchen where Dr. King had a moving spiritual experience during the dark times of the Montgomery bus boycott. 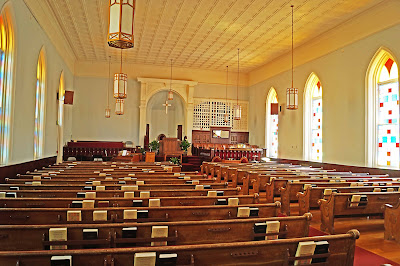 This church is only a few doors down from the capital building; my tour guide Tina said that from his office Martin could see the capital building and keep his “eyes on the prize!”  Tina was an excellent guide, allowing me all the time I wanted taking pictures.  A mural is painted on a wall below the sanctuary (they do not allow pictures taken of it), which was painted during a restoration project in 1979 -80.  This mural depicts scenes from Dr. King’s life and many of those involved in the struggle are shown on this wall.  Tina was pleased that I was able to identify several of the people shown there, including a very young Julian Bond.

While moving my “house on wheels” from Montgomery to a bit beyond Atlanta along I-85, just past an exit one of the tires on my house, which is a 36 foot fifth wheel, blew out.  I looked back and saw black smoke coming out of the back (not a good sign!); this was my tire being disintegrated and there was very little left of it.  Fortunately I have AAA RV service, so I called them and all it cost me was a lost half hour. I made this move on Sunday hoping to minimize some of the Atlanta traffic, fat chance!  Right where I-285 connects to I-20 there was major construction and it took an hour to go about a mile.

At last I made it to Madison, Georgia, which is on I-20 south of Athens.  Madison is a quaint little town and the campground was certainly better than the one in Alabama but it seemed a long way from everything. 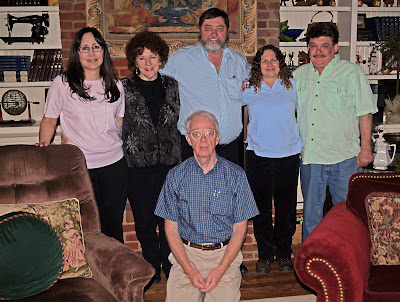 Previous years I have been going to Texas after Louisiana but this year I received the definite urge to visit Atlanta instead.  I am unhappy I did not get to Texas again (Carroll and Skip wanted to show me their farm) but I just knew I was to go to Atlanta.  When I feel that our unseen friends have given me a request I make every effort to comply.  This group, led by Dr. Roger Paul, is a vibrant group and they are making plans to become a church, the Fifth Epochal Revelation Fellowship.  They have an excellent web page and videos of several of their meetings are posted there.

I was not able to be there for a regular meeting, I need to plan these things better, but a special gathering was arranged at a lovely house in suburban Atlanta in the woods.  After a meal I gave the presentation and it was well received.

Guess this thing is long enough so I had better finish; I was about six or so miles short of my next destination when another tire on my house blew out, by now I was an old hand at such things and AAA quickly came to the rescue.  Naturally both blown tires were on the left side, where the traffic was.  The only difficulty with this blowout was that this stretch of interstate (I-26 eastbound just west of Summerville, SC) is quite busy and I had to move the unit as close to the ditch as possible so the tire could be changed without danger to the tire changer.  Every time a car or truck went past at full speed (which was ever second or so) the house would rock back and forth.  I was certainly thankful when I was safely parked in the KOA campground.

Christianity suffers under a great handicap because it has become identified in the minds of all the world as a part of the social system, the industrial life, and the moral standards of Western civilization; and thus has Christianity unwittingly seemed to sponsor a society which staggers under the guilt of tolerating science without idealism, politics without principles, wealth without work, pleasure without restraint, knowledge without character, power without conscience, and industry without morality.  The Urantia Book (2086.6) (195:10.20)