This is a short posting to give an advanced notice of our next adventure!  Betty Lou and I are going to Ireland for a South Carolina ETV Nature tour with Patrick McMillan, who does the show “Expeditions” for Public Television.  After touring Ireland we fly to London, rent a car and explore a bit of England and Wales while driving on the wrong side of the road, pray for us.  There is an interesting twist to the story that will be described at the end of this short posting.
While it is true that many men and women must assiduously apply themselves to some definite pursuit as a livelihood vocation, it is nevertheless wholly desirable that human beings should cultivate a wide range of cultural familiarity with life as it is lived on earth. Truly educated persons are not satisfied with remaining in ignorance of the lives and doings of their fellows.  The Urantia Book (1674.2) (149:4.6)

All photographs in this posting were taken with my new Galaxy S4 phone during a walk over nearby hills.

Top of the hill, one view

Due to the cold winter up north I was reluctant to venture northward too early and therefore I did not have as much time as usual in either South Carolina or the Asheville, North Carolina areas.  I am now parked for the summer near Jamestown, NY.

This walk is one of my favorites and is a 7 ½ mile power walk that includes three significant hills.  It was a fine day for going out into the countryside, listening to the birds, talking to the cows and such.  And this was the day after my 71st birthday.  It seemed as if I was stronger after the walk than I was before; I generally average about four miles an hour.

Top of the hill, view over valley

This view is about two or three miles into the walk, after a steep climb; after this the road goes into a valley and then up to a farm that can barely be seen in the picture just left of center.  Then I turn left and go down to the Hidden Valley Camping Area near Jamestown, NY. 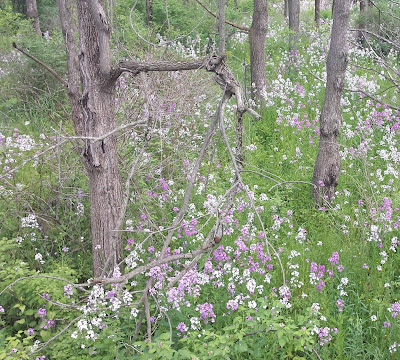 In the valley, old nut trees with wildflowers

In the valley there is an old nut orchard, I don’t know what kind, but the contrast between the old trunks and the wildflowers was interesting.  These walks over the countryside, up the hills and beside the pastures of contented cows, are part of the joy of being in this part of our magnificent creation.

As previously stated we will be going to Ireland this Saturday for the ETV tour, this is a ten day tour of the Irish countryside with a naturalist and a local guide.  After Ireland we go on to England.  Why not, since we will be in the neighborhood?  We will rent a car, explore Wales, visit Urantia Book readers, and then go on to Reading, which is west of London for a study group meeting.  For the last few days in this land over the Pond I selected a hotel that seemed nice and made the reservations.  A few days later I was looking at the hotel web site and discovered that this hotel, Runnymede-on the-Thames, was a short 25 minute walk along the Themes River from where the Magna Carta was signed exactly 800 years ago!!  It was signed on June 15, 1215 not far from the very spot where this hotel is located.  This was a monumental event in the struggle of mankind for the rule of law and for individual freedom.  To think that we could stand in the very place that this was transacted 800 years ago is beyond our comprehension.