Events are moving too rapidly to allow separate postings for each event.  There are two exciting bits of news that will be given at the end of this posting and because of them, one an event and the other a change in lifestyle, two potential postings need to be consolidated into one.  First we will complete our Irish tour by visiting the Irish countryside, a sheep farm, and the Cliffs of Mohr.  Then we fly to England, rent a car, explore south Wales, London and attend a study group meeting west of London.  And by the way we also stand on the very spot where the rule of law began exactly 800 years ago.  With such ambitious goals we had better get started!

I feel that the changes that are entering into my life are in harmony with God’s Will, and so the theme of the quotations in this posting is “Accepting God’s Will.”

Jesus: “When God’s will is your law, you are noble slave subjects; but when you believe in this new gospel of divine sonship, my Father’s will becomes your will, and you are elevated to the high position of the free children of God, liberated sons of the kingdom.” The Urantia Book (1588.5)

We rode between our various stops throughout the Irish countryside in a fancy bus with our local guide Patrick giving us the stories and history of the regions we were passing through.  He claimed this wall was at least a thousand years old and who are we to say otherwise?  It is interesting that the stones in this one are mostly flat and vertical.  It is difficult to see in this photo, but the ground behind this wall is higher than that in front, so the flat stones equalize the pressure on the wall.  Besides, there is something charming about old walls with plants growing out of them. 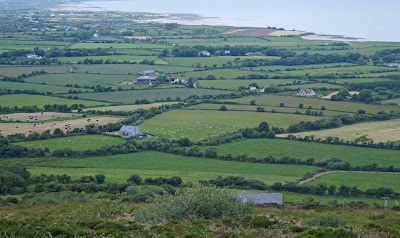 This view of the Irish countryside is typical.  The entire landscape is covered with these regular plots outlined by trees and shrubs.  The white spots in the center are sheep while the dark spots on the left side are round bales of hay that are bagged according to European Union regulations.  At one point our bus halted near a highlands region that overlooked an interesting bay.  We were informed that the movie “The Quiet Man” with John Wayne and Maureen O’Hara was filmed in that spot.

Next was a visit to a Sheep Farm, complete with a demonstration of a sheep dog in action, sheep shearing, a visit to a thatched roof cottage and a hearty lunch.  There were also some magnificent Irish Grey horses that came up close to us for attention.  The dog separated one sheep with few commands from the trainer and herded it into the holding pen where the trainer picked it up and expertly sheared it.  This sheep was only a year old and this was its first shearing but it tolerated the whole process quite well.

The road out of the farm was only one lane and another bus had to back out so we could leave since we were on the road first.  Many of the roads in Ireland are very narrow, not made for large buses and such. 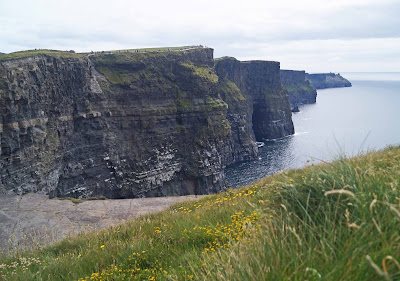 The Cliffs of Mohr are a distinctive formation on the Atlantic coast of County Clare.  At their highest point they are 700 feet high.  As we walked along the nearby cliffs it appeared that there is no guardrail along the cliff edge on the far side.  Look closely and people can be seen on the path on the far side and there seems to be no safety rail.  After exploring along the clifftop we rode to the base of the cliffs for a boat ride offshore amongst countless diving sea birds.  There was one towering rock just offshore that was covered with birds.  This was an impressive sight to behold and if I am in your area I would be glad to show more of the photos.

There were many other sights worthy of mention, but we must move on to the other part of our journey to lands across the pond. 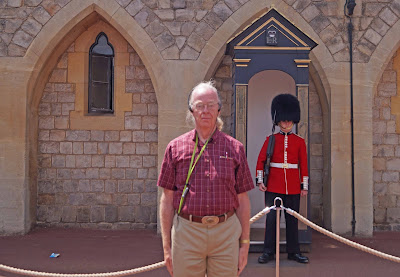 We flew from Dublin to London, rented a car and drove to Reading, which is a bit west of London.  We stayed there a couple of days to recuperate a bit and while there we took a train to Windsor to see the palace.  I suspect the guards in their bearskin hats are used to tourists hamming it up around them.  The tour of the castle was a bit overwhelming.  It was impossible for us to imagine anybody living surrounded by such opulence including vast collections of weapons, suits of armor and impressive works of art.  Thus the kings of Europe have lived for hundreds of years.

Driving on the wrong side of the road was a bit scary; Betty Lou did the driving while I nervously clung to the arm rest.  Not once did she run into anything nor did I faint.  The one thing that got us through the ordeal unscathed was that the car had GPS, who we called Grace.  Even then we twice wound up in the parking lot of the same sports complex. 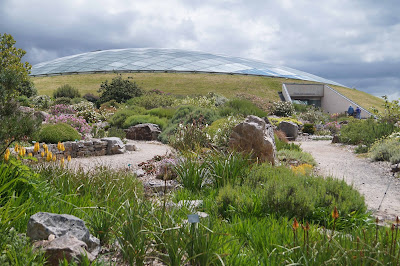 We stayed a few days near Swansea, which is on the south coast of Wales.  One day we drove west to the Welch National Botanical Gardens.  It happened to be Father’s Day and I was let in for free.  The sight was impressive with all kinds of plants imaginable.  The greenhouse shown here is the largest single span glass structure in the world.  Inside, amongst the trees and plants an orchestra was playing.  There was also a display of British Roadster autos in the parking lot.

Another day we took the bus to The Mumbles, which is a small mostly tourist town at the end of Swansea Bay.  While there we explored Oystermouth Castle, walked along the shore and had lunch at a restaurant on the boardwalk.  This was quite an adventure and we had an effortless excursion due to the efficient bus system. 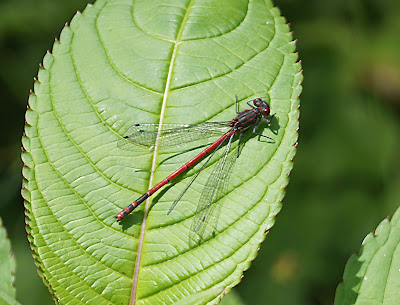 When we left Swansea we tried to find some waterfalls that we had noted on the map, but somehow we missed them.  Instead we found a lovely walking trail that went along a small stream, we returned by a higher path through the woods.  It was great to be able to walk at our own pace and enjoy the sights.  There were several Damselflies along the stream.  I also got a good photo of a pair of mating Blue Damselflies.

Our next stay was at a quaint Bed and Breakfast in south Wales.  While there we had supper at a nearby pub in Maudlam called “Angel Inn.”  From there we drove to Caerphilly, which is north of Cardif, to visit Gary and Liz.  Liz took us on a walking tour around the castle there which has a tower that leans more than the one in Pisa.  Later Gary rode with us to Reading for the study group meeting. 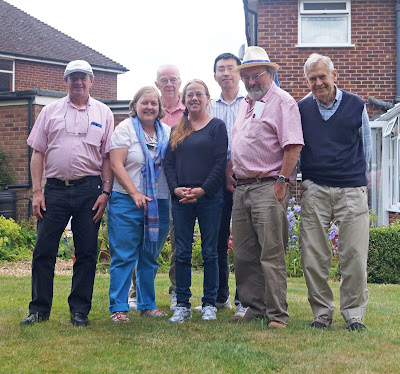 The Urantia study group was at Chris and Tina’s house in Reading and was well attended.  It was a good meeting and was conducted much the same as others I have attended over here.  There was one notable difference however, midway through the meeting the reading stopped and snacks were brought out, afternoon tea no less.

From Reading we drove to Heathrow, said goodbye to Grace and thankfully turned our car in without incident.  For our last days in England I chose a hotel on the River Thames; after making the reservations I was looking at the hotel web site and learned that a twenty minute walk away is the very spot where the Magna Carta was signed exactly 800 years ago.  We stood on the very place within a week of the exact anniversary. 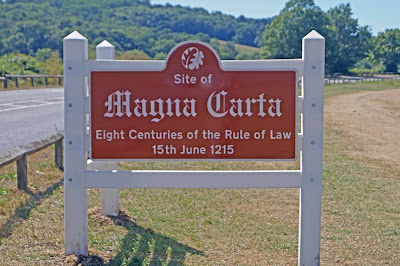 Where the Rule of Law Began

Both of us had picked up a nasty British virus so we were not eager to play tourist in London.  What we did was to take a train into the city, get on a double decker bus and take the full ride, about two and a half hours.  We could have gotten off to visit various places of interest, but we were not so inclined.  Nonetheless it is an efficient way to see the city and many of its sights.

Now for the news.  First Betty Lou and I will be attending the Parliament of the World’s Religions in Salt Lake City later this month along with other UAI brothers and sisters.  There will be thousands of people of faith from all over the world in attendance.  The list of speakers includes Dr. Jane Goodall, many Nobel Prize winners and other notables of faith.  The Dali Lama was to be the main speaker but he had to cancel.  The second bit of news is that Betty Lou and I are looking to purchase a house in the Asheville, North Carolina area.  Just today we learned that the seller has accepted our offer and the process begins.  We plan to continue to visit our fellow Urantians and other places of interest.  The specifics are still uncertain but we do plan to travel somewhat once we get properly settled in.


The doing of the will of God is nothing more or less than an exhibition of creature willingness to share the inner life with God — with the very God who has made such a creature life of inner meaning-value possible.  Sharing is Godlike — divine. God shares all with the Eternal Son and the Infinite Spirit, while they, in turn, share all things with the divine Sons and spirit Daughters of the universes.  The Urantia Book (1221.2)

All photos are by Doug Cable