I am now parked at the KOA in Ladson, South Carolina.  Since the last report I moved to Natural Bridge Virginia for a visit with Dick and his family at his new house.  Next I moved to Newport Tennessee, which is about 45 miles east of Knoxville.  I made reservations at a KOA campground for two weeks hoping to do some hiking in the Smoky Mountains but the politicians closed them down.  I did get in a good hike along a forest service road and drove over a really wiggly road into North Carolina.  There was also an enjoyable meeting with the Knoxville study group.  Then I moved to Joanna South Carolina for a brief visit and on to Ladson, which is not far from Charleston.  I expect to be here a month or so.

In honor of our glorious politicians the quotes in this posting deal with government and its relationship to society.  We truly get the government we deserve, therefore if a society is dominated by individuals who are selfish and not especially bright then the government will have similar characteristics.  It cannot be otherwise.

The following quote describes Rome in the second century after Christ but it also describes our own civilization today.  These conditions are cited as one of the reasons that Christianity was able to spread so rapidly during this period.  Perhaps today there is another religion waiting to revitalize us, one based on the full teachings of Jesus.  This is something to consider.

“Even a good religion could not save a great empire from the sure results of lack of individual participation in the affairs of government, from overmuch paternalism, overtaxation and gross collection abuses, unbalanced trade with the Levant which drained away the gold, amusement madness, Roman standardization, the degradation of woman, slavery and race decadence, physical plagues, and a state church which became institutionalized nearly to the point of spiritual barrenness.”  The Urantia Book (2074.4) (195:3.9) 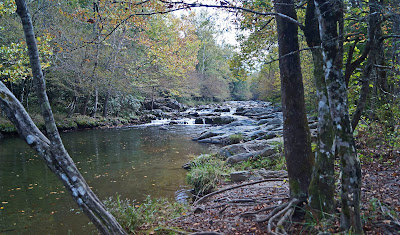 The move to Virginia was fortunately uneventful; I stayed only a couple of days and moved on after visiting Dick and his family.  The move from there to Newport Tennessee was also uneventful, but a couple of days later there was a terrible accident just up I-40 from where I got off.  A church bus had a blowout, crossed the median and several people were killed.  I had traveled the same section pulling my house on wheels just a day or two earlier.

The KOA campground I was parked at was pleasant and had an enjoyable area for my power walk.  The only downside was the nearest decent grocery store was over thirty miles away. 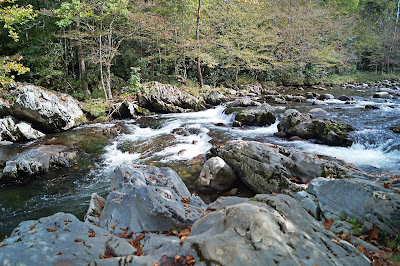 Little Pigeon River
One day I set out hoping to be able to walk in the woods but when I arrived at the Greenbrier entrance to the park the gate was closed and locked; thanks politicians!  There was however a small parking area just outside the gate and a forest road that ran alongside a small creek that was importantly called the Little Pigeon River.  According to Wikipedia there are three divisions and this was the Middle prong.  This river is not a tributary of the nearby Pigeon River.

The leaves had not yet started turning color but it was a fine day to get out and explore.  Several families and couples were taking advantage of the opportunity and enjoying the fresh air and peaceful surroundings.  Even though not many leaves had turned color, enough had fallen to make the forest road interesting because there was no traffic or wind to blow them away.  Since most of the trails started several miles up the road I did not get on one but it was a great day nonetheless. 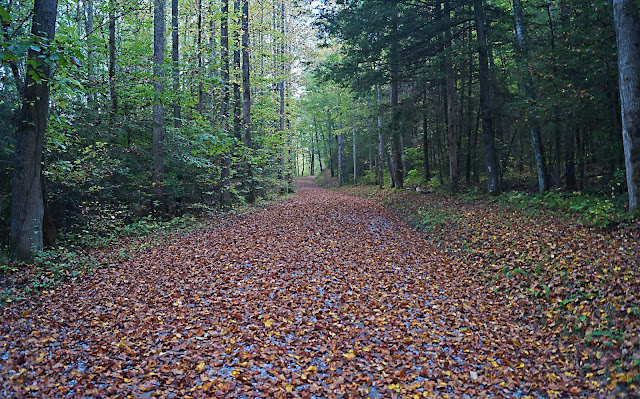 On the way back as I was approaching the Monster (the F-350 dually truck that pulls my “house on wheels” when I move), a family was looking at it and pointing.  I thought they must have really liked it and I was eager to go up and point out its finer features to them.  However by the time I arrived they had moved on and I saw what they were pointing at.  There is a bar along the bottom of the truck that I step on to enter, in the old days it was called a running board but I have no idea what they are called these days.  Anyway at the front of this bar there was a small brown stuffed dog.  I have no idea how he got there.  He was clean, dry, new and obviously needing a good home.  How could I leave him all alone in the woods?  I call him Greenbrier or GB for short and he rides in the Monster with me.


Another day I drove to Cosby; last fall I hiked from the Cosby Campground to Hen Wallow Falls and I wanted to explore the region a bit more.  Again the park was closed; it did not reopen until I left the area.  I kept driving along that road, State 32 toward North Carolina.  It was a narrow twisting road that climbed up the mountain.  I imagine it would be fun driving it in a fancy sports car with the top down, zipping around the sharp turns.  However, the Monster is not a sports car!  As I approached one sharp turn a lady came running out into the road waving her arms.  She said she lived nearby and had left the dome light on in her car and the battery died; she asked if I had jumper cables.  I said no, but parked in the middle of the road talking with this Mountain Momma for a while before moving on.

I found out later that the Appalachian Trail crossed the road at the state line.  In North Carolina this highway became a one-lane dirt road called Mt. Sterling Road.  This part was even steeper and the turns were sharper.  The first hairpin turn was so severe that I had to back up a couple of times to make it around the turn without tumbling over the edge. 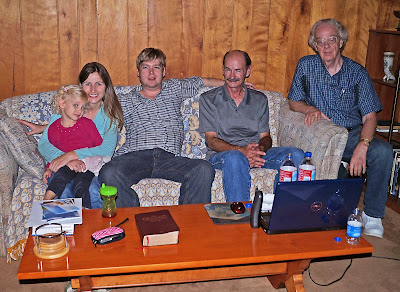 Ava, Beth, Eric, Bill, Wandering Urantian
I arranged to meet the Knoxville group at Calhouns on the River.  This restaurant is near the University of Tennessee football stadium and is apparently a favorite of the football fans and players.  On occasion this study group goes to the Asheville meeting but that is a long drive; in fact I had met the members of this group there last spring.  At the study group meeting after our dinner I gave my presentation, “The Urantia Book and Perfection Hunger,” and it was well received.  We also read part of Paper 56, “Universal Unity.”  Perhaps I will return there in the spring.

The move from Newport to Joanna, which is about 45 miles southeast of Greenville, went well enough.  The first part covered I-40 east over the mountains, which is a beautiful drive when it is not blocked by a rockslide; at the higher elevations the leaves were turning color nicely and it was an enjoyable sight.  That is, it was enjoyable until a few miles short to my exit to I-26 east where the traffic was backed up and the going was slow for over a half hour until we got past an accident; apparently a pickup became disconnected from the camper it was pulling and the scene was still being cleaned up when I passed.  Since this was a short move this delay was of no consequence.

“The political or administrative form of a government is of little consequence provided it affords the essentials of civil progress — liberty, security, education, and social co-ordination. It is not what a state is but what it does that determines the course of social evolution. And after all, no state can transcend the moral values of its citizenry as exemplified in their chosen leaders. Ignorance and selfishness will insure the downfall of even the highest type of government.”  The Urantia Book (803.1) (71:3.1)

The last two sentences need repeating.  “And after all, no state can transcend the moral values of its citizenry as exemplified in their chosen leaders. Ignorance and selfishness will insure the downfall of even the highest type of government.”  Seems like we all have work to do!