#13: My pilgrimage to the Education for Outreach Conference in Boulder Colorado was a thrilling and high energy experience. Friday and Saturday’s meetings started at 9:30 AM and were not over before 10:00 PM. Thursday there were sessions in the afternoon and evening while on Sunday there was a morning session. In addition, on two mornings I got up early (leaving at 4:30 AM!) and went with Don Ware as he watched for birds and I soaked in the wonderful sights and got some great photographs, see below. The presentations at the conference were inspiring, interesting and informative, the discussions were lively but the most inspiring moment was experienced after the conference was over in the motel where most of us stayed.

Today’s quote is the last paragraph in the book.

"And God-consciousness is equivalent to the integration of the self with the universe, and on its highest  levels of spiritual reality. Only the spirit content of any value is imperishable. Even that which is true, beautiful, and good may not perish in human experience….. And all these things are a part of the Universal Father. The Father is living love, and this life of the Father is in his Sons. And the spirit of the Father is in his Sons’ sons — mortal men. When all is said and done, the Father idea is still the highest human concept of God." Urantia Book (2097.3) (196:3.35) 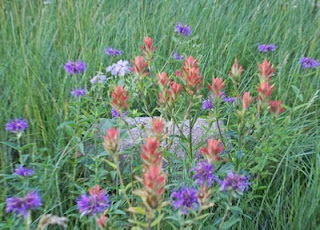 The above photograph gives only a small hint of the wildflowers, there can be no photograph of the experience of being out in His wondrous creation at dawn with the birds singing, the newborn day illuminating the hills and the wildflowers like gems in fresh green fields.

Saturday afternoon the featured speaker was Dr. Lyone Fein who is an Assistant Professor at Denison College in Ohio. She teaches a course on comparative religion, the last segment of which studies the Urantia Book; hers is the only course known to include such a study. In her presentation and later discussions she employed a rigorous scholarly approach which was certainly appreciated. There were also discussions about how to approach local colleges and universities in outreach efforts.

Friday there were presentations by representatives from the Urantia Foundation, the Urantia Fellowship, UAI and others highlighting outreach efforts. The announcement that most interested me is that there are plans to soon open a comprehensive online listing of study groups which will include all sources. That would be helpful to me in finding groups as I Wander.

Friday evening Roger Basset gave a fascinating account of his work with the image on the Shroud of Turin. As an artist he studied this image until he is able to perceive it as a three dimensional image. He has used computer processing to enhance this image and the result is stunning. Copies of the print are available from the artist (contact me for details). 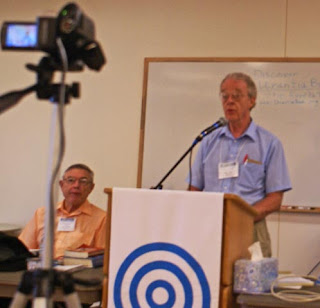 Saturday there was a panel discussion titled “Booths, Multimedia, and Other Bold Maneuvers” which included yours truly. Since I was not a booth or a multimedia I suppose they thought I was a bold maneuver. My presentation was about ten minutes long and was well received, thank you everyone. I may post it on this blog when I figure out how.

Sunday after the conference was over I was sitting in the lobby of the motel with Don waiting for someone to join us for supper. While waiting we asked the young lady working behind the motel counter if she would get a copy of the Urantia Book. We had previously spoken to two of them, who were probably twenty-something, about the revelation. She said they already spoken to the motel owner about getting two copies for the small library at the motel. When we asked her why she replied that our group was the happiest group they ever had and she wanted to read the book and find out why. They recently had another group on spiritual retreat staying with them and some of them were really grumpy. Our group was the happiest group they had ever seen. That story sums up the conference quite well. 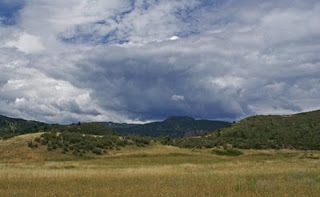 I delayed going back to Southwestern New York State by one day so I could get a short look at the mountains. I was privileged to accompany Dr. Fein as we took a hike and also drove into the mountains. Even though it rained in the afternoon it was still a great day.

Next week I fly to Charleston South Carolina to meet with our Summerville group so we can go to Boone North Carolina for Michael’s birthday, stay tuned to this station for updates!
Posted by Doug at 12:57 PM No comments:

#12:   I have just returned from Boulder Colorado where I attended the Education for Outreach Conference which was sponsored by UB the News. It was a thrilling experience to be a part of it, even though I had to give a speech! A further description of the conference will have to wait until next time as the last blog left the canyon tour short of the best part, having just left Bryce Canyon. Starting with this blog I will include a quotation from the Urantia Book in each posting.


"To assume that the universe can be known, that it is intelligible, is to assume that the universe is mind made and personality managed. Man's mind can only perceive the mind phenomena of other minds, be they human or superhuman. If man's personality can experience the universe, there is a divine mind and an actual personality somewhere concealed in that universe." Urantia Book (30, 6) (1:6.7)
I am starting to research a report dealing with the mind based on the Urantia Book, if I can put it all together, it will be quite interesting and address concerns some have about the revelation. Now, back to the tour. 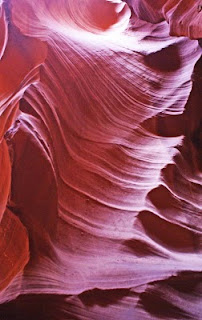 The next stop after Bryce Canyon was at the Glen Canyon Dam, which was OK if you like dams. After we arrived at our motel we had a bumpy ride in a Jeep with hard seats to Antelope Canyon which is a slot canyon, deep and narrow. The light was not good and getting pictures was difficult, but the above picture gives an idea of the textured limestone walls which in many places look like cloth curtains. 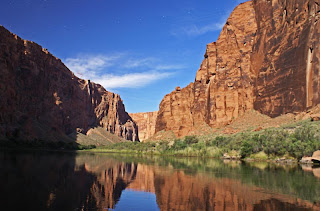 The next morning we floated down the Colorado from the base of the dam to Lee’s Ferry which is just above the rapids. This was one of the highlights of the trip. As the photograph shows, this was a magical time on the river. Midway through the peaceful floating excursion we stopped to view some old Anasazi cliff drawings at the base of the canyon walls.

One last stop before the Grand Canyon was at the Navajo Bridge across the Colorado where California Condors were in flight. They have a wing span of ten feet and are spectacular birds. One of the Wildlife Biologists watching the birds had her thumb in a thick bandage; apparently while handling the birds one decided to take a nip. Not everyone gets bitten by a California Condor while still alive! 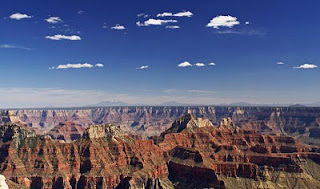 The north rim of the Grand Canyon is so overpowering that there are no words for it, the picture cannot begin to portray the majesty of the view. One individual person can become swallowed up in the immensity, a vast arena of sculptured walls and canyons. 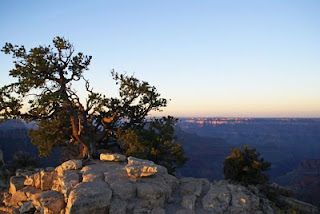 The next morning I started before dawn and walked to Bright Angel Point; I thought I was OK with heights, but this walk was a bit scary, the path was no more than four feet wide and dropped off sharply on both sides. The view of the first rays of the sun on the canyon walls is something to remember for a lifetime. It was almost magical to watch the shadows and colors shift and change as the sun slowly rose higher. While I was watching the light show I overheard two photographers talking nearby. One said he had a good vantage point but then “Those people from South Carolina ETV came by and made a lot of noise.” When I told him I was on that tour he did not seem happy.

From there we went to Sedona Arizona for the last night and on to Phoenix for the flight back to our mundane worlds. I only took about 1200 pictures on the tour, digital pictures are such fun!

Hopefully I will get out another blog soon telling about the Boulder Conference. I think I will be going to North Carolina for Michael’s Birthday and will tell y’all about that also.
Posted by Doug at 5:44 PM No comments: