Since our last posting Betty Lou and I went on a brief honeymoon into the Smokies and a couple months later took a trip to Waverly, NY for a Urantia Book mini conference.  These journeys were restful and interesting as we report below.  One reason this posting has been a bit delayed is that I am writing a book.  At first I thought it would be another short booklet but it kept growing and growing until it is currently well over 90 pages and I doubt very much that I am anywhere near half way through it.  There is a brief excerpt at the end of this posting.  I plan to include more snippets of it in future blog postings.

The title of the book is “Light of Truth” so this is the subject of our quotation.

[M]aterial-minded sons in darkness will never know of your spiritual light of truth unless you draw very near them with that unselfish social service which is the natural outgrowth of the bearing of the fruits of the spirit in the life experience of each individual believer.  The Urantia Book 1930.1 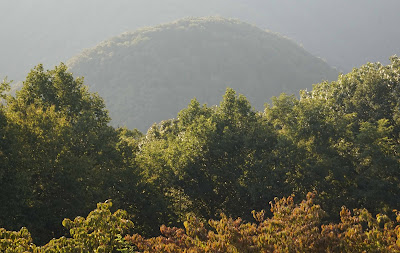 Hilltop bubbling up in the background, Pipestem Resort, WV

Just before our trip north for the mini conference I got a new camera, the old one having deceased unexpectedly.  All photos in this posting are from that journey.

For our honeymoon we went to Newport TN, which is on the other side of the Smokies from our home.  We both love this part of our great land so it was a natural decision to explore a bit more of this region.  We stayed there a few days and drove to various areas of interest on day trips.  One day we drove to the Greenbrier entrance to the Park and then went several miles on a narrow unpaved road deep into the woods.  There was a picnic area at the end of the road and nearby was a peaceful rock filled stream.  The best part was the slow drive through the peaceful woods, just enjoying being in that place. 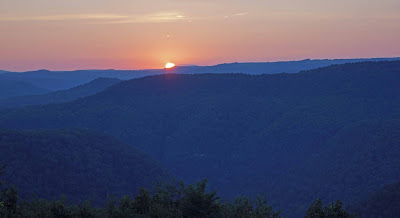 Sunset in the Appalachians

Another day we drove to Cade’s Cove.  From there we took the Rich Mountain road toward Townsend.  This is a narrow one way path over Rich Mountain gap that is 1959 feet, nearby is Cerulean Knob that is 3686 feet high.  We were about halfway up to the gap and had parked to look around when a trio of bear cubs came down the hill toward us followed by momma bear.  We naturally stayed in the car and the bears went behind us.  When momma came around the car and started walking toward the front of the car it was definitely time to move along.  She was not the least but threatening, just curious.

When we are at our home in Poplar Cove there always seems to be something that needs doing.  We have not explored many sights of interest near our home for this reason.  Therefore we stay in the Smokies when we have a chance to get away, far enough to be free of home duties but near enough so that we remain in our ever glorious Smokies. 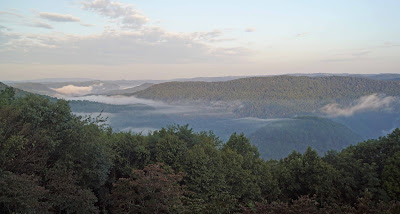 Morning Fog in the Valley

For our journey to Waverly, NY, which is a bit west of Binghamton, we stayed in the Appalachians the entire time.  Our first night was in Pipestem Resort State Park in West Virginia.  This park is not far from the New River Gorge Bridge on US 19, which is the bridge where idiots bungie jump into the gorge.

Our room had a small balcony overlooking the countryside; the first three photos were taken from it.  The next morning right below our balcony was a doe, two fauns, a yearling and a buck.  The deer family stayed for some time and soon people started throwing pieces of apple from their rooms out to the deer.  The doe chased the buck and yearling away so she and the young ones could eat in peace.  Her ribs were showing and she looked hungry.

There was also time to take a leisurely walk in the woods before we headed northward again.  In the photo below I was somehow intrigued by this large stone with lichen growing on it.  Is there anything better than a quiet stroll amongst the trees, rocks and creatures of these hills? 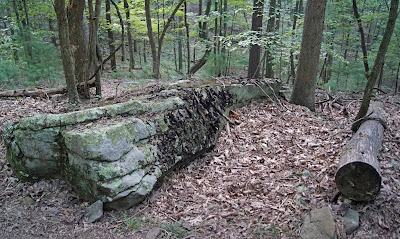 Just a Walk in the Woods, WV

The theme of the mini conference in Waverly was “Angels, Our Living Ladder from Chaos to Glory.”  It was based on the Urantia Book International School (UBIS) course of the same name.  Since we will have many types of angels helping us along the way, starting here and going with us all the way to Paradise, this is a vital and fascinating topic.

The conference (and the UBIS course) was divided into four parts.  The first part dealt with angels of the central universe, which included Paper 26: “Ministering spirits of the central universe” and parts of Paper 27 “Ministry of Primary Supernaphim.”  These are the angels who will guide us through our final preparations to travel to Paradise and personally meet the God of all creation.  One of the concepts we learned in this section is that God has commanded us to become perfect as God is perfect.  He would not ask to do something that is impossible.  Therefore this means that it is possible for each of us to become perfect by means of each decision we make.  At each step along the way we can chose to move toward perfection and become more like God, becoming eternal beings, or we can chose to become less and cease to exist.

The second part studied Paper 28, “Ministering spirits of the superuniverses.”  These are the angles who guide and teach us as we come near the close of our period in the superuniverses of time and prepare for the central universe of eternity.  One of the truths we learned in this period was the sequence that must be followed for mercy to have any validity.  The first step is that we must be just, do what is right.  Mercy without justice is cheapened and is without substance.  Next comes fairness, if we are not fair then mercy will be tainted with favoritism.  Then comes kindness, mercy is all about kindness, expressing our love for our sisters and brothers.  We must first be just, then fair and then kind before we can display mercy.  Only after this is mercy sincere without being condescending.

(This is the campground where I spent seven summers.  It is nestled in a valley in southwestern New York State not far from where I grew up.  This time we stayed in a charming camper that was built like a little cabin instead of my fifth wheel, which we traded in last year.  The small white sign says that the speed limit in 6 3/8 mph; since my power walks are only about four mph I stay well within the limit.  While we were there I was able to do a couple of power walks in the countryside and over the hills.  This is familiar territory.)

The third part of the mini conference covered Paper 38 “Ministering spirits of the Local Universe” and Paper 39 “The Seraphic Hosts.”  An interesting insight in this period was that these angels were created as equal beings but upon testing they were found to have different abilities.  Even though they were initially assigned duties in line with these abilities, many studied so that they could perform other tasks.  They work hard to become better, more proficient and more useful.  So should we.

The final part dealt with Paper 113, “Seraphic guardians of destiny.”  These are the angels who are always with us, starting now during our life in the flesh and continuing with us all the way to Paradise.  They truly are our best friends forever.  This is certainly a true forever as in throughout all future eternity, not just a single lifetime on Earth.  We learn here that everyone has a guardian angel.  Individuals who are not well advanced spiritually will be in groups having from a thousand down to only five individuals.  Each group has its own guardian (they work in pairs, so this will actually be a pair of angels) while more advanced individuals will have personal guardian angels.  We are certainly not alone in the universe.  At all times we have unseen friends assisting us. 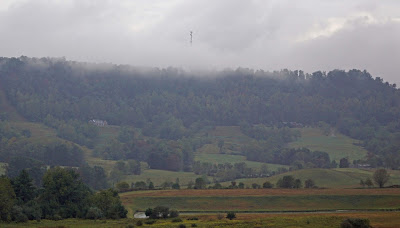 This was the view out the window of our room in Flatwoods, WV on our southward journey.  It was interesting how the cellphone tower kept peeking in and out of the morning fog.

The title of the book I am working on is “Light of Truth” and it is an examination of the consequences of actions by those who were entrusted with bringing truth to our planet beginning in the distant past and continuing to the present day.  The following passage is from the book’s Prolog.

A dark place.  Shadows with darker shadows behind and shadows darker still behind those.  Shapes are moving in the dim light like arms reaching out toward us, grasping.  What is this place?  Is this a dream? A nightmare?  Could this be reality?  What is this place?

A dim, pale yellow light appears in the distance, subtly growing in intensity.  Soon we can perceive our surroundings more clearly.  We see healthy trees with branches and leaves moving in the gentle breeze.  We see lush green grass growing beneath the trees and a curving path of small white stones winding amongst the trees, going toward the distant light.  This light enables us to have the proper perspective to better understand our surroundings.

From whence comes this light?  Who has brought this light to us?  How can each of us move into this light and obtain increased clarity?

The light represents the Light of Truth, which helps us learn about both the material and the spiritual environment in which we live.  Truth expands while we mature as individuals and as a society.  Truth evolves as we evolve, for example ancient magic gave birth to modern science.  Primitive minds were filled with ignorant superstition until science gradually grew.  Today, Urantia is in the twilight zone of this intellectual evolution. One half the world is grasping eagerly for the light of truth and the facts of scientific discovery, while the other half languishes in the arms of ancient superstition and but thinly disguised magic.  The Urantia Book 973.1

Stay tuned for more quotations from the upcoming book.