#37:  I have safely returned from a glorious journey to one of the most spectacular regions of our beautiful planet.  As mentioned in the last posting, the South Carolina Educational Television Endowment sponsored the trip, which was led by the naturalist Rudy Mancke; there were a total to 50 on the tour, a full busload.  In fact, after the first day’s outing our driver, Pete, had to get a more powerful bus for getting over the mountains.  At one point we were nearly at 10,000 feet.  From our base at Reno, Nevada we explored Lake Tahoe, Pyramid Lake and Donner Pass, which is about all there is space for in this posting.  Next time I will describe our excursion into Yosemite Valley and the Mariposa Grove.


“When it is not possible to worship God in the tabernacles of nature, men should do their best to provide houses of beauty, sanctuaries of appealing simplicity and artistic embellishment, so that the highest of human emotions may be aroused in association with the intellectual approach to spiritual communion with God. Truth, beauty, and holiness are powerful and effective aids to true worship….  The child should be introduced to worship in nature’s outdoors and later accompany his parents to public houses of religious assembly which are at least as materially attractive and artistically beautiful as the home in which he is daily domiciled.”  The Urantia Book (1840.5) (167:6.6) 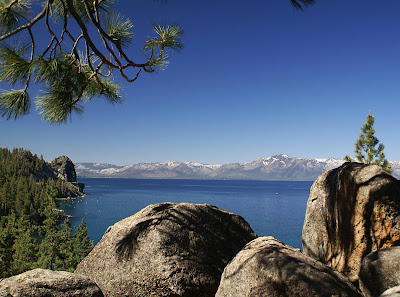 
Our naturalist, Rudy Mancke, previously did a nature program on Public TV called NatureScene and these tours are like being inside such a program as he gives commentary on the geology, wildlife and natural history of the regions through which we are passing.  On the first day we went to Lake Tahoe, which is a beautiful sight, the water is clear and deep blue with regions of green.  We boarded a boat for a ride across the lake to Emerald Cove, so called because of the color of the water.  The entire way over I stood in the bow of the boat taking in the sights and clicking pictures.  The problem with that was I got a dandy sunburn on my forehead and I neglected to go inside for lunch until it had been pretty much picked over.  That was fine with me, I can eat any day but sights such at these are once in a lifetime.  On the way back I put on the telephoto lens and got a picture of two Ospreys in flight together.  There is not enough space here for all the interesting pictures from the excursion.


This day we also visited Virginia City, famous for Boot Hill and because Mark Twain was a newspaper reporter there when he started to receive attention for his writing.  We did not stop at Boot Hill, but from a distance it looked as it did in the movies.  In the town there were the wooden sidewalks and tourist places but since it was a very hot day I headed for the ice cream parlor for a dish of Butter Pecan.  While I was finishing it I discovered an interesting old church one street away from the tourist shops, Saint Mary’s in the Mountains Catholic Church, inside the pews each had a numbered door. 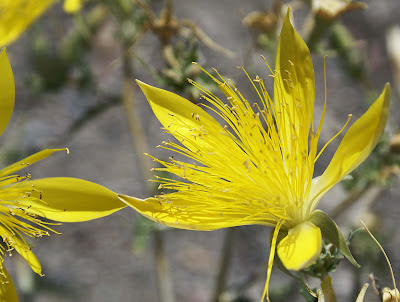 The next day we stopped at a Paiute Indian reservation near Pyramid Lake where an Indian guide gave an account of the history of the area and his people.  John C. Freemont had named the lake after he spotted a conical island in it.  By the way, Lake Tahoe drains into the Truckee River, which flowed past our Reno Hotel; I could even see it from my room there.  The Truckee then flows into Pyramid Lake, which has no outlet; the water just evaporates.  This lake has distinctive formations called Tufa that are formed by carbonate minerals precipitating from the water.  We then went closer to the lake where we had our box lunches and did some exploring.  There were swift lizards scurrying about in the sand and a Mule Deer on the other side of the lake.  The above flower was growing along the path. 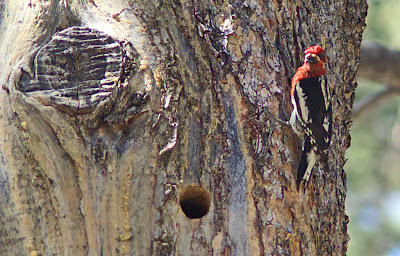 Our next stop was at Donner State Park, the site where the Donner Party got stranded by the snow in 1846.  As we began our nature walk, not far from the visitor’s center there was a Red Breasted Sapsucker feeding her young, we stood for some time watching and taking photos.  It is remarkable the precision with which the nest was formed.  I have one picture where the bird is just coming out of the hole and it looks to be a tight fit.  On our walk we saw a Mourning Cloak butterfly, a very large toad and other interesting sights. 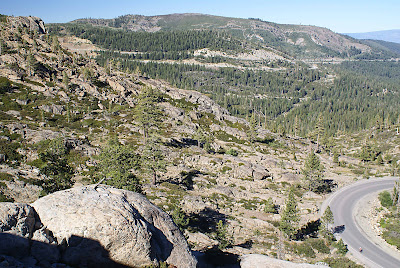 I will not go into the tragic details of the Donner Party; if you are interested Wikipedia has a full account of the story.  The gist of the tale is that the party arrived at this pass as the snow started falling.  They got up the pass and tried to build shelters, but the snow that year became 22 feet deep and food was scarce.  The question becomes: How could those people endure such hardships, how could they drag their wagons and all their possessions up slopes such as this?  How could they persevere?  The answer is simple, they persevered because they had to; they solved their problems because they had to.  It was truly persevere or perish.

“All this must be according to the Father’s plan, which has predicated finite progress upon effort, creature achievement upon perseverance, and personality development upon faith. ”  The Urantia Book (1266.3) (115:7.2)