# 36:  Last time I was unable to complete the description of my journey northward so here I am again.  Since the last posting I met with a vibrant group in Asheville, North Carolina and with Scott and Lynn in Columbus, Ohio.  That leg of the journey northward was somewhat more “interesting” than I care for, but I arrived safe and sound.  On Memorial Day I had a fun flight in a small two-seat plane piloted by my cousin (who is 80).  During that flight I was able to take interesting pictures, including one of the campground where my “house on wheels” is parked.  My next trip will be on June 18 when I fly to Reno (not on the same plane!) for an excursion with Rudy Mancke and the South Carolina ETV Endowment tour; details will be in the next blog or two but the highlights include Lake Tahoe, Yosemite National Park and the Mariposa Grove.

“Mathematics asserts that, if one person stands for a certain unit of intellectual and moral value, ten persons would stand for ten times this value. But in dealing with human personality it would be nearer the truth to say that such a personality association is a sum equal to the square of the number of personalities concerned in the equation rather than the simple arithmetical sum. A social group of human beings in co-ordinated working harmony stands for a force far greater than the simple sum of its parts.”  The Urantia Book (1477.1) (133:5.6) 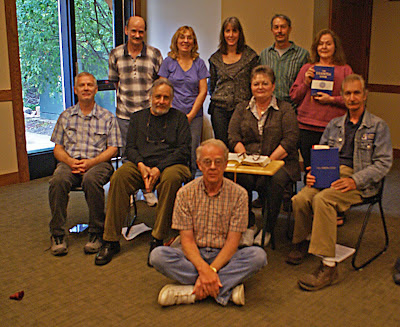 Asheville study group, unfortunately I did not get everyone’s name.

I parked my “house” in Marion, North Carolina, just a bit east of Asheville.  The study group in Asheville meets one Saturday each month in the library.  As shown in the photo, it was well attended and it was an excellent group.  Two members, Steve and Regina attended our group in Summerville, South Carolina in the mid 1990’s.  This meeting we read Paper 64, “The Evolutionary Races of Color” as well as part of the next paper, “The Overcontrol of Evolution.”  The discussions were interesting and related to the material we were reading.  These interactions are always invigorating; unfortunately they go so fast it is not possible to properly describe them and the energy experienced at the time.  After the meeting we all went to Asheville Pizza and Brewing on Merrimon Avenue, which is just down the road from the library.  A pizza and a plate of interesting dips appeared, along with corresponding beverages.  The talk was lively, bouncing around the table.  This was truly an unforgettable experience and it was 6 PM before I left, four hours after the meeting started in the library.  What a day!

The move from North Carolina to just west of Charleston, West Virginia was not one of the more pleasant moves I have made.  It was raining most of the way and the scariest moment came as I was travelling east on I-40.  I was approaching the I-77 interchange where I wanted to go north when all of a sudden the traffic came to a dead stop.  The only way I was able safely to stop in time was because the tractor-trailer in front of me got off on I-77 south.  The traffic moved just barely enough to allow me to go over the edge of the highway a bit and head north on I-77.  On that day I saw seven cars at various places that were off the road in the grass.  More than one was still running and had people in them.  I saw no accidents, but that was quite enough, thank you.

The next day’s move to Columbus, Ohio was thankfully less exciting.  The evening I arrived Scott and Lynn came to my “house” and we had a meeting with just the three of us.  We talked about my travels and read part of Paper 159, “The Decapolis Tour,” particularly section 4, “The Talk with Nathaniel.”  That is where he asked Jesus to tell him how to know the truth of the scriptures, how to tell which ones to accept and which ones not to accept.  I also showed them my presentation, “The Urantia Book looks at capitalism.”  They were polite but it needs a lot more work.  Since there were just the three of us I did not take a picture of the meeting.

I arrived at the Hidden Valley Camping Area without further incident and my “house” was parked by one of the campground owners.  No, I have not yet mastered the fine art of backing up. 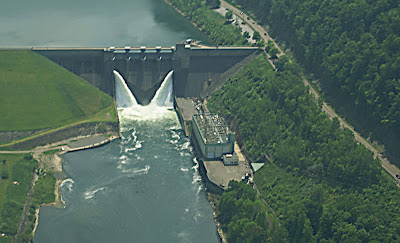 One highlight of the summer so far was a flight in a small two-seat airplane shown in the photo on the left side of my blog page.  We flew from Jamestown, New York to Bradford, Pennsylvania, a distance of about 40 miles.  Along the way we passed over the Kinzua Dam, which is one of the largest dams east of the Mississippi River; it has a maximum height of 179 feet.  When it was built in 1965 it flooded the small town of Kinzua where my mother lived as a girl.  In fact I remember as a teenager riding over the hills to visit the cemetery there where her parents were buried.  Before the dam was completed the cemetery was moved to Bradford.

The reason we flew to Bradford was because it was about the right distance and there were interesting sights along the way.  Just as we touched down on the runway at the Bradford Airport I looked out the window on the other side of the plane and there was a male turkey on the edge of the runway strutting and spreading his tail feathers.  I would have appreciated it if he would do his courting a bit farther away from our landing spot.  Nevertheless the landing was safely executed.  We had hoped to get lunch at the restaurant in the airport, but it was closed for the Memorial Day holiday.  So we stretched our legs a bit and headed back.  Just before we got back in our plane, a biplane with an open cockpit landed; it is used for sightseeing tours.

On the way back we flew over Warren, PA and followed the road to the campground where my “house” is parked.  While the plane flew a couple of circles around the area I was able to get good pictures.  In the one above, if you follow the road going upward that is a bit right of center my parking spot is behind the trees on the left side of the road near the top of the photograph.  Now that you all know where I am, come on up and see me sometime, just not all at once please.

“We all know the direct course to pursue to find the Universal Father. You are not able to comprehend much about the divine residence because of its remoteness from you and the immensity of the intervening space, but those who are able to comprehend the meaning of these enormous distances know God’s location and residence just as certainly and literally as you know the location of New York, London, Rome, or Singapore, cities definitely and geographically located on Urantia. If you were an intelligent navigator, equipped with ship, maps, and compass, you could readily find these cities…. Provided with all the necessities for the journey, it is just as possible to find the personal presence of God at the center of all things as to find distant cities on your own planet.”  The Urantia Book (118.5) (11:1.3)