#10:  I am now safely parked at my summertime spot in Southwestern New York State at the Hidden Valley Campground outside of Jamestown (stop by and see me!). The journey from Dade City Florida to Louisiana to South Carolina and on to New York State has been fabulous. I am working on a slide show of the trip which I hope to post on the web; how soon I post depends on how fancy I get with it. It has been a great pleasure to meet wonderful people at each stop. In a bit over a week I will leave the Monster and the Wyoming behind and fly out west to participate in South Carolina ETV’s “Grandest of the Canyons Tour.” This includes Brice Canyon, Zion and two nights at the north rim of the Grand Canyon!

Before I talk about the last stage of the journey northward there is more news. At the end of July I will be participating in the “Education for Outreach” conference in Boulder Colorado (for information see Conference Info); I have even been invited to be part of a panel discussion at the conference. To prepare for this I would appreciate it if anybody could send me suggestions for outreach activities. I recently had business cards printed which have my contact information, a picture of the Wyoming fifth wheel, and a picture of me with the caption “The Wandering Urantian.” I was at H & R Block in Summerville South Carolina getting my taxes done and another tax preparer overheard me talking about New York State; on my way out he told me that was his home state as well as his wife’s. I gave him my card and he promptly asked what a Urantian was. After a brief discussion I offered to give him a copy of The Urantia Book which he accepted. My next trip through South Carolina I will call him and ask how he is doing with it. This appears to be a natural way to introduce the topic, it is then up to our Thought Adjusters to motivate the individual to pursue the opportunity.

From South Carolina I went to Hendersonville, North Carolina; the journey was uneventful, though I had to wash out my mouth with soap when I got there. The parking spot at the Jaymar Campground was neat, it was the most perfectly level site I ever had and it is well situated to explore the mountains. About the soap, I have a small glass that I pour mouthwash into which I placed in the bathroom sink along with a soap dispenser while I moved from Ladson South Carolina. The next morning I thought the mouthwash tasted a bit soapy and discovered a large glob of soap in the bottom of the glass.

While in Hendersonville I went to Chimney Rock State Park and also drove along the Blue Ridge Parkway though the Smokey Mountains. I did not receive an answer to my email asking for a list of readers in the area so there were no meetings though I found out later there are readers in nearby Ashville. Possibly I can connect with them on another journey.

The drive on the Parkway was spectacular and the weather was perfect also I was able to take scenic walks. It is difficult to see in this picture, but in several places the hillsides were green at the bottom and brown at the top because the leaves were not yet out at higher elevations. 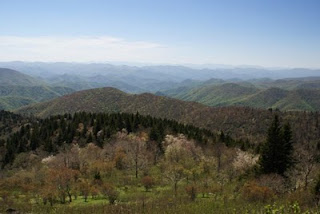 From Hendersonville I went to a campground near Natural Bridge Virginia so I could visit Dick Bain and his group in Lynchburg. The drive to Lynchburg was an enjoyable 30 miles over the mountains. The first day I was there Dick gave me a tour of Lynchburg, including some well restored old houses and the local museum.

Other days I hiked around Natural Bridge and drove the Blue Ridge Parkway, this time in Virginia. The Bridge was an interesting sight, but I most enjoyed the walk in the woods; also the butterflies posed nicely for me, though I suspect this pair is doing more than just posing. 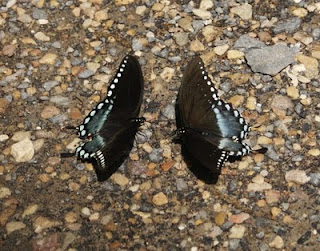 I made one more trip to Lynchburg for their discussion group. They had a meeting the week before so not all members could attend this one. We read paper 113, “Seraphic Guardians of Destiny,” and also discussed my chart of the stability of elements vs. atomic number which I mentioned previously. 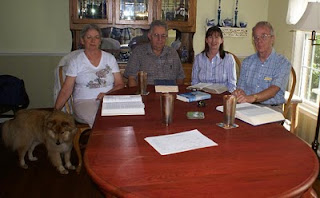 Lynchburg May 16, 2010: Janice Bain, Dick Bain, Rhonda Richardson, Wandering Urantian
Thanks to Dick Bain for the new photo of me for the Blog, I was getting tired of the kayak.  I may try to get out a short blog while on the Canyon trip, see you then.
Posted by Doug at 8:50 AM