#4: Santa Rosa Beach, FL. Last week I moved from DeFuniak Springs Florida to Santa Rosa Beach, less than forty miles, so I could be closer to other readers in Destin and Fort Walton Beach; there is also a group in Pensacola but I will miss their meeting night. I arrived with only a minor incident: I managed to chop my head off. I am at the Topsail Hill Preserve State Park. The sites are spread out more than some parks and it is within walking distance of the Gulf, about a mile or so. It is somewhat more expensive than I like, but five miles down the road I could park right on the Gulf and pay twice as much. 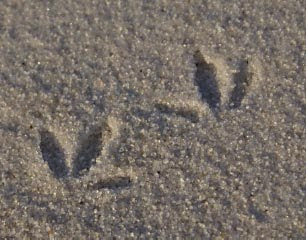 Almost forgot, a few years ago (1988!) while camping in Santee State Park in South Carolina I managed to catch a large bass (after which I no longer had an interest in fishing) and in honor of the event Laree (my brother’s wife) made a ceramic figurine of me (well, sort of like me) holding a large fish. It was this figurine that lost its head during the journey from DeFuniak Springs. She assures me it can be fixed when I get to New York State, but until then I will have a headless fisherman. 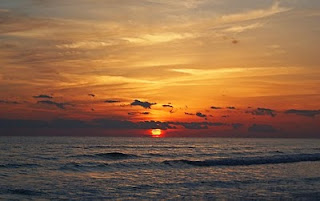 The other day, after doing a few chores I decided to take a walk along the trails in the park. I took my camera and left at about 1:30 in the afternoon. There was little chance getting lost even though the trail map I was given had no relationship with reality since new roads and been cut across the trails. With the Gulf of Mexico a mile to the left and US 98 a mile to the right I could just wander about. There was not much to take pictures of but I took them anyway. By the time I got to the beach it was about an hour to sunset so I took my time walking along the shore and got some interesting sunset pictures. It was after 6:30 before I got back to the Wyoming and I had taken 144 pictures; aren’t digital cameras fun! 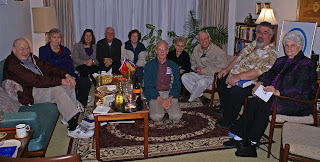 Ron Shreve, Barbara Snow, Linda Burman, Donald Ware, Erika Anthony, Wandering Urantian, Joyce White, Alan Abel, John Dirian, B B Anderson
Wednesday night I went to the discussion group at Donald Ware’s house. Fortunately Ron drove me; I would have been lost a dozen times! As the picture shows, it was a well attended meeting; that is about the right number for interesting discussions. Some groups, like the ones in Lakeland and Brandon Florida like to read for themselves while others like our group in Summerville SC and this one in Fort Walton Beach prefer to use a recorded version. By the way, every group needs someone like B B to ask frequent questions and keep us on our toes; for some reason I have never been much of a question asker. They are an ambitious group; they started at paper 38, “Ministering Spirits of the Local Universe” and read into paper 39, “The Seraphic Hosts” up to section 5 “Planetary Helpers.” While reading page 420, paragraph 4 the question arose about Seraphim being negative and positive; what does this mean? As frequently happens while reading the Urantia Book, the answer came shortly thereafter, page 422, paragraph 2 where they state one Seraphim is energy positive and the other is energy negative.

Next week I plan to move to Louisiana, east of Baton Rouge where there are a lot of readers, none of whom have answered my emails yet.
Posted by Doug at 2:59 PM