#2: February 3, 2010
Dade City Florida. I do not plan to write one of these every week, but I wanted to send this out before I leave the Town and Country RV Resort. This is a clean and well managed facility. I had planned to leave Wednesday morning, but it rained so hard Tuesday that I decided to wait a day longer to let things dry out a bit.

Sunday I walked the trail for the last time before leaving for the season. There was a cute little armadillo along the trail (OK, I know they are pests!). I did not have my camera, but I did have my cell phone. I got within three feet and took a close up picture, but later discovered I did not save it, so you are spared the armadillo! I planned to walk six miles, but just before I got to the two mile mark (each mile is marked on the trail) hunters somewhere near the trail started shooting so I turned around a mile early and only walked four miles. I didn’t know what they were hunting; I just hoped it wasn’t me! (Actually I wouldn’t mind seeing the Mansion Worlds, later.) 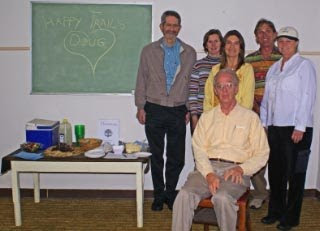 Walt Childs, Cindy Selph, Pamela Farr, Bill Beasley, Share Beasley. In front the Wandering Urantian.
Monday evening the Lakeland group met at the Mosswood center for Spiritual life at the Lakeland Westminster Presbyterian Church. Before starting there was a moment of silence followed by a prayer. We started reading at section 9 of paper 122. The first section contained the poem sung by Simeon at the presentation of Jesus in the Temple. Immediately Cindy obtained a Bible and found the account in the Bible (Luke chapter 2 starting at verse 29) and the two accounts were compared. The Biblical account only contained the last five lines of the version in the Urantia Book which has 23 lines. We had interesting discussions, one observation that was made, possibly more than once, was how real it all seemed, we could readily picture Joseph and Mary and their Son. In an earlier meeting, as we read about the trip to Bethlehem and the discussions Joseph and Mary had at night under the stars, it was remarkable how real it seemed as they talked about politics, current events and about their child to be just like countless other couples over the ages.

After the readings, we had a light snack and said good-bye. The readings were over by 6:30 or so, some had to leave soon thereafter, but the conversations went on for a couple of hours more. I do enjoy just being with good people.

When I had the people lined up for the picture I took a trial shot to see that everything was right; then I set the timer and got in the picture myself. Later I realized there was little movement between the pictures (except the Beasleys, they never stay still) so when I switched between the two pictures it looked as if I were just popping in and out of existence. Interesting effect; it would be neat to post it that way, but I don’t know how (if there is a Blog or Photoshop expert out there, let me know).

Many years ago I used to write a little poetry. I may sneak one in from time to time; the following was written November 8, 1991 (the last poem I have was written in September 1992).

Spiritual Rebirth
I have been a shadow on the wind,
No more than a passing breeze
Wandering in from some long
Forgotten swamp of days gone by.

Will the day come when I shall
Stand and face the world of Truth?
I’ll clothe myself within His will,
Singing His Praises evermore.
Posted by Doug at 10:26 AM