# 30:  I am now parked in Dade City, Florida and plan to be here for a month or two before moving on again.  The journey from South Carolina to Jacksonville to Dade City was uneventful, which is fine with me while I am pulling my house on wheels.  After I was parked at Jacksonville and settled in, Betty Lou, President of the Urantia Association of Florida, traveled there by train and joined me.  The next day she presided over a meeting of UAF that went very well.  Then for a week and a half the two of us leisurely traveled down the east coast of Florida, parking at New Smyrna Beach and Fort Pierce meeting with students of The Urantia Book, finally parking in Lake Worth, just south of West Palm Beach where Betty Lou returned home.  After a jaunt to the Miami Book Fair I came here to Dade City so I could catch up on things and start planning the next excursion.


“The world is filled with hungry souls who famish in the very presence of the bread of life; men die searching for the very God who lives within them. Men seek for the treasures of the kingdom with yearning hearts and weary feet when they are all within the immediate grasp of living faith.  Faith is to religion what sails are to a ship; it is an addition of power, not an added burden of life.”  The Urantia Book (1766.4) (159:3.8) 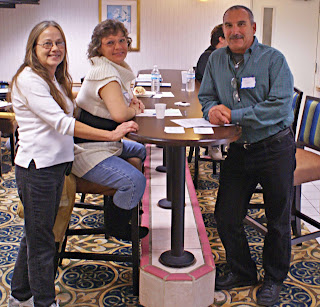 About twenty attended the UAF meeting in Jacksonville.  Unfortunately we did not get a group picture, so the above will have to do.  New members joined and all members sat through and participated in a rather long business meeting.  New associate member Cheri brought her son and his wife who are also readers and they brought youthful energy to the gathering.  It is encouraging to see young people interested in the revelation, more on this below.
After the meeting we had a recovery day before Betty Lou and I headed out on our southward excursion.  Once parked in New Smyrna Beach we drove to Palm Coast to meet Bob at Hooligan’s restaurant where we shared an enjoyable two-hour dinner and conversation.
One of the highlights of this tour was a jaunt to Daytona Beach to meet with the artist Perego (Art of Perego).  As you can see, he dressed up especially for the occasion.  First was a tour of the area where his art works are displayed.  There are buildings with his art covering the outside walls or displayed on the inside.  One fascinating display was at the local Harley Davidson dealership (the largest in the world) that has his renditions of well-known people painted along the walls.  I understand they are planning a museum there.  When he was introduced to the lady behind the counter she positively beamed.  There is another building farther south, near I-95 going toward Miami, that looks as if it is covered with arches and doorways; the outside of this entire multistory building is another of his paintings.  Recently he is into high-energy performance art.  By the way, the gentleman depicted in this painting was seated nearby in the restaurant (Caffeine Bistro and Wine Bar in Ormond Beach) where this and other Perego paintings are located, his mustache is the same but his face and hands are no longer blue. 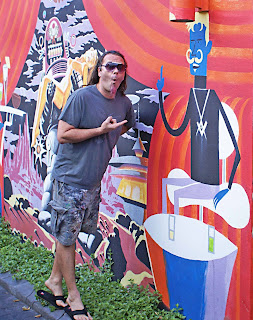 After dinner with Perego we hurried back to the campground for a meeting with Michael who has a web radio program and is involved in several other fascinating endeavors.  He even sold each of us a small thingy to put on our cell phone batteries that are supposed to eliminate harmful electronic radiation.  After installing hers, Betty Lou’s phone felt cool to the touch; she insisted it had previously always been quite warm.
While at Fort Pierce we picked up Vern and went to Lib and Hermann’s for a study group meeting, there were about eight in attendance.  Hermann even had handouts prepared for the meeting where we read Paper 63 “The First Human Family.”  At the conclusion of the meeting we conducted a memorial for Darrel who has graduated (on my stop in Columbus Ohio last spring, Scott’s group had a remembrance for Darrel, he had not yet passed on but was then getting weaker; Darrel had connections with both groups).  After the meeting five of us went out to dinner.
In this photograph, Betty Lou’s chaperone Ira, a very imposing frog, is resting happily between us. 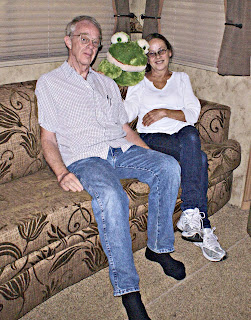 After a couple of days for recuperation, Betty Lou, Katy and I went to Miami for the book fair.  We arrived Thursday afternoon to sign in and take boxes of books to the booth, which was supported by the Urantia Association of the US.  Friday the attendees were mostly school children while Saturday and Sunday there were more adults and families.  Betty Lou thought there were not as many people as previous years, but as the photograph shows, there was still a good many there.  We did not sell a lot of books and some books were damaged by rain, but it was an invigorating experience.  It was a pleasure to talk about the epochal revelation to those who stopped by.  The most important thing is to give them food for thought; when they are ready they will seek out more Truth.  Our booth was not flashy, but often we noted young children looking into the booth with interest; some stopped and looked at the posters, commentating on them to their parents.  It almost seemed as if they were spiritually drawn to the booth.  One boy who appeared to be about eleven stopped to read from one of the open books for several minutes.  We gave him a couple of pamphlets and he went on his way.  Later I went to a nearby exhibit building showing works from China.  He was also there and he was carefully holding our pamphlets (the only ones he carried) as if they meant a lot to him.  When he is ready he will have the information.  There are young people who are Seeking; it is up to us to find them, or so to live our lives that they find us. 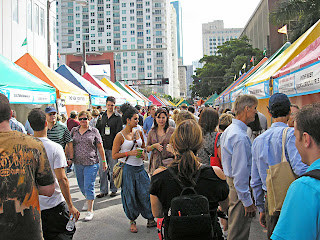 “Truth cannot be defined with words, only by living. Truth is always more than knowledge…  Knowledge originates in science; wisdom, in true philosophy; truth, in the religious experience of spiritual living. Knowledge deals with facts; wisdom, with relationships; truth, with reality values.”  The Urantia Book (1459.2) (132:3.2)