# 26:  Next week I fly to Salt Lake City for the Fellowship’s International Conference.  I met readers in Florida, Texas and Washington State who suggested I go, so how could I decline?  I am looking forward to meeting readers from around the world.  I guess that means I need to finish Alaska before I get too far behind, so I must hurry through the rest of the journey.  I have not been to any study group meetings recently; hopefully I will make up for that in the posting after the conference.

“You cannot reveal God to those who do not seek for him; you cannot lead unwilling souls into the joys of salvation. Man must become hungry for truth as a result of the experiences of living, or he must desire to know God as the result of contact with the lives of those who are acquainted with the divine Father…. If we know God, our real business on earth is so to live as to permit the Father to reveal himself in our lives, and thus will all God-seeking persons see the Father and ask for our help in finding out more about the God who in this manner finds expression in our lives.”  Jesus speaking to Ganid.  The Urantia Book (1466.2) (132:7.2) 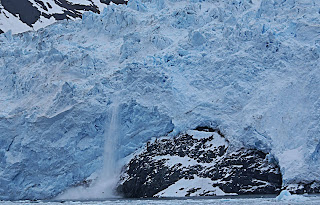 Now back to the Alaska tour, which we left last time in the Kenai Peninsula.  The next major event was a cruise from Seward (pronounced Souward), the full length of Resurrection Bay, into Aialik Bay and up to the Aialik Glacier, shown above.  Along the way were beautiful sights of the snow-capped mountains, small islands and wildlife.  I photographed a Sea Otter taking a nap while floating on his back, a Humpbacked whale, a pair of Orcas (killer whales), a Puffin, a rock wall covered with Artic Terns, and Sea Lions where the large male was bellowing out orders.  While the ship stood just off the glacier there were many loud noises but we saw no icebergs falling off.  On the way back to port the ship had a special on Margaritas made with glacier ice. 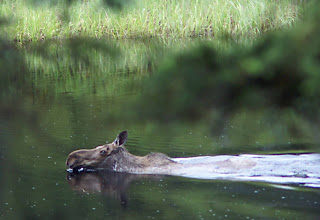 The next day was a free day at Denali, which worked out well because everyone could choose what they wanted to do.  I had signed up for a guided hike in the morning and wondered about the weather, this was the only rain we had the entire trip but the rain was light enough not to interfere with the hike.  The walk was enjoyable through the wet woods and the highlight of the hike was a close encounter of the Moose kind.  We stopped at the end of a lake and spotted a female Moose at the far end of the lake.  I took my time getting out my telephoto lens and got a good picture of her.  Shortly after that we were walking along the lake, on a trail that was uphill and perhaps fifty feet or so from the shore when we saw the Moose taking a swim.  She then got out of the water and began charging up the hill toward us.  I took one photo that shows her large body behind a nearby bush, too close for the long lens.  She got to within about thirty feet of us before the tour guides waved their arms, shouted and shooed her away. 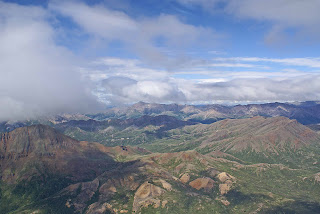 That afternoon the weather cleared up and I was able to take a helicopter ride up to a glacier.  This flight over the Alaska wilderness was truly memorable.  We were seated in the helicopter according to weight and I was given the back window seat.  Along the way we saw Dall’s Sheep and Caribou but both were a bit too far away to photograph well.  The scenery was stunning; the above photo only gives a small taste of the sights.  As we landed on the glacier the music in our headphones was Satchmo singing “It’s a Wonderful World,” probably planned that way but a nice touch anyway.  We were able to get out, walk around and take pictures from the top of the glacier.

From Denali we went south to Talkeetna where we stayed two nights.  While there we went on a jet boat ride.  The boat was large enough for all 47 in the tour group; after a leisurely ride upriver the boat pilot stopped and asked us all to buckle our seatbelts.  We then went over Class IV rapids and stopped just short of Class VI rapids that had exposed rocks.  This area is called Devil’s Canyon, naturally.  He held the boat in place for fifteen minutes so we could all take plenty of pictures.  The last evening in Talkeetna the clouds lifted and the mountain came into full view.
Alaska, the great land indeed!
"On the seven mansion worlds [where we go after physical death] ascending mortals are afforded ample opportunities for compensating any and all experiential deprivations suffered on their worlds of origin, whether due to inheritance, environment, or unfortunate premature termination of the career in the flesh." The Urantia Book (516.1) (45:6.3)