# 16: Well, I am on the road again! After leaving the Hidden Valley campground near Jamestown NY, I parked two weeks in Bath NY. The first weekend I went to the UA NY – PENN 8th Annual Fall Conference in Waverly NY which is directly on the Pennsylvania state line. While parked in Bath I also went to Letchworth State Park which is a magnificent sight. From there I went east to I-81 south, stopped in Maryland one night and am now in a campground in Lexington Virginia. Maryland is the sixteenth state (plus Ontario) I have visited this year. I plan to leave here next week and will be in Ladson South Carolina next Thursday or so and expect to stay there for about five weeks.

The first meeting in Waverly was a social gathering Friday evening. I was driving down a narrow dark street in the Monster (Ford F350) looking for the street to turn onto, but was having trouble seeing the street signs which were covered by tree branches (they were even difficult to see in the daytime). I knew I was well past the turn and was looking for a place to get directions when I saw what appeared to be a woman and two small children walking along the dark street dragging suitcases. I wondered if they had been evicted from their home. I passed them by, but later I realized that I should have stopped and asked them for directions and offer to help them, that is the way Jesus would have handled the situation.


“The beauty and sublimity, the humanity and divinity, the simplicity and uniqueness, of Jesus’ life on earth present such a striking and appealing picture of man-saving and God-revealing that the theologians and philosophers of all time should be effectively restrained from daring to form creeds or create theological systems of spiritual bondage out of such a transcendental bestowal of God in the form of man. In Jesus the universe produced a mortal man in whom the spirit of love triumphed over the material handicaps of time and overcame the fact of physical origin.”  Urantia Book (2084.2) (195:10.2) 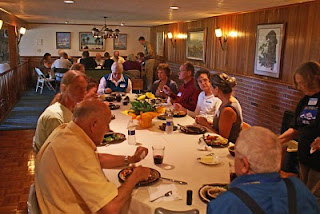 The Waverly conference was held at the lovely home of Ralph and Betty Zehr overlooking the beautiful New York state countryside.  As with all such conferences, it was attended by a wide variety of Urantians.  It is always a joy to meet and be with such people.  There were people from Ohio, Pennsylvania, Vermont, New York State and Canada.  Gaetan Charland, president of UAI gave an interesting talk about his work assisting Urantia Book study groups all over the world.  There were also three workshop sessions.  Planning for and hosting a small conference such as this gives something for a study group to concentrate on besides just reading the book all the time.  These mini conferences are an excellent idea. 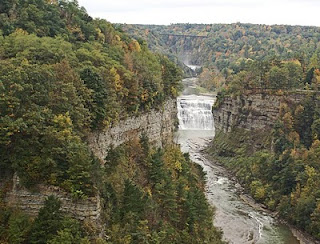 I spent one cloudy day exploring Letchworth State Park; I hoped to do more exploring there but the weather was wet and rainy most of the time I was in the area.  The park straddles a gorge formed by the Genesee River south of Rochester, in places the cliffs are nearly 600 feet high.  The leaves were starting to turn colors but they did not show up well because of the poor lighting. One rainy day while I was still in Bath NY, a Pileated Woodpecker was looking for lunch on a tree next to my parking space. I tried to use my long lens to get a picture, but the light was too dim. In one photo it looked as if the bird had two heads because he was working the tree much faster than my shutter speed. Yesterday as I was returning from a drive on the Blue Ridge Parkway here in Virginia, a Pileated flew in front of my windshield while I was waiting for the traffic light to change.
Monday I will drive to Lynchburg and visit Dick Bain and possibly some of his study group. I need to get better at timing my stopovers to coincide with meeting nights.
Posted by Doug at 11:49 AM