#6: Hammond Loiusiana.  I now have an email address to match this blog: WanderingUrantian@Disciples.com future blog notices will come from that address. If you have questions you may send them to either address. With everything going on here in southern Louisiana it is difficult keeping this blog up to date. In the last week I participated in a web cast, had a tour of New Orleans and took a trip to the Louisiana Bayou. As I start writing this it is nearly time to get ready for a reader’s group meeting in Madisonville, which is east of Hammond.

Last Wednesday I went to Virginia’s for the web cast of their meeting. Since Peter could not make it, there was only Virginia, Charles and myself. When I arrived for supper, the piano tuner was at work with occasional comments from their dog; it seemed only certain notes made the dog unhappy. The piano tuner finished at exactly the time the web cast was to start; on it we read Paper 36, The Life Carriers. If anybody watched, please let me know how it looked. 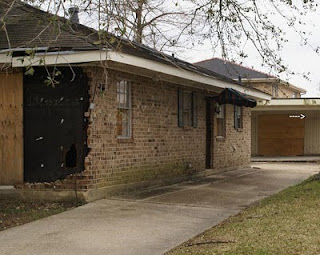 The next day Peter took me on a native’s tour of New Orleans with the first stop at an old cemetery where he told me its history. Somehow it reminded me of the scene in the “Phantom of the Opera” where Christine visits her father’s grave, except there was thankfully no snow on the ground even though it was cold and windy.

The next stop was along the canal which had failed during Katrina. The wall along the canal appears about ten feet or so high and sits on a bank which is at least that or higher. Even now the water is nearly at the top of the restraining wall, far above ground level where the houses rest. Most of the houses have been restored; the one pictured above is about three houses in from the canal. It is difficult to see in the photograph, but the arrow near the right edge points to the high water line from the flooding.

We then parked the Monster and took a streetcar named St Charles downtown; we looked for the one named Desire which had been on display, but apparently it did not survive Katrina. By the time we neared downtown the streetcar was filled with both tourists and locals. Along the way Peter explained that wide green areas are called “Neutral Ground” here, a legacy from previous times when they separated French and Spanish areas from the Americans. We walked the Quarter and sampled tasty pastries covered with powdered sugar; I will not dare to attempt spelling their French names. While riding the St Charles back to the Monster I got two phone calls, one was from Anthony inviting me to Morgan City. 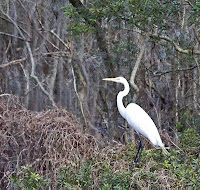 Morgan City is in the Louisiana Bayou, about a two hour drive south from Hammond so I got up early and was in Morgan City before ten. Anthony said his office is on the fourth floor of a bank building and I had the address but I could not locate it. Fortunately there are only two buildings that tall in Morgan City and the other one is the Hospital so it was just a matter of driving around to find how to approach the bank building.

Anthony is truly filled with the spirit and bubbling over with words. We had long talks about the Urantia Book and just things in general. Lunch was shrimp Po’ Boy’s (fried shrimp on French bread). His main job is AB Marine Consulting which inspects boats for insurance companies and owners.  He also rents out houseboats under the name Cajun Houseboats, allowing people from all over to have a few days on the Bayou. In the afternoon a movie producer from the Sci-Fi channel came enquiring about houseboats as he is planning to film a movie in the area. During the meeting I just sat there, not participating; later the director’s assistant left the room and Anthony went to get something so I was left alone with the producer. When he asked about me I launched into a discussion of my travels and the Urantia Book, I also gave him a flier about Sheila’s book and the address of this blog. He seemed to be personally interested, not professionally interested. We then went to look at houseboats and to see the Bayou. The egret was perched alongside the road; Anthony stopped his van in the middle of the road so I could take the picture. We also saw three Great Blue Herons and a Bald Eagle within a couple of miles. The last stop was to see a houseboat at a Bed and Breakfast run by a Cajun couple who have a broad Cajun accent. I took a couple of pictures of Jeff, his grandson and the Australian Shepherd dog which had been trying to herd the boy, but this is long enough already. After my first meal of Crawfish and a couple of hours of conversation it was time to head out; it was nearly midnight when I got back to Hammond. 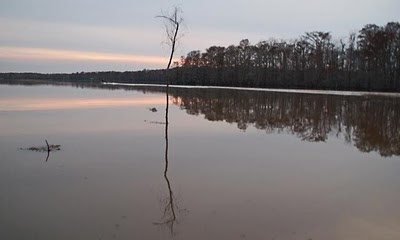