#73; Parliament of the World's Religions

Greetings this holiday season, may it be joyous and peaceful for everyone. Students of The Urantia Book know Jesus was born in August not December; to us it means that Jesus is extra special and gets two birthdays. BettyLou and I recently returned from the Parliament of the World’s Religions in Toronto Canada. It was a thrilling experience to meet with people of different faiths and cultures from around the world. We attended three days; it did not appear to be as large as the 2015 Parliament in Salt Lake City, even then more than 8,000 people were at this one. We also have an announcement to make, so let’s get started.

We made an exciting discovery at the Parliament, more on this below. In honor of this discovery, the theme of quotations in this posting will be global sovereignty.

Peace will not come to Urantia until every so-called sovereign nation surrenders its power to make war into the hands of a representative government of all mankind. Political sovereignty is innate with the peoples of the world. When all the peoples of Urantia create a world government, they have the right and the power to make such a government SOVEREIGN; and when such a representative or democratic world power controls the world’s land, air, and naval forces, peace on earth and good will among men can prevail — but not until then. (Urantia Book p 1489.3) 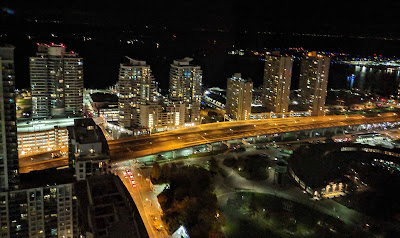 View from our hotel window
The flight to Toronto was uneventful and we arrived early evening. There was a shuttle train from the airport to the city center. From there we had an enclosed walkway from the terminal to our hotel. Before we got to our hotel we heard someone calling us, it was Dede, the leader of our study group from Hendersonville, North Carolina. We knew she was at the parliament but had no idea she would be there to greet us; she just “happened” to be passing by as we arrived. There was also a covered walkway from our hotel to the convention center where the parliament was held. There was no reason for us to go outside for anything.

The above photo was taken from our room; if you look carefully, in the upper right of the photo is a faint string of lights. Those lights are in the United States on the other side of Lake Ontario. 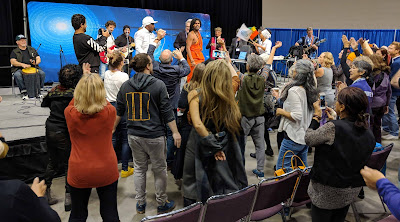 Pato Banton in concert
There were so many events that it was not possible to attend more than a tiny fraction. One of the most joyous was a concert by reggae singer Pato Banton in the white cap and jacket above. One of his songs is “Life is a Miracle;” it was impossible to sit still during his concert as you can see.

The Urantia Book booth was well attended and active. I understand more than 70 UB students were in attendance. Several of the other booths I visited were familiar with this revelation.

I will only mention a few booths that grabbed my attention. One such was the Canadian Multifaith Federation, founded in 1972; today it has over 30 faith groups. It advocates for spiritual and religious care in institutions; we purchased a chart there that depicted the Golden Rule as stated by 13 different faiths.

Children’s theater
While waiting for our flight in Charlotte I noticed a young man wearing a black top hat, strange costume for a flight. The next day at the Parliament I discovered the Children’s Theater shown above. Top hat wearer is playing drums in the lower left corner of the photo; the puppets told stories for the children.

The Sikh religion had a large presence at the Parliament, for example every noon they held Langar , which is a free community kitchen. This practice of free lunch was initiated more than 500 years ago and its purpose is for everyone to sit and eat as equals.[1]

BettyLou and I were exploring the various exhibits when we became interested in the Shumei booth.  Their founder, Mokichi Okada taught that a world free of sickness, poverty, and strife could be achieved through spiritual healing, a reverence for nature, and the appreciation of art. We naturally knew nothing about their organization. They asked us to sit down and close our eyes for about five minutes while they appeared to stand before us and hold their hands over our heads. Partway through the procedure, (some sort of spiritual healing) I was more aware of sounds around me and I began to feel energized. Both of us felt rejuvenated by whatever it was. The effect lasted for some time; we even returned the next day for another treatment. 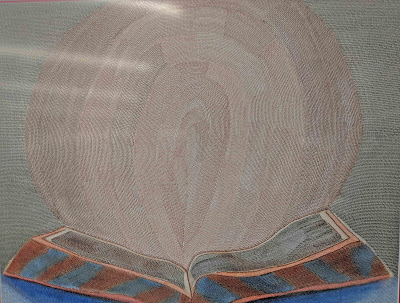 Mantra art
The reflective mantra art by Dr. Juss Kaur was an impressive series of paintings. Each element of the paintings is a single phrase repeated over and over, a technique called pointillism. The language is similar to Sanskrit and the phrase translates roughly as “the infinite divine teacher within each sentient being.” Sounds like our Thought Adjuster.

The last day I felt compelled to look for a booth that I had visited earlier; I kept looking for one that had stacks of blue paperback books. I had spoken to the one manning the booth briefly and was surprised he knew about The Urantia Book. Now I had to get one of those books. I felt led to that booth; it was sponsored by the World Constitution and Parliament Association, which is the creator and sponsor of the Constitution for the Federation of Earth. This Constitution is an impressive document outlining the structure for a government based on the sovereignty of all mankind; exactly what the following quote says is the way for Earth to achieve world peace.

I will soon start another blog promoting my book “Light of Truth, Dark Forces are Operating on Planet Earth.” There will be an email announcing the blog and inviting each of you to subscribe; please respond to that email if you wish to be added to the new blog list.

World peace cannot be maintained by treaties, diplomacy, foreign policies, alliances, balances of power, or any other type of makeshift juggling with the sovereignties of nationalism. World law must come into being and must be enforced by world government — the sovereignty of all mankind. (Urantia Book p 1491.3)

All photos were taken by a Pixel 2 phone.